Despite improvements in the condition of women under the Kurdistan Regional Government, cases of self-burning by Iraqi Kurdish women still take place. 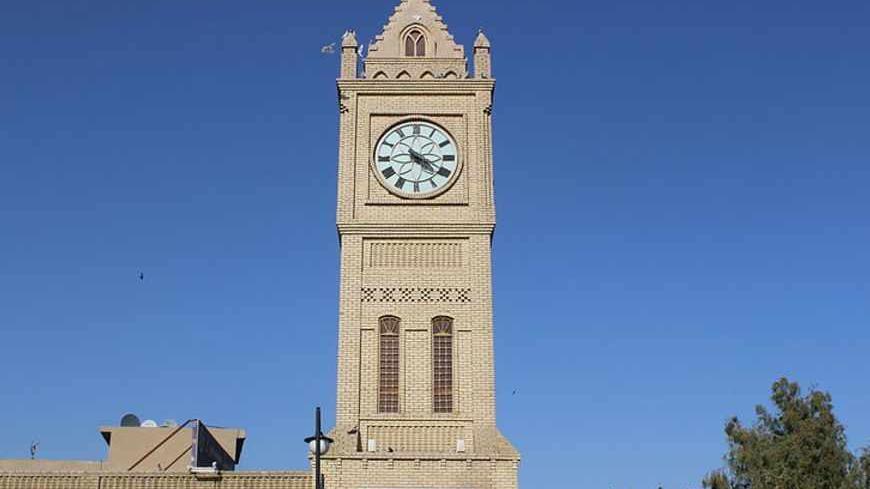 This Erbil clock is seen on April 8, 2013. Many Kurdish women who decided it was time to end their lives by setting themselves aflame have survived and wound up being treated in an Erbil hospital burn unit. - Kushared

Berma, 26, lies in a white hospital bed in the female burn unit in Erbil. Her body lies in an uncomfortable position — because her legs are not allowed to touch the bed — and her eyes show she’s in a lot of pain. Her husband and four children are nowhere to be found; only her best friend stays with her the whole time. The friend softly caresses Berman’s head, the only place on Berma’s body that has no burn marks.

The Kurdistan Region of Iraq is relatively safe, its economy is flourishing and it is regarded in the West as a liberal haven in an often conservative region. But since the fall of Saddam Hussein, there has been an alarming trend — more than 1,000 women have died after setting themselves on fire. Berma is one of the young women who probably burned herself, although she will never admit it.

“One day, the family of my husband came along for a picnic in the village. We ate a snack and drank some tea. It was a nice day. At home, I washed the cups and spoons in the kitchen. All of a sudden I got really cold," she whispers. “So that’s why I turned on the heating stove. When I put the kerosene in the stove, I forgot to cut off the electricity. The thing exploded and I caught fire. It was an accident."

In Iraqi Kurdistan, and Kurdish parts of Turkey, self-burning is known as the usual method of suicide attempt by Kurdish women. Often, it is a way out of abusive situations, like domestic violence or social injustice. Therefore, in Iraqi Kurdistan it is classified as violence committed against women.

When she is being asked if she is happy with her husband, Berma pauses for a brief second. “I was 16 when I married him. No, it was not a forced marriage. He was a friend of my cousin." She avoids the eyes of her friend.

Rosh, a male nurse in the female burn department, says the story about the stove is probably false. Lack of electricity means that every house has a plentiful supply of oil and while some cases may be accidents, the nature and scale of the injuries suggest that most major burn cases are deliberate. “It almost looks like a code: When a woman mentions the stove, we all know that it was self-inflicted. We cannot do anything about it, unfortunately."

Rosh points out that if the suicide doesn’t succeed, the woman is likely to be punished by her family if they find out it was a suicide attempt. Going to the police is also generally not an option, as most of the women have had bad experiences with asking for help. That’s why the women hardly ever admit that the burns are self-inflicted.

Although the Kurdistan Regional Government has passed laws and tried to improve the rights of women for years, these cases still continue in large numbers because there is nothing to provide for the laws’ implementation. Nongovernmental organizations, for example, have asked the government for special departments and courts where domestic issues can be resolved.

Rosh says, “Sometimes it’s a cry for attention, because they don’t know what to do to change their bad situation. Mostly poor, young and uneducated women are affected by this."

He takes care of the burned women every day, sometimes for months, but even during this intensive treatment they refuse to tell him what really happened. “When they are brought to the emergency room, most of them are already dead. Others are close to dead and suffer from extreme pain; 65% die before we can even help them.’’

Nearly 3,000 cases of violence — including murder, suicide, self-immolation, beatings and sexual harassment — were recorded in Iraqi Kurdistan in 2012, the government reported, but women’s activists say the numbers are severely under-reported.

Burn injuries remain a major concern for health authorities in this region, where published data on the nature and size of the problem are scarce. But in 2011, around 150 women set themselves on fire in the Kurdish region, a hospital representative says.

In another room lies Mediya, 39. Her body is completely wrapped in white bandages. She doesn’t have much family left, because most of them died during the Iran-Iraq war in the 1980s and the Iraq war in 2003. Her younger cousin provides food and drinks for her, just as Berma’s friend does.

"My nylon dress caught fire because of the uncontrollable heating stove. It all went so fast, I can’t really remember it. The neighbor heard me screaming and ran upstairs to put me in the shower," she adds.

Mediya’s husband died during the last war, and after that she had to flee to another country. She is originally from Iran, but says she cannot be herself over there, and that’s why she’s always traveling back and forth. Like many other Kurdish women, she also denies that the burning incident was self-inflicted.

Silently she weeps. The tears are sliding down her cheeks, down to her neck, toward the bandages on her chest. Her cousin gives her a paper towel. “I didn’t pay enough attention. It was a mistake," Mediya continues.

In the police department of the hospital, the officer shows a few documents about burning cases that happened during the last couple of months. The files are all closed. Without the actual testimony of a victim, police officers are not allowed to start an investigation.

"These victims did not suspect that they would survive the suicide attempt. Now, they are really desperate and unhappy because they are still alive. Most likely they will try it again," the officer says, and points out a timetable showing the daily temperatures during the latest burn cases. When Berma and Mediya caught fire “because of the heating stove," it was between 28 and 32 degrees Celcius (92.4 to 89.6 degrees Fahrenheit).

Brenda Stoter is a Dutch journalist who writes about Egypt and Syria and about Kurds in Iraq and Turkey. Her articles have been  published by Al-Jazeera, as well as being featured in Dutch national newspapers and magazines such as Algemeen Dagblad, NRC Next, Het Parool and Elsevier. On Twitter: @BrendaStoter