Israel closely follows the change of leadership in Qatar, and the impact of the change on the Arab Peace Initiative. 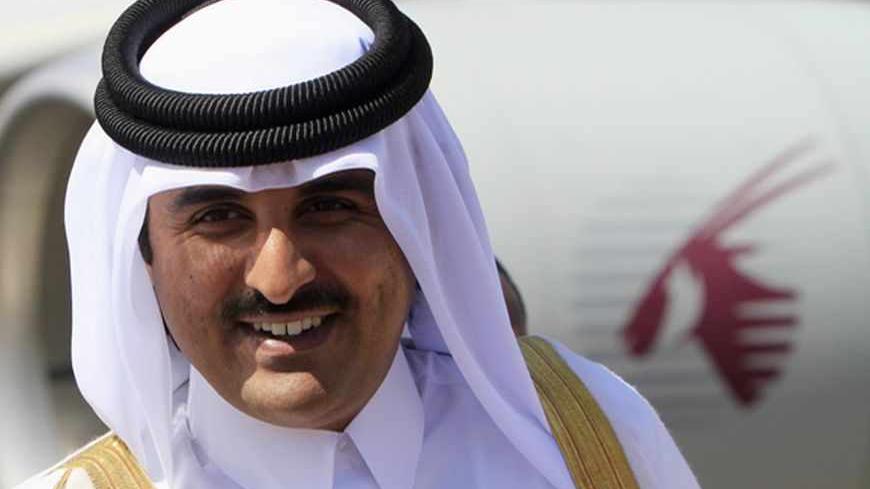 Hamad bin Khalifa Al Thani had a big surprise in store for the entire Arab world. While at the height of power and influence after 18 turbulent years on the throne, the 61-year-old emir of Qatar handed power to his second son, Tamim, 33.

The first hint of the emir’s impending retirement was provided to Al Safir newspaper on June 11 by Muhammad Ballout. The news also appeared here in Al-Monitor. Many unanswered questions about the timing and reasons for the abdication have been raised since then, and up until the official announcement. Will the emir’s young son succeed in filling his father’s shoes and continuing his policies, which transformed the tiny emirate into a major influence in the Arab world?

Al Thani was quick to recognize exactly what Qatar’s weaknesses were. It is a tiny state, but it also has vast natural resources. He realized that in order to ensure that none of his neighbors coveted Qatar — just like Iraq coveted Kuwait in 1991 — he must implement sage policies, which would create thick defensive walls around the vulnerable emirate and keep any hazards and threats at a safe distance.

Qatar has a good relationship with Iran, and they even share a nature gas field. The emir also fostered and maintained a good relationship with the Muslim Brotherhood in Egypt and in general, because he immediately recognized them as the most significant rising force in the turbulent Arab world of the 21st century. At the same time, he also maintained an open foreign policy toward Western nations, and especially with the United States, which regards Qatar as a strategic ally of the first tier. The large US naval base in Qatar offers a consummate guarantee that the country will be defended from any unanticipated threats. Over the last two years, Qatar also became a major factor in the “Arab Spring.” It openly supports the Syrian rebels and provides them with money with which to buy arms. One of the most important triggers of the Arab Spring was the Al-Jazeera news network which, according to many in the Middle East, served the interests of the uprisings that took place from Tunis to Syria. Al-Jazeera was created by the departing emir and was, in effect, his “baby.” Through it, he could loom over the other Arab leaders.

The rest is history.

And like so many others in the Arab world, who believe that the road to Washington passes through Jerusalem, Al Thani maintained reasonable ties with Israel, even during the second intifada. By doing so, he paved the way for closer trade relations with the United States. He earned legitimacy, not only in US Congress but even among American-Jewish organizations.

Which leads us to the ultimate question: How will his abdication affect the Arab League’s Peace Initiative, which, for now, is the only peace initiative? Qatar was one of the leading advocates of this plan — which was approved again and again — to renew negotiations between Israel and the Palestinians. Last May, the emir said that the wave of uprisings across the Arab world increased pressure on the parties to find a solution to the Palestinian-Israeli conflict:

''… The Arab Spring has today put Israel in direct confrontation with the Arab people, not only with their rulers. These people will no longer accept that negotiations are the goal in themselves."

Prime Minister Hamad bin Jassim bin Jaber Al Thani is likely to retire with the emir. While visiting Washington on April 30, the prime minister proposed the exchange of territories between Israel and the Palestinians as a way of improving the Arab Peace Initiative.

More properly, Jaber Al Thani will ''be retired.” It seems as if the abdicating emir truly “appreciated” his prime minister’s talents, which is why he kept him on a short leash. So much so, in fact, that for many years the emir brought him along on all his international travels, whenever he left the country. He was worried that Jaber Al Thani might do the same to him as what he did to his father.

On June 27, 1995, Al Thani sent a polite fax to his father, Khalifa bin Hamad Al Thani, who was then vacationing in Switzerland. In it, he suggested the elder Al Thani not return to the emirate. At the same time, several dozen armed officers surrounded the homes of the notable families in the state and demanded that they swear loyalty to Al Thani, who was concerned his father might bring his brother back from overseas to replace him. By the way, it is also worth noting that the person who came up with the idea of seizing power before it was too late was none other than the Qatari Prime Minister Hamad bin Jassim.

Israel is not alone in watching events in Qatar. Hamas is also paying close attention to the surprising change of government in the emirate, which has been its patron ever since the uprising in Syria began. For the past year and a half, the Hamas leader and head of its political bureau Khaled Meshaal has enjoyed the emir’s patronage and the generous aid that he has provided to Gaza after the Iranians stopped their aid to Hamas.

In his parting address on royal Qatari television, the emir said, “The time has come to turn a new page … and have a new generation carry out responsibilities.” Referring to his young heir, he said soothingly, “I am fully confident that he is qualified for the responsibility and is trustworthy.”

Will the crown prince continue to support Hamas, a movement well in the midst of transforming itself from a terrorist organization into a legitimate Palestinian government movement? Will he continue to advocate on behalf of the Arab League’s Peace Initiative and its efforts to resolve the conflict?

Given all the volatile events taking place in the Middle East, it looks like we won’t have to wait long for answers.