Hamas official Khalil al-Hayya discusses the party’s loss of Iranian support and the possibility of its truce with Israel unravelling. 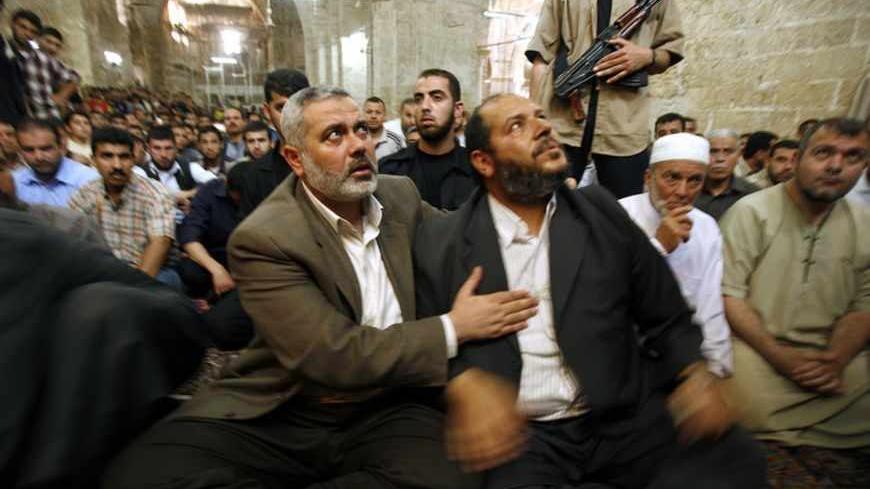 Palestinian leader Ismail Haniyeh (front, L) hugs Hamas politician Khalil al-Hayya during the funeral for seven of Hayya's relatives who were killed during an Israeli assassination attempt, Gaza, May 21, 2007.

Khalil al-Hayya, a prominent Hamas leader in the Gaza Strip and head of the group’s parliamentary bloc in the Palestinian Legislative Council, stressed that there have been concerted efforts to procure financial and military support to cover its losses following the decline of Iranian backing. The dip in Iranian support came as the result of its and Hamas' clashing stances on the Syrian crisis. Hayya added that new support will not hinge on political requirements.

Hayya, 53, lost seven family members in a failed Israeli assassination attempt in 2007. He said that Hamas and Hezbollah's vision is unified, and that there are no disagreements regarding the Iran issue. Hayya also denied rumors of a message sent by Izz ad-Din al-Qassam to the party stressing the need for an alliance with Iran. Hayya denied that armed Hamas militants were inside Syria fighting against the regime, stressing that Hamas is not responsible for individuals fighting on their own accord, as they are acting against the group’s decision.

The following is the text of Al-Monitor’s interview with Hayya, which took place at his Gaza City office.

Al-Monitor:  What is the truth behind Israel's renewed airstrikes over the weekend? Were the rockets fired into Israel from Islamic Jihad?

Hayya:  It is important to note that all Palestinian factions are strictly committed to the truce, which was reached following the Nov. 2012 war in Gaza. However, Israel tries to wriggle out of the agreement from time to time, exploiting the circumstances here and there in order to bombard Gaza. The rockets launched from Gaza were the result of an accident that occurred outside of national consensus, by a group of reckless young people. Perhaps this incident occurred following the death of an Islamic Jihad member, while the police were occupied with their duties. Undoubtedly, this is an unfortunate accident and the government has formed a fact-finding mission comprising many parties, with the participation of Hamas, Islamic Jihad and the family of the deceased. The case will be dealt with according to the law.

Israel tried to take advantage of the missiles that were launched from Gaza, which incidentally did not hit any Israelis. Israel closed the crossings and fired at fishermen in the sea. However, I can say that the truce is still on and the factions are committed to it. It is in our best interests, as Palestinians, to preserve calm. Israel is also required to adhere to the agreement’s obligations and terms.

Al-Monitor:  There were media reports by the Izz ad-Din al-Qassam Brigades highlighting the importance of an alliance with Hezbollah and Iran. What are the real talks among Hamas about this? Is there an internal consensus?

Hayya:  I want to clearly stress that the Qassam Brigades did not send any messages to Hezbollah. These intentional leaks aim to harm Hamas, which maintains a political consensus.

However, with regard to our relationship with Hezbollah, as a people that carry a fair political cause, we very clearly say that we hope to receive financial, political and military support from any international party given that it does not impose unacceptable conditions. This was the case in our relationship with Hezbollah. We disagreed on how to deal with the Syrian crisis, but we have no differences with regard to the Palestinian cause. Thus, we call on Hezbollah to maintain its commitment to this cause and keep its weapons directed against Israel.

Still, we have a relationship with the party, both at the Lebanese level and through political contacts. It is a policy adopted by the leadership of the movement and followed by all its wings, namely the Qassam Brigades.

As for internal differences over this issue, given the size and breadth of Hamas, as well as the presence of disagreements and interpretations among its cadres and leaders in different geographic locations, it is natural to see a diversity of topics. However, I can say that positions are completely homogenous within the movement as long as they have been approved by the leadership. This applies to the relationship with Iran, Hezbollah, neighboring countries, the Palestinian factions and others.

I also want to stress that there are no differences within Hamas on dealing with the Syrian crisis. In its latest meetings at the level of the leadership and political bureau, Hamas came out with full consensus on dealing with all files in question. Despite the different visions and interpretations, we have no differences.  Everybody commits to the decisions adopted by the leadership.

Al-Monitor:  A Hamas official admitted that the party received military support from Iran, Hezbollah and Syria. How do you think the party will compensate with its alliance with Qatar?

Hayya:  I have said that Hamas has a responsibility to mobilize all efforts in the service of the Palestinian cause. Hamas has not cut ties with any side during any stage of the movement’s history, or preferred one party at the expense of another. To the contrary, we enjoy good political relations with all Arab countries. This approach fell within the context of what was formerly called the "moderation and rejectionist" fronts. We have requested support from everyone.

However, I can say that funding has been significantly affected due to the decline of Iran's role. We are currently trying to find alternative sources of funding from all sides and all Arab, Islamic and world countries. However, Hamas rejects support that comes with political conditions.

Qatar, for example, plays a significant role in supporting the Palestinian cause, and we appreciate it. But this support does not come with any political price, as was the case with Iranian support. Thus, we are trying to find new alternatives that would compensate for the fund shortage.

Al-Monitor:  Did the movement receive any support from Hezbollah and Iran during the "mini" war in Nov. 2012 against Israel? If so, to what extent?

Hayya:  When Hamas thanked Iran and Hezbollah for their support in the recent war, it did so out of gratitude. This support came in the form of military manufacturing, advanced rockets and the strategic arms inventory of the Qassam Brigades. This support did not stop after the last war, but before that, since we disagreed on the Syrian crisis.

Hayya:  Hamas does not interfere in the internal affairs of Syria, neither politically nor on the ground. It does not have elements interfering on Syrian territory, despite its support of the goals and aspirations of the Syrian people to achieve freedom, justice and democracy. However, we do not have any role on the ground, except for the provision of some assistance to the Palestinian refugees fleeing from Syria because of the ongoing war. We deny any reports or accusations made against us in this regard by those who seek to twist our position, and give the impression that Hezbollah interfered in Qusair alongside the regime as well as Hamas. These claims are totally untrue.

Therefore, I would like to stress that Hamas, including its political, security and military wings, has no presence on the ground in Syria, although some Hamas supporters or sympathizers are there in their personal capacity, and the movement does not assume any responsibility for their actions.

Al-Monitor:  The Egyptian media recently reported that Hamas militants active in the Sinai are threats to Egyptian national security. How do you assess the security instability in the Sinai? Who do you think is behind the ongoing violence?

Hayya:  Hamas has no interest in meddling in Arab countries, neither in the past nor the future. However, some have an interest in involving Hamas in Egypt's internal political polarization to achieve a number of negative objectives: to impact the Islamic movement in Egypt; fill the Egyptian media with false news in an attempt to provoke foreign intervention; and most seriously, to cause Egyptians to think of Palestinians as their enemies, instead of Israelis. This would be achieved through media fabrications that blame Hamas for all Egypt's security problems.

There are attempts by internal and external parties to turn Egyptians against the Palestinian cause. Unfortunately, some Palestinian parties are feeding these political and security fabrications. We have provided Egyptian authorities with the security information in our possession.

According to security information available to us, all sides concerned with Egyptian affairs are present in the Sinai, especially Israel — whose intelligence apparatus, the Mossad, managed to kidnap a young Palestinian man in the Sinai a few days ago and transfer him to Israeli prison — without the knowledge of Egyptian security authorities.

Therefore, we in Hamas say that Egypt's security is sacred and we seek to maintain it. We find no problem in cooperating with the Egyptian security agencies to exchange information and regulate the security relationship. We do not want to see intruders tamper with Egypt’s security. I believe that the current state of security cooperation between Hamas and Egypt is satisfactory to both sides.

Al-Monitor:  How do you assess the resignation of the government in the West Bank? Do you see an opportunity conducive to the formation of a government of national consensus with Mahmoud Abbas?

Hayya:  The successive political crises being experienced by the Palestinian Authority in the West Bank are a natural result of the Oslo Accords, which were concluded to serve Israel and preserve its security. Oslo did not achieve a state for the Palestinians. Fatah is witnessing a crisis because of this unjust agreement. It cannot provide its employees with sufficient funds, nor can it repudiate security coordination with Israel, which only serves the latter.

The government of Rami Hamdallah was illegitimate and unconstitutional since day one because it did not obtain the confidence of the Legislative Council or a Palestinian national consensus. Unfortunately, Abbas does not place importance on national reconciliation and is not determined to achieve it. He is focused on the tours of US Secretary of State John Kerry and political initiatives, although he has said that reconciliation has reached an impasse. However, he has halted reconciliation in favor of this stalled course.

Finally, Hamdallah’s resignation reflects the political, economic and ethical crises suffered by the Palestinian Authority. We stress that the Palestinian people need unity based on respect for democracy and electoral results. It also has the right to struggle to acquire its rights. The Palestinian Authority wants to act unilaterally without partners. It still does not believe in Hamas as its partner since Abbas went to hold consultations to appoint a new prime minister independent from the rest of the Palestinian political forces.

Adnan Abu Amer is dean of the Faculty of Arts, and head of the Press and Information Section as well as a lecturer in the history of the Palestinian issue, national security, political science and Islamic civilization at Al Ummah University Open Education. On Twitter: @adnanabuamer1