Based on his experience during the Second Lebanon War, former Defense Minister Amir Peretz calls for Israel to “re-examine the scope of the IDF ground or naval forces.” 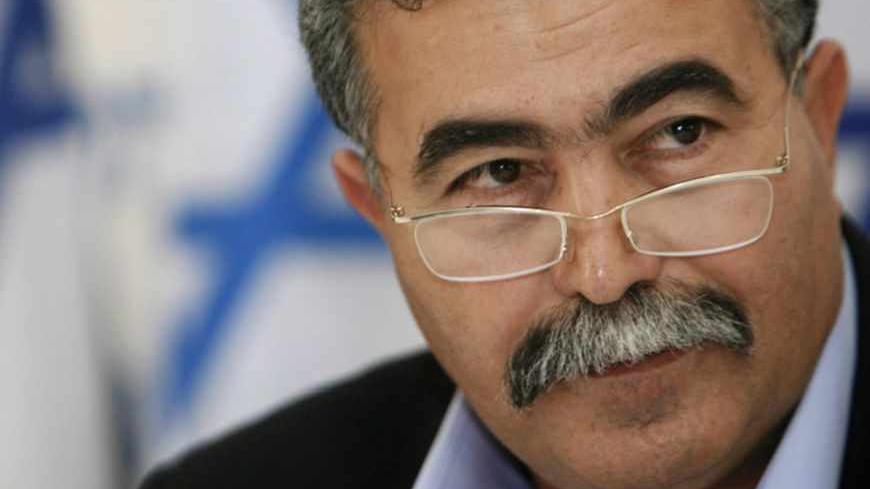 Environmental Protection Minister Amir Peretz is very concerned about the announcement of Chief of Staff Benny Gantz [June 3] regarding cancellation of operational activities of reserve soldiers until the end of the year as a result of the anticipated cutbacks to the defense budget.

Peretz has much experience in this sphere. When he served as defense minister in former Prime Minister Ehud Olmert's government (2006-09), he received a reserve force that was neglected and unfit for duty — only about two months before the eruption of the Second Lebanon War. In an interview with Al-Monitor, Peretz warns about a similar blow to the reserves deployment and warns that this could be one mistake too many, in light of a stormy Middle East. Peretz also admits that he is frustrated by the diplomatic "standstill" characterizing the government of which he is a member.

Do you think that the decision to cut back the reserve deployment budget is serious? It sounds like another attempt of the chief of staff to scare the public in order to avert the overall cut to the defense budget.

"The decisions to go back and make the reserve deployment a target for budgetary cutbacks is likely to create a slippery slope that will ultimately increase the risk level faced by the State of Israel. The Middle East is not a place in which we can safely predict when any specific conflict will erupt, therefore the defense establishment has to take into account what happened in the past. I am speaking from experience. One of the things that came to light in the Lebanon War was the difficult condition of the reserves deployment."

Peretz adds and specifies, "There were [reserve] units that had not conducted exercises in years. Commanders who had not physically seen their soldiers for long periods of time. A drop in the competence and fitness of the reserve soldiers. We had to devote time to training exercises in the midst of the war. You have to understand that cutting training exercises, is the most convenient and accessible budgetary act. It does not create negative feedback, as in the case of closing a community centre for helpless victims who then go demonstrate in the streets.

"And in terms of the reserve soldiers themselves — it's good news."

Who are you trying to warn? Who is the address?

"The address is, of course, the Chief of Staff. The wars we were familiar with [in the past] of armored units and the air force have changed into rocket-missile wars. The time has come to re-examine the scope of the IDF [Israel Defense Forces] ground or naval forces. It is very questionable whether the recent submarine acquisition was really necessary ["Dolphin," considered the most expensive war weapon purchased by the defense ministry for the IDF — M.M.]. It doesn't end with buying a specific military system. You need forces that will operate it. That creates fixed expenses in problematic figures. When considering our future military approach, we must take into consideration that the battlefield has changed. This is not simple. It takes great fortitude to decide that you are cutting the ground force deployment. The IDF and the defense system are large systems in which you can get down to brass tacks and try to pinpoint the target of a cutback. But when it comes to the reserves, you have to save that at the end of the line [last for cutbacks]."

People are accusing the Chief of Staff of a 'spin [campaign].' Are you party to this criticism?

"Defense Minister Bogie [Moshe] Ya'alon and Chief of Staff Benny Gantz are both serious people. I hope that they are not waving the threat of cuts to the reserves department as a form of pressure, because that it not healthy for anyone."

Complaints are being heard about the early retirement contracts for career soldiers.

"I don't like this business of incriminating the army career people. When you examine the pensions, you understand that this is a very general statement. Also, you can't violate contracts that you have with people. You have to plunge into the obscure depths of the budget and find other places.

"For example, you can decrease the size and cost of the military delegations — true, that won't save you NIS 3 billion [$817 million] but it is another source. There is no need for these kinds of delegations in today's world. Military equipment acquisitions can be managed with technological and media tools."

Besides expressing your protests, what else can you do to change the budgetary decree?

"I have no intentions of preaching to the defense minister or chief of staff. I will find the opportunity to convey my message within the government."

Since you've mentioned the government … How did you feel when the government you are part of, authorized the cutback budget that so harshly affects the middle class and low-income populations? After all, you have waved the social-[protest] flag for many years.

"It is very difficult. I was the only minister in the government to vote against the budget bill. This is a budget that harms things that are very important to our society. One of the problems is that social services are viewed as a millstone that must be cut down to size, while I feel that they should be viewed as part of the country's growth engine. I presented several alternatives to raising VAT by 1% to everyone [from 17% to 18% — M.M.]. I proposed a differential VAT, or VAT gradations. There is no reason to pay the same VAT for children's clothing as for suits. But I have no intention of dealing with the question of who is to blame; instead, I try to convince. I admit that I find myself rather alone in this struggle but I feel that I have the important role of being the mouthpiece of the country's weaker elements and middle class in the government."

"I am very frustrated, but I am happy that Justice Minister Tzipi Livni is in the very thick of things as far as diplomacy is concerned. That is a cause for optimism. I also see how much effort Secretary of State John Kerry is investing. It is a difficult mission, but possible. Each time they warn us that we are close to the point of no return, but this time the feeling is that it's true. We are marching toward a bi-national state in a way that worries me, we are heading toward a reality of 'one state for two nations.' At the moment the situation is such that each side is trying to establish facts on the ground, in order to derail the diplomatic process. This is an irresponsible situation for which we will eventually have to pay a steep price."

"Mainly us. We are the strong agent in the field. And when we accelerate construction in Judea and Samaria at this time, it is very problematic."

Is the diplomatic process even possible in a government of such right-wing orientation? Isn't it doomed to failure?

"None of us thought that former Prime Minister Arik Sharon would do what he did in Gaza [i.e. the Gaza disengagement in 2005]. Prime Minister Netanyahu says that the time has come for an historic step, in order to resolve the conflict. Unfortunately, at the moment we are advancing only in the 'conflict cycle.' But I still believe that the combination of the openness evinced by the prime minister; the efforts invested by Tzipi Livni; and the determined involvement of the Americans, will lead to a formula that will bring us back to the negotiating table."

And the Labor party, the home that you left behind? Does it need to be part of the government that will advance the diplomatic process?

"Of course. I thought that they should have joined even earlier. I would be happy if political entities that hold world-views similar to mine, would also join the government."

It seems that the current structure of the coalition is already beginning to fall apart, such that in the very near future, there may be an opportunity for Labor to join …

"It is true that the components of this government are not really held together by a 'natural' glue. Now and again there is the sense that something has come undone. At the moment, it is only a small rent in the cloth, a few stitches."