A crowd rallies for Prime Minister Recep Tayyip Erdogan in a show of force against the protests, but not without a sense of apprehension even in one of his party’s main strongholds. 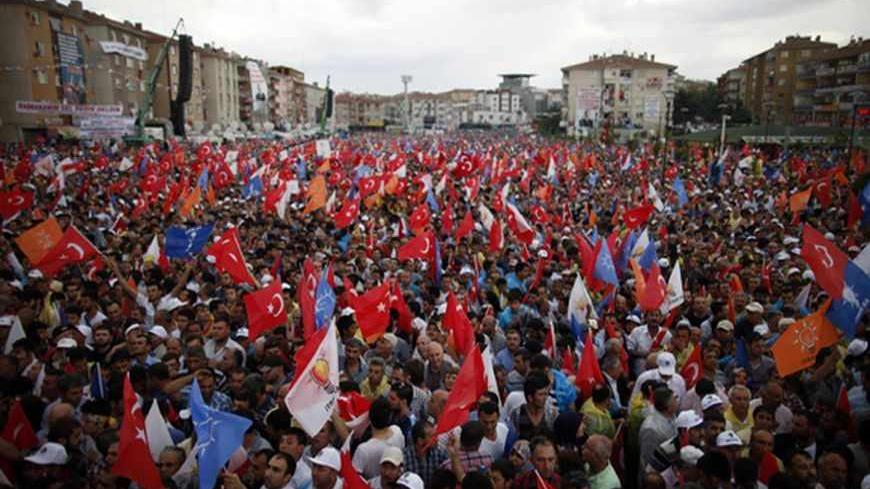 ANKARA, Turkey - A crowd of some 100,000 supporters rallied in support of Turkish Prime Minister Recep Tayyip Erdogan in one of his main strongholds near Ankara [June 15] in a show of force amid unprecedented street protests opposing his rule. Outside the venue, however, many watched with apprehension and some even pledged to never vote for him again.

Greeted as “the master of masters” and “a world leader,” Erdogan issued a final warning to protesters occupying Gezi Park in Istanbul to evacuate the place. Only hours later, police launched a violent clampdown on the encampment.

At the rally in Sincan — where 64% voted for Erdogan’s Justice and Development Party (AKP) in 2011 — there was little sympathy for the protest movement, triggered by Erdogan’s overbearing style and controversial policies such as an aggressive urban construction drive, restrictions on alcohol and tight control of the media.

“There is nothing rightful in their cause. If they don’t want to die they should not go to street protests. They should rather go to the ballot box when the time comes,” 52-year-old worker Salim Basal said when asked about the four dead and hundreds of injured since May 31. A shopkeeper who declined to be named added, “The police has been softer than they should be. Erdogan is tough but that’s how a leader should be.”

Erdogan described the protests as a “dastardly ploy” to overthrow the AKP and hamper Turkey’s economic success, plotted by a “treacherous network” of local and foreign forces, and promised to document the collusion. He likened the protests to past military interventions and claimed that last month’s deadly bombings in Reyhanli, at the Syrian border, were part of the same plot. Amid booing from the crowd, he portrayed the protesters as disrespectful to Islam, going as far as to suggest that “immoral” things were going on “inside and outside the tents” at Gezi Park.

Erdogan stood behind the heavy-handed police response to the protests as the crowd chanted, “Let the hands that touch the police be broken.”

Supporters praised Erdogan in adoring terms and unquestioningly embraced his arguments over the street revolts. “I’m with the prime minister until death. If it weren’t for Allah I would have worshipped him,” 21-year-old Ali said. Clad in a black chador and holding a baby in her lap, a young woman who withheld her name blamed “primarily Israel and the United States” as the main conspirators. She then retracted the United States when asked about Erdogan’s recent warm talks with US President Barack Obama.

Erdogan said the rally was marking the beginning of his party’s election campaign for municipal polls next March and urged his supporters to respond to the plot at the ballot boxes.

There was tight security in place for the rally, with hundreds of police officers on duty, snipers positioned on rooftops and helicopters flying over the venue.

Outside the crowd, many watched the euphoria pensively as Erdogan’s polarizing rhetoric seemed to have caused concern for AKP sympathizers and opponents alike.

Erdogan has dismissed the protesters as “hoodlums” and targeted them in daily outbursts, including a memorable warning that he was “hardly restraining 50% [of the nation] at home” — a reference to the vote he got in the last elections.

“The AKP did many good things. We no longer wait for days in queues to get medicines and treatment. They go door to door, helping the poor,” driver Maksut Tamimler, 47, said in a modest restaurant as Ataturk watched sternly from a portrait on the wall. “But Erdogan must correct his language. Why is he provoking the people against each other? Take me, for example, I go both to the mosque and the beer house.”

Sitting in a street leading to the rally, a 68-year-old retiree said he voted for the AKP in all three elections since 2002 “but never again.” He was unhappy about tax hikes that forced him to shut a transport business and was now outraged with Erdogan’s tough talk. “Who is he to threaten the people? I hope we do not become like Syria. Shame on him!” he grumbled.

A woman selling lottery tickets chimed in: “He [Erdogan] is so divisive, a lying machine. How can he call Ataturk a drunkard?” She also slammed the peace process with the PKK [Kurdistan Workers Party] and AKP nepotism. “Why is the police not gassing the celebrations of PKK people? Why do only those wearing headscarves get the jobs?”

Even though the AKP has preserved a united appearance, the scathing message of several lawmakers — a rarity in a party known for iron discipline — suggest that discontent may be brewing at least in the AKP’s less conservative wing.

In a series of Twitter messages, Ertugrul Gunay, the culture minister until January 2013, has sided with the protesters’ environmental concerns and decried the police crackdown. “Oh, God! Keep us sane. What is this row about?” he wrote. His criticism prompted a fellow AKP member to caution that he’d better “discuss those issues at the party,” to which Gunay gave a sarcastic response.

Another AKP lawmaker, Erdal Kalkan, has tweeted that “no one should think he is a sultan.” A third one, Ibrahim Yigit, has denounced Erdogan’s warnings to the protesters. “Are you going to start a civil war or what? Are the people going to kill each other?” he said in remarks to an Internet news site.

Two senior AKP members — former lawmakers from southern Turkey — watched Erdogan in the crowd at the rally in Sincan. They argued that support for the party remained unshaken but conceded they were receiving “recommendations” from party grassroots that Erdogan should be more conciliatory.

The crowd at the rally numbered about 120,000 people, according to police on duty at the scene. Many arrived from neighboring provinces, ferried on buses rented by the AKP.

There have been claims that not all in the crowd who greeted Erdogan in Ankara when he returned from a North Africa tour on June 9 were willing participants. Municipality workers were reportedly asked to attend en masse and at least some were warned they would otherwise be fired. A cab driver said taxi stands in Ankara were asked to contribute vehicles for the convoys.