Erdogan Confronts Himself Over Protests

Turkish Prime Minister Recep Tayyip Erdogan is more challenged by policies of his own making than his political opposition. 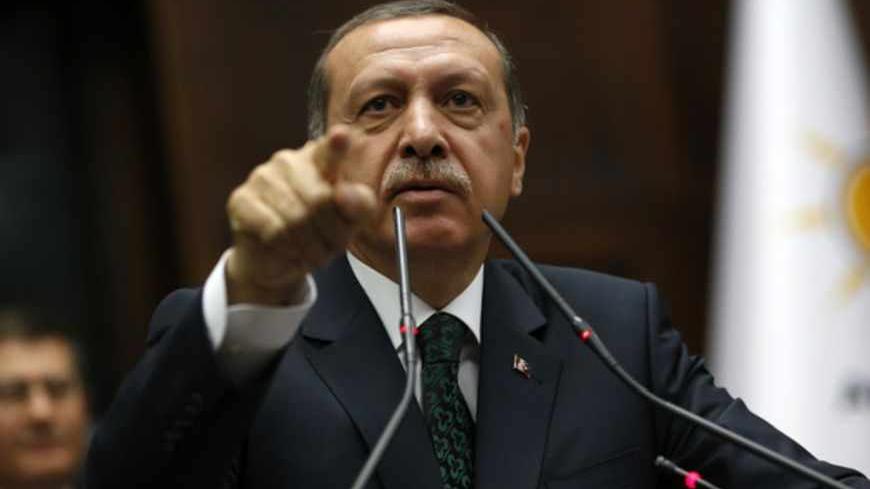 Turkey's Prime Minister Recep Tayyip Erdogan addresses members of parliament from his ruling Justice and Development Party during a meeting at the Turkish parliament in Ankara, June 25, 2013. - REUTERS/Umit Bektas

Everyone is curious about Prime Minister Recep Tayyip Erdogan. This is what I felt in my recent visit to European cities, where I was frequently asked for my analysis. What I noted inside and outside Turkey was a mix of curiosity and concern.

What does Erdogan want to do? As a popular leader of a stable party that 11 years ago brought a new political class to parliament and broke the grip of military tutelage, significantly weakened anti-democratic mind-sets and kept the vision of reform alive all this time, is he transitioning from national renewal to dictatorial rule and pomposity? Or is he, engulfed by fear, heading toward an obscure future?

According to many, Erdogan was the worst affected politician in Turkey by the wave of urban protests that emanated from Gezi Park. This view suggests that by adopting the same disproportionally tough attitude in politics as the one he took in the streets and relying on the “will of the nation” (Erdogan’s term for his rallies), the prime minister might not mean much in the long run. Erdogan saw the sudden collapse of efforts to shape an untouchable personality cult around him. Although he has been trying to downplay this collapse with claims of rally attendance in the millions, his anger gives him away. His persistence in sticking to the same language and behavior despite many friendly warnings serves no other purpose than feeding the uncertainties of the country’s future. He most recently denigrated the Taksim Platform, which rose to prominence as an organizer of the street protests, as "nobodies" who did nothing to cool tempers, but worked to the contrary.

One of the answers to the questions lies in political history. The leaders who dominate a country’s governance and their own parties usually face two options: either evolve into respected statesmen and groom successors — thus maintaining political stability — or fail as politicians.

This is why it is important to pay attention to the similarities between Erdogan and former British Prime Minister Margaret Thatcher after his latest performance. This is not only the fatigue of 10 years of rule, but also ease of ruling given the abysmal shape of the opposition that remains on the periphery.

Although he is exerting much effort to show himself still as powerful, Erdogan insists on inserting himself onto the increasingly urgent reform calendar that he has to deal with. That is how he is testing patience and the social fabric. The statement by Selahattin Demirtas, the co-chair of the pro-Kurdish Peace and Democracy Party, about the Kurdish peace process, that read, “We passed through some very disturbing 10 to 15 days. It could have collapsed,” is a direct reference to Erdogan’s style of governance.

More important than the anxiety felt by Turkey’s allies are the doubts spreading within the Justice and Development Party (AKP). AKP leaders have been so far successful in concealing the inexorably growing restlessness within the party. But it is known that some grievances within the party have been conveyed to the prime minister with unusual bluntness by some key ministers who are painfully aware of Erdogan’s “one man who decides everything” tendencies and the high risks involved in some decisions he has been making.

The stress in the AKP's upper echelons, already under a heavy burden, has increased under Erdogan’s overbearing style. This situation will continue to generate negative energy within the parity until the March 2014 local elections, which will in a way be a referendum for Istanbul.

What is clear is this: There is a serious synchronization problem between Erdogan's personal political projects and current political uncertainties and expectations from the AKP's massive bloc of voters who expect a new constitution, democratic rights and freedoms, and the establishment of a new system of checks and balances.

As Semih Idiz so aptly emphasized in his last analysis for Al-Monitor, Turkey is a massive social laboratory under AKP rule. Experiments here require utmost skill and care. Issues are not about to be forgotten, and those raising them will not lower their voices.

For the past three years, Erdogan has been displaying a leadership of contradictions and inadequate and delayed solutions with bombastic rhetoric and a domineering mind-set instead of a strategic approach to major challenges such as the Kurds, the Alevis, the secularists, the reopening of Halki Seminary, Syria, Cyprus, Israel and Armenia.

The events at Taksim Square have let out new curses from Pandora’s box. Cities will be different from now on. In a period when social pressures are mounting, it is certain that the Kurdish peace process that has reached the phase of reform will push Erdogan into an even more cramped corner. But the skills and flexibility this politician has toned over the years should not be underestimated.

It is true that Erdogan has shaken the confidence placed in him. But those who think that he still may have a few more tricks up his sleeve point to a snag in the peace process. According to pessimists, this summer, too, will pass without much getting done, and all will be stalled until the March 2014 local elections because Erdogan doesn’t want to risk losing any ground. What is certain is that Erdogan’s tasks are much more difficult now, because he has dug this hole himself.