As the expected June 30 protests approached, Egyptians were expressing a mix of hope, fear — even resignation — that the nation's military would have to intervene in government. 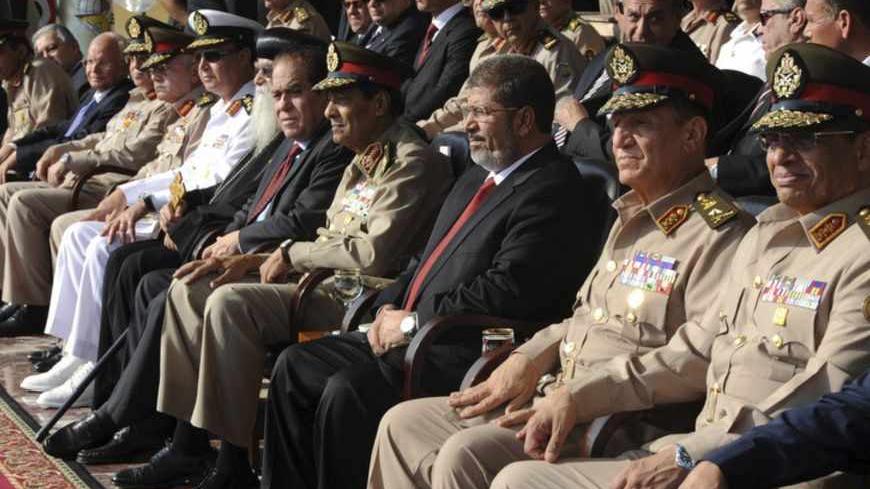 Following the violence around the anniversary of the Jan. 25 revolution, and President Mohammed Morsi’s apparent inability to deliver on its aspirations in his year of rule, there has been a mix of hopeful, resigned, and wary speculation about the possibility of a new intervention by the military into government.

Minister of Defense Gen. Abdul Fatah Khalil al-Sisi deflected such conjecture by repeatedly calling on the country’s political factions to come to accords and find mutually agreeable solutions to problems facing the country. He has simultaneous warned the ruling regime against their inaction and reassured the citizenry that the military will not allow for the collapse of Egypt.

Still, a Zogby poll conducted between April 4-May 12 showed that 44% of Egyptians surveyed support temporary military rule, while only 26% believe the Muslim Brotherhood is capable of governing the state. Many anticipate a scenario where conflict between the anti-government and pro-government protesters will escalate to the point where the military is forced to step-in. Whether the military is a desirable option or not is a different debate, but many Egyptians view the military as the only institution capable of leading the country through its current crises. According to the Zogby poll, 92% have confidence in the military — the only institution to receive the support of more than two-thirds of those surveyed.

In less than a year since the end of SCAF rule, short memories and heightened desperation cause people to overlook the military’s numerous violations against the citizenry — brutal crackdowns on protesters, activists arrests, virginity tests, the blue bra incidents, and the mishandling of the economy — as strikes against their current capability to govern. Political commentators on Twitter have said, “Morsi will be remembered as the man who ended military rule in 2012 and brought back the military in 2013.”

By no means is the scenario of military involvement inevitable, and it unclear exactly what form it will take — a direct military rule like the Supreme Council of Armed Forces which ruled after the ousting of Mubarak, or the military taking control to appoint a temporary civilian-led transition government, or another form. However, Egyptians increasingly fatalistic view of military involvement as impending reflects the population’s despondency and the massive failure of the country’s political figures.

Tamarod, an anti-Morsi movement behind June 30's protests, is also ambiguous in clearly defining its long-term goals, instead focusing on its most-pressing goal of Morsi’s removal and early presidential elections supervised by the head of the Supreme Constitutional Court.

While the immediate appeal of their demand has likely helped garner more support as the majority of Egyptians are simply fed up with the current regime, it also shows the repeated short-sightedness of activists in playing politics with a long-term vision and strategy.  While Tamarod may claim not to care who wins in a future election due to an abstract respect for process and the will of the people, the reality is that its leaders do care if they are seeking to change the status quo via early elections. Hence, they need to be prepared to do the legwork to achieve the post-June 30 scenario they desire.

One potential tactic for an effective alliance between Tamarod and the major political opposition of the National Salvation Front, both intent on the removal of the current regime, would be the activist-driven campaign of Tamarod mobilizing the streets with participation from the NSF, and the NSF stepping up to take charge on mutually agreed-upon goals in the political arena after June 30. However, scattered, directionless, and also viewed as inept by most Egyptians, the NSF joined the Tamarod bandwagon once it was clearly taking off, and NSF leaders have been accused of being political opportunists in their support for the movement.

Further underlying the crisis is the failure of both sides to acknowledge the valid claims of electoral legitimacy by the Islamists and the government’s failures by the opposition. The Islamists defend the current regime stating that their electoral victory grants them political legitimacy as custodians of the state. However, Tamarod is also right to launch protests against the current regime over legitimate grievances. While Tamarod may not have legal standing, a petition that is capable of collecting 15 million signatures demanding the stepping down of the president is at minimum a powerful indication to any sentient leader that the government needs to change directions to better fulfill the demands of the people: bread, freedom, and social justice.

Regardless of what the immediate post-June 30 scenarios are — even in the possibility that the protests fail to gain significant momentum — the near or distant reality is that elections will happen — parliamentary, presidential, or both. As long as the opposition fails to play the electoral game well and gain political ground to shape the political process, it will continue to fail to have the opportunities to shape the Egypt that it, and many Egyptians, believe in. Otherwise, it will continue to be in the narrow interest of the Islamists to continue to marginalize the opposition from the political process. The opposition is relevant in so far as it is an actual political threat to the Islamists for which the people will vote and take to the streets.

Even as the Brotherhood continues to lose ground, the opposition fails to capitalize on this by not building a strong network to gain popular support. According to the Zogby poll, 40% of the population, while of the same political mind as the opposition, has no confidence in either the government or the opposition parties. The opposition has done little to earn the favor of this “disaffected plurality” as Zogby calls them. The opposition is viewed as too detached from the mainstream and ineffective in pushing its agenda.

The Tamarod campaign, especially, has given the opposition potentially unique access to much of the basic information to run successful campaigns. Through each petition form it has collected the name, national ID, government, district, and email address of signatories as well as built-up a network of volunteer campaigners.

By campaigning throughout the country, it has developed knowledge of area-specific strategies that are effective and local knowledge. Tamarod and the opposition parties should work together to organize and utilize this information to build an effective campaign strategy. Prior to the last parliamentary elections, the opposition complained of insufficient time to prepare, but this time, with the indefinite delay of elections and the demonstrated popularity and organizational strength of the Tamarod campaign, those who seek change in the government have the opportunity for true democratic mobilization of the people.

Now, they need to show the political sophistication and far-sightedness to look at how to successfully achieve their goals in the post-June 30 political reality.