Only Politics Can Save Egypt's Economy

Solving Egypt’s economic woes is a non-starter until there is political stability. 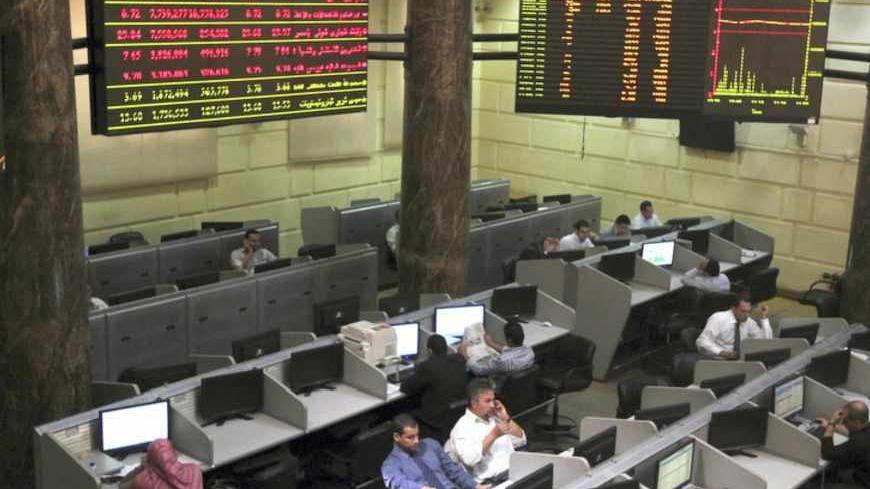 Over the past few days, the Egyptian stock market index has been plunging, most vociferously this Wednesday alone by more than 5.17%, reaching its lowest level in a year, with another 0.91% decline in the beginning of trading today. The assumed causes for the plunge more immediately include the announcement that Egypt might be taken off the MSCI emerging markets index (Greece has just been downgraded to an “emerging market” status, becoming the first developed country to experience that). More generally, there are also the concerns over the potential outcome from the upcoming, and expectedly large scale, June 30th protests calling for early presidential elections. Many fear the country might fall into a whirlpool of deep(er) instability, depending on what ends up taking place on that day.

This announcement, to be sure, seems to not be breaking any patterns. In fact, Ahram Online has counted 16 downgrades by major international credit agencies between January of 2011 and May of 2013. As highlights: At the moment, Egypt has been downgraded by Standard & Poor's to a rating of C, government bonds have been downgraded successively by Moody’s Investors Service from B2 to Caa1, and Fitch Ratings has also downgraded Egypt’s sovereign rating from B+ to B.

Egypt’s foreign currency reserves, which stood at $36 billion around the time of the revolution, have recently climbed back from a record low of $13.4 billion in March to $16.04 billion this month. However, this reserve increase mostly comes from loans and deposits from Qatar and Libya in Egypt’s central bank, and not as the result of any genuine rebounding of the economy, leading to substantial increases in foreign debt. The extreme uncertainty surrounding the exchange rate of the Egyptian pound and what is seen as an almost inevitable significant devaluation, in addition the recent intermittent unavailability of the US dollar and the burgeoning black market as well as the recent currency controls, all aren’t exactly news anymore.

Even further, in April the International Monetary Fund cut Egypt’s economic growth forecasts from 3% to 2% for the year (whereas Egypt had been averaging 4-5% growth rates for years before the revolution), set unemployment expectations at 13.5% and expected consumer prices to increase in 2014 by 13.7%. The deficit has risen in the first 10 months of the current fiscal year from around $16.8 billion during a similar time frame last year to around $26.4 billion. And on a somewhat unrelated note, and as yet another example, you also have Egypt’s rising food prices as well as the increasing, daily, multiple power outages and fuel shortages, which have eased lately due to a blend of crisis management and a Qatari influx of gas.

The indicators go on.

Then, there is the mythological and particularly Sisyphean quest for the IMF loan. The signing of the standby agreement, which has been on the table since early after the revolution (though the military had preferred to leave the controversy surrounding it to the a civilian government) and had increased in size from $3.2 billion to $4.8 billion, continues to elude the Egyptian government. Rather, the government has developed the unique Olympic sport of continuously announcing it is close to sealing the deal, while the IMF remains largely on the fence, often publicly so. The financial amount of the standby agreement itself might not be large enough to deal with Egypt’s problems, but the reason why it remains such a sought after target is because it theoretically provides a stamp that the Egypt economy is worth the risk, which would theoretically drive up foreign direct investment again. Alternatively, the IMF has recently signed its deal with Tunisia, leaving Egypt looking more troubled than before.

Of course, there are several reasons for Egypt’s economic woes and conundrums, as well as the inability to sign the agreement with the IMF. For example, there is the strong popular resistance to any austerity measures or deep subsidy reforms of the kind the IMF has been seeking, regardless of whether or not I think that is actually the right way to go, which makes the Fund uncertain of whether or not the government could carry out any promises it gives. There is also the government’s seeming lack of economic vision beyond basic liberalization.

But the simple and more pertinent fact is that at the heart of all of Egypt’s economic troubles is the country’s mounting political instability, and the ensuing security concerns and future uncertainty.

The same sentiment is being echoed by rating agencies, investors and even sources close to the IMF, who claim the fund’s other main concern is that there can logically be little economic recovery without basic political stability and consensus, especially in a country that strongly depends on tourism and foreign direct investment.

What is remarkable, on the other hand, is that it does not seem that the Muslim Brotherhood and President Morsi either sufficiently recognize this or care enough. Rather, it appears that they are entertaining the hypothesis that you can separate the economic from the political, whether intentionally or out of political stubborness. And while much can be argued regarding the opposition’s own stubborness and intransigence, the other fact is that the president and the Brotherhood have largely pursued an opposite path to what should be pursued by a leadership seeking reconciliation and compromise, as I outlined in a recent post.  Rather, the path pursued has been one of increasing political unilateralism and confrontation, with brief interludes and facades of reconciliatory rhetoric.

The only way Egypt’s economy can rebound is if the political environment in Egypt achieves a modicum of basic stability. For that to happen, there will have to be real and deep national reconciliation and agreement over the foundations of the (supposedly still) nascent Egyptian democracy, especially over the still divisive new constitution. It is genuinely as simple as that. What’s not so simple, however, are both the growing complications of the political conflict itself  and — more so — that fewer and fewer people are willing to listen on either side, and all eyes instead are looking toward June 30th with anticipation.

Regardless of what happens or what I personally feel about the anticipated events, the way things seem at the moment makes the case that a political breakthrough of the kind needed for the Egyptian economy to more quickly and sustainably bounce back is not on the verge of happening anytime soon.

Bassem Sabry is a writer and Egyptian blogger who covers the region on An Arab Citizen. On Twitter: @Bassem_Sabry. Email: bassemwrites@gmail.com.