US, Iran and Rumors of Conspiracy

The US and Iran may be facing a common enemy. 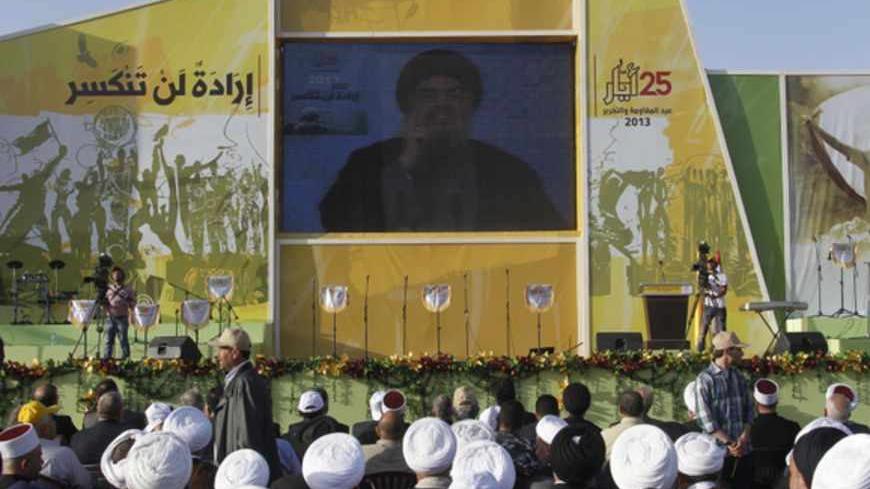 People watch Lebanon's Hezbollah leader, Sayyed Hassan Nasrallah, as he appears on a screen during a live broadcast to speak to his supporters at an event marking Resistance and Liberation Day, in the Bekaa Valley, May 25, 2013. - REUTERS/Sharif Karim

The people of the Middle East cannot stop imagining or inventing "conspiracy theories." They also often disagree on whether to believe or question them. But whatever the background or assumptions surrounding [conspiracy theories], each contains many elements of truth, even if they involve an alliance between Washington and Tehran!

Today, many in Beirut question the concurrence of a series of events. What could have possibly led to such a concurrence:

First, a British soldier was stabbed in a suburb of London on May 22. Investigations showed that the two suspects in the crime are Michael Adebolajo and Michael Adebowale, who are Sunni Muslims. It was later revealed that Adebolajo was among those who attended the speeches of Sunni Islamic preacher Omar Bakri Fustuq, when the latter lived in London. Fustuq moved to Lebanon years ago, and has become one of the most prominent Sunni Islamists supporting the revolution against Syrian President Bashar al-Assad, and against the Shiite Hezbollah party.

Second, only four days after the incident in London, a French soldier was stabbed in a suburb of Paris. The suspect is also a Sunni Islamist.

Third, the most peaceful and stable European country, Sweden, witnessed a whole week of insecurity because of a series of attacks carried out by Sunni Muslim immigrants living in the suburbs of Stockholm.

Are these isolated incidents? Are they merely “individual security incidents” that could happen simultaneously anywhere, carried out by individuals affiliated with one group or different groups? This could be true. The conspiracy theorists in Beirut do not only list security incidents, however, but provide an analysis based on political developments. They find it surprising and ironic that these simultaneous events happened within the framework of a series of other developments that have clear political dimensions:

First, there are the Boston bombings on April 15, whose political consequences cannot be overlooked. The US authorities announced that the two suspects are Sunni Islamists, specifically from Chechnya. What’s more, the United States announced that the Russian intelligence services had been cooperating with the United States to protect the latter from such terrorist attacks. Another coincidence in relation to this particular one is the disclosure that one of the Islamist brothers was a fan of a Lebanese Sunni Islamist preacher who is linked to Fustuq.

Second, Hezbollah Secretary-General Hassan Nasrallah stressed in a televised speech on May 25 that he is fighting a war in Lebanon and Syria against those whom he called "takfiris," in reference to the Sunni jihadist group Jabhat al-Nusra, which is affiliated with al-Qaeda.

Third, Assad repeated the same position in a series of press and TV interviews. He was the one who started this trend over a year ago, stressing that the war in his country is against the "terrorists."

Fourth, the Turkish media announced on May 30 that the Turkish intelligence services arrested in the Adana region of southeast Turkey 12 supporters of Jabhat al-Nusra in possession of two kilograms of sarin gas.

What do these two series of events imply? The conspiracy theorists in Beirut say that it has become clear that the purpose behind these "coincidences," and their implicit synchronization, is to create a "common enemy" of Washington, on the one hand, and the axis extending from Moscow and Tehran to Damascus and Beirut, on the other.

This one enemy of the two sides is without a doubt a dangerous, violent and fierce enemy that only knows the language of killing.

How would Washington act when its "enemy" in Boston, the city of US Secretary of State John Kerry, turns out to be the "enemy" of Russian President Vladimir Putin in Dagestan and the suburbs of Grozny, as well as the "enemy" of Assad in Aleppo and Hama, and the "enemy" of Nasrallah in Qusair?

What would Europe say when the side that stabs a British soldier in London and a French soldier in Paris, kidnaps Europeans in Africa and fights the French in Mali, is the same side fighting the Syrian regime in Damascus and threatening to kill the Shiites in Beirut?

A "common enemy." It is a theory that British Prime Minister David Cameron tried to downplay. He backed down after being bombarded with criticism.

Furthermore, the conspiracy theorists in Beirut talk about back-channel communications between Washington and Tehran, through the Lebanese capital Beirut, and specifically through Lebanese persons long known for providing "services" of this kind. These "rumors" surfaced two weeks before the Iranian presidential elections, which many believe will be an occasion to restart the nuclear negotiations.

The Geneva II conference is also said to be moving toward a Syrian settlement with Russian fingerprints. Meanwhile, the US authorities are preoccupied with the latest news about the death of a US citizen who was carrying out "jihad" in Syria.

The aforementioned could be a theory, plot or an accumulation of many "coincidences."