Will Turkey Respond To Reyhanli Bombs?

Turkey is not likely to take unilateral action against Syria, Amberin Zaman argues. 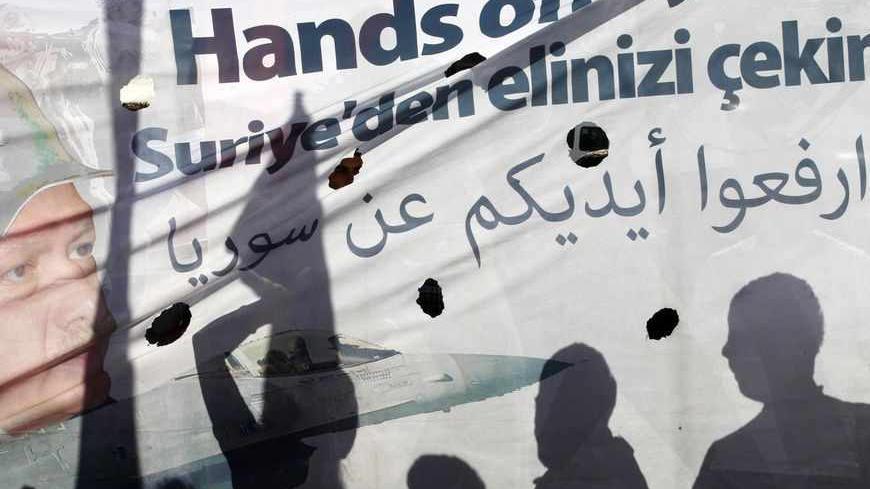 Shadows of protesters are cast on a banner as they march during a demonstration against the Turkish government's foreign policy on Syria, in central Hatay, May 12, 2013. - REUTERS/Umit Bektas

Mangled corpses, anguished cries and plumes of black smoke. The scenes could have easily been from war torn Syria. But they were unfolding in the Turkish town of Reyhanli on the Syrian border after twin car bombs went off in the town center ripping into crowded streets and killing at least 46 people in the early afternoon of May 11. The attack in Reyhanli — home to thousands of Syrian refugees and a gathering point for rebels fighting to topple President Bashar al-Assad — has sharpened fears that the two-year conflict in Syria has moved to Turkey.

As the death toll climbed, Turkish leaders were quick to blame Assad. Interior Minister Muammer Guler said the perpetrators had been identified as locals who were linked to an organization with ties to the Syrian regime and secret service.

(The organization Guler was referring to was most likely the DHKP-C, a left-wing terrorist faction that claimed responsibility for the Feb. 1 suicide bomb attack on the US embassy in Ankara.)  Deputy Prime Minister Besir Atalay, meanwhile, firmly dismissed speculation that Syrian rebels seeking to provoke Turkey into military action against Syria were responsible. “It is definite that the tragic incident has no connection with Syrian refugees or the opposition," Atalay said.

The big question is if and how Turkey will respond. The other is whether it can leverage the incident to persuade Washington to intervene. There is little indication that Ankara will go it alone. On the contrary, Turkey is presenting Sunday’s attack as a provocation and says it will not fall into this trap.  Speaking to the state run TRT news channel on Sunday, Foreign Minister Ahmet Davutoglu declared that Turkey reserved the right to take “every kind of measure.”

Yet, Turkey saw no need for an emergency meeting with NATO, he added. In other words it would not seek the alliance’s support for military action, which diplomats say, would not be offered in any case.

“The fact of the matter,” as one Western diplomat put it, is that “Turkey is in a bind.”

After protracted efforts to get Assad to share power with the opposition (principally the Muslim Brotherhood) in August 2011 Turkey pulled the plug on the regime. It has since been at the forefront of efforts to topple Assad. Yet, Turkey’s calculation that Assad would fall swiftly and that the Americans would lead the charge have proven wrong. There is little support for the government’s Syrian policy even among its pious base. The widespread perception is that Turkey was duped into taking on Assad at America’s behest. The real target is Iran, their argument runs. Not surprisingly, tensions are brewing between Turks and the ever-swelling population of Syrian refugees. Within minutes of the explosion, there were reports that locals had attacked Syrians.

Analysts warn that Saturday’s suicide bomb attack may be repeated. While most Turks feel sympathy for the plight of Syrian civilians, there is zero appetite for military intervention.

For all its threats to take “necessary action,” Turkey’s response to previous Syrian provocations has been markedly muted. Aaron Stein, an Istanbul based defense expert speculated over Twitter that Turkey’s most likely reaction to Sunday’s blast will be again to “pivot towards ‘Turkey has been abandoned’ rhetoric and limit [its] response,” But as Steven A. Cook of the Washington-based Council on Foreign Relations noted “if that is the likely response, it will reconfirm the weakness of Erdogan’s Turkey.”

The biggest poke in the eye came when Syria shot down a Turkish warplane in June 2012 over the Mediterranean Sea, saying it had violated its airspace.

Then, too, Turkey spoke of “decisive action” and called an emergency session of NATO under the alliance's Article 4, which is essentially a first step to any action under Article 5, which says that “an armed attack against one” ally “shall be considered an attack against them all.” But NATO made clear that it had no desire to intervene, and Turkey was forced to back down.

Syrian artillery shells have since been straying into Turkey killing five people in the border town of Akcakale last September. Turkey responded with artillery fire and in November formally asked NATO to deploy Patriot missile batteries to protect it against a potential missile attack from Syria. Its request was granted and Turkey sought to spin the decision as a first step toward the establishment of a no-fly zone over northern Syria

In all likelihood, Erdogan will use the Reyhanli incident to put pressure Obama for a no-fly zone. Western diplomats in Ankara speculate that Obama will not be be swayed as Washington and Moscow seek to bring the opposition and the regime to the negotiating table. While most observers express skepticism about the outcome of the initiative, Obama is expected to ask Erdogan to support it.

This might entail staunching the flow of weapons to opposition rebels. A Syrian rebel source told Al-Monitor that this is already happening. “Its been drying up since the beginning of the year” he said. The sealing of the Akcakale border in the wake of the February car bombing has “made things worse” the source added. Obama is also expected to convey worries over alleged Turkish tolerance for members of the Al-Qaeda linked al Nusra Front. The group is labeled as a terrorist group by Washington and France is preparing to follow suit. Turkey is said to be reluctant to do so because al Nusra has proved more effective than any other force is combating regime forces.  “And regime change in Syria” said a senior Turkish official “has become a matter of honor.”

“Imagine that he fails and that Assad stays on,” added the official. “That would be the biggest humiliation of all.”

Amberin Zaman is an Istanbul based writer who has covered Turkey for The Washington Post, Los Angeles Times, The Daily Telegraph and The Voice of America. A frequent commentator on Turkish TV channels she is currently the Turkey correspondent of The Economist, a position she has retained since 1999. She is a regular contributor to the German Marshall Fund of the United States' "On Turkey" series. She has also written columns for major Turkish newspapers. Her areas of  specialisation  include Turkish foreign policy, the Kurds, and Turkish Armenian reconciliation. On Twitter: @amberinzaman