Turkey Puzzled by US Stance On Exxon-KRG Oil Deal

Ankara questions US concerns over its arrangement with ExxonMobil for energy exploration in the Kurdistan Region of Iraq. 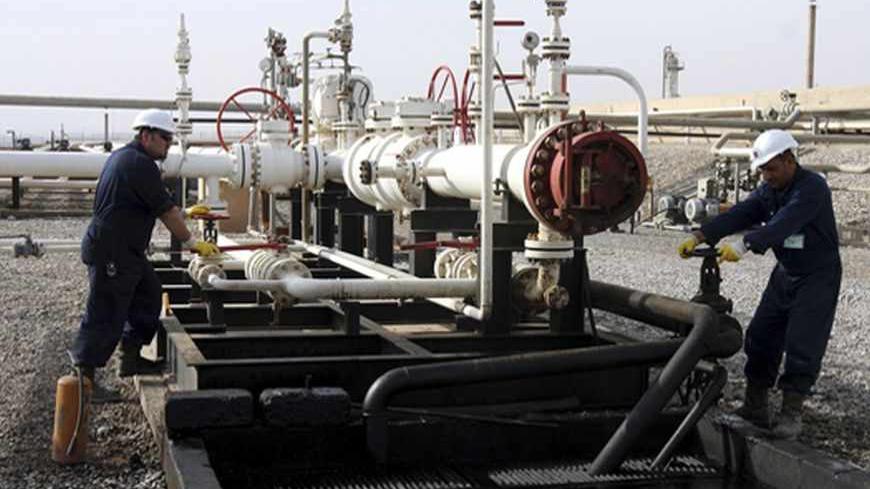 Workers adjust a valve of an oil pipe in Tawke oil field near Dahuk, 400 km (249 miles) north of Baghdad, Nov. 24, 2010. In this part of Iraq, the hillsides sweat oil. Without any coaxing, the sticky black treasure oozes from the layered rock and gathers in pools that bubble as dissolved gases surface. - REUTERS/Azad Lashkari

Turkish officials are dismayed hearing about US concerns that Turkey’s decision to sign an agreement with ExxonMobil in northern Iraq is perceived as a threat to Iraq’s unity. Noting that it is ExxonMobil, a US company, that is going to do the exploration work in the Iraqi Kurdistan Regional Government's (KRG) area, the Turkish side is curious why the Obama administration would want Turkey — a country that is more than 80% dependent for its energy needs on outside sources — to turn its back on newly rising opportunities in its neighborhood that will help it to diversify its energy portfolio, while giant US oil and gas companies are exempt from such criticism.

According to the Turkish side, it is primarily these giant oil companies that decide how and when these hydrocarbon reserves will come on the market, and that when they make their move it is best to be on board from the beginning. As ExxonMobil took a step in that direction by exploiting the northern Iraqi resources, Turks are saying that it is not even serious to paint Turkey as a country attacking Iraq’s territorial integrity. “We have a fast developing economy and industry. We have a large population and we don’t have our own homegrown energy resources to match our needs to keep up with the growth,” a Turkish official told Al-Monitor. “ So what it is exactly that the United States wants us to do — that we don’t work with Russia, Iran and Iraq! So, who should we buy our energy from?”

The Wall Street Journal, however, reported on May 14, “US officials fear setting a precedent to let regional governments strike independent resource deals could destabilize [Iraqi Prime Minister Nouri al-] Maliki’s government during a time when sectarian violence in Iraq is mounting.” The Wall Street Journal also went on to write: "'Our position on energy trade from Iraq has been consistent and remains unchanged: The United States doesn’t support oil exports from any part of Iraq without the appropriate approval of the federal Iraqi government,' said Caitlin Hayden, a spokeswoman for the National Security Council."

Turkish officials, however, argue that if the Obama administration is worried about rising sectarian conflict in Iraq, they should point fingers at themselves and take responsibility as the former occupier of the country — but not blame Turkey for anything that goes wrong in Iraq. “The problem is in Baghdad, not in Ankara,” one Turkish official told Al-Monitor.

The signing of the agreements does not mean that these resources will be available for consumption on the market tomorrow. It is going to take time, and much can change in Baghdad’s relations with the Iraqi Kurds before then. “We are just watching out for our best interest.”