Ahmet Turk, a pro-Kurdish Peace and Democracy Party member, draws attention to a new legislation bringing municipalities under direct tutelage of governors, and argues that is in direct contradiction to the government’s Kurdish initiative. 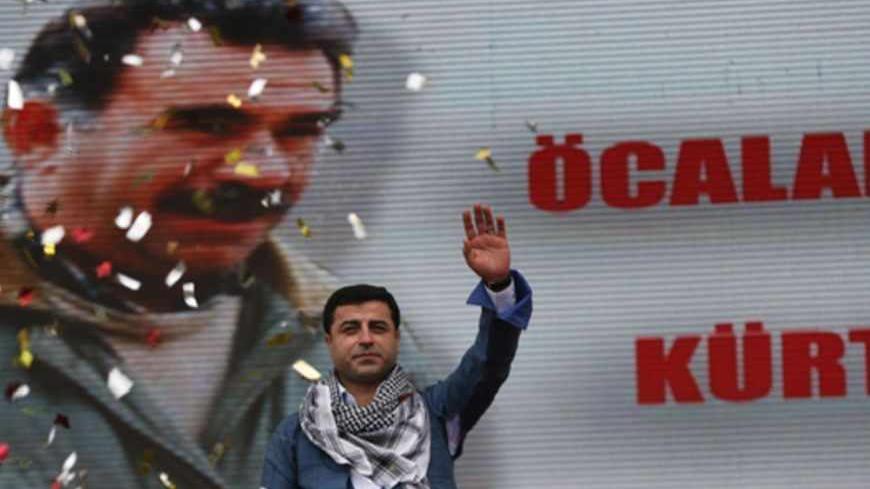 Selahattin Demirtas, co-chairman of the pro-Kurdish Peace and Democracy Party (BDP), greets his supporters during a rally to celebrate the spring festival of Newroz in Istanbul, March 17, 2013. A picture of imprisoned PKK leader Abdullah Ocalan is seen in the background. - REUTERS/Murad Sezer

“I have been to Washington numerous times before, but this time feels different,” Ahmet Turk, a pro-Kurdish Peace and Democracy Party (BDP) member said on May 22 in Washington at a small gathering of the Carnegie Endowment for International Peace. “I get a sense in this visit that Kurds are for the first time really recognized as an actor in Middle East politics. [US officials] wanted to learn about our opinions on this and that issue, which suggested Kurds are now regarded as a factor in discussions concerning Turkey and the Middle East.”

The BDP delegation’s visit to the capital of the United States came only a week after Turkish Prime Minister Recep Tayyip Erdogan’s visit to the White House. There is evidently great interest inside the Washington beltway to learn more about the Erdogan government’s initiative to resolve the Kurdish issue. The White House, State Department and Congress were on a long list of Turk's meetings. “I believe that for the first time we’re engaged in a hopeful process,” he said. “But things have to show some progress for people to continue feeling hopeful. If and when that feeling is tarnished, people will also respond accordingly.”

As Turk talked about being hopeful for the first time, he also raised concern on two key issues — that the Turkish government does not really correctly comprehend the regional developments, and that it is implementing new laws that are in direct conflict with this process.

“The developments in the Middle East, the fighting in Syria, the growing sectarian rift in Iraq — all of these show that the circumstances compel the resolution of the Kurdish issue,” Turk said. “Kurds should be seen both as the sign of stability and instability in the Middle East. It’s not possible to ignore the Kurds who make up 15% of the population in Syria, topple the [Syrian leader Bashar al-] Assad regime, and establish a democratic state siding with groups such as al-Qaeda or Jabhat al-Nusra.”

“It’s not possible to establish a democratic Middle East without resolving the Kurdish issue. Kurds live not only in Turkey but also in Iraq, Iran and Syria. And the developments in all of these parts impact the others,” he went on to say. “Kurds have proved that they have serious political power. It’s important to acknowledge this. If we lose our hope to be able to resolve this issue, we will end up experiencing even deeper tragedies.”

Turk argued that the Kurdish side has done its share to help this process kick off as a success. He cited Kurdistan Workers Party (PKK) leader Abdullah Ocalan’s Newroz message where he called his followers to end the armed movement and for PKK forces to start withdrawing from the country on May 8 — which according to Turk might be completed by the fall. Turk also talked about this process as being unique — that there is no intermediary between the government and Ocalan. "Once this normalization process is successfully completed, there will be no need for arms," he said. "But in their hearts all Kurds also expect to see Ocalan free." While talking about the prospect, though, Turk said that it is early to debate these subjects, as well as the State Department's de-listing the PKK as a terrorist organization. "Who does what first is important. There may be thoughts about it, but it's too early to talk about these steps at this stage. It would hurt the process."

“The ball is now on the government’s side,” he said. “But I don’t know anything about the government’s road map as to what is next. And I don’t want to criticize it without any knowledge.” He added, “There is no problem on the Kurdish side. As long as the way of thinking about the Kurds doesn't change, there won’t be any change for the better.”

Turk talked about a few issues that make them doubt the sincerity of the government. “We are curious whether Turkey will be able to switch from a single nation to a multinational formation,” he said. “Not everyone is a Turk, but we’re all citizens of Turkey. Therefore, there needs to be a new definition that defines the citizen.

“The prime minister sometimes says assimilation is a crime against humanity but he does not consider allowing Kurds the right to education in their mother tongue. If a language is not used in education, you kill its chances to survive. We won’t give up from our demand in seeking education in our own mother tongue. It’s our birthright.”

What is really critical, however, is the newly implemented local government legislation. “Kurds need to be included in governance of places where they are in the majority. It’s time to move away from a centralized government to a form of administration that’s decentralized. This is very important for us,” he said. “What the newly implemented municipality legislation does is something worrying. There is a difference between transferring the power of local administrations from one side to the other versus advancing these local administrations’ powers. The newly passed law places the mayors under the authority of the governors, introducing a full tutelage. This does not achieve the strengthening of the local administrations.” Turk argued that “this is in direct conflict and contradiction with the process that the government is leading, and that is a concern.”

Turk also talked about the drafting of the new constitution as a hope to help resolve the Kurdish issue, but he expressed disappointment with the Republican People’s Party (CHP), the main opposition party. “The CHP argues they won’t give up Turkishness, or allow the changing of the first three articles of the Constitution,” he said. “But this constitution was written by the military — who today are on trial. You can write Turk if you like on every single page of the constitution. We don’t have an issue against Turks, but we like to get recognized as Kurds.” Turk explained that this recognition would mean the establishment of a democratic autonomy.

“We are open to discuss the changing of the parliamentary system to a presidency if it is going to be about reforming the governance all together — including the local administrations,” he said. “But if this is a change only to advance the prime minister’s powers, we’re against making this change. This can slowly turn one into being a dictator. Not that I'm saying it for the prime minister.”