Lebanon's political stability and instability have always depended on external key powers; today, the effect of the Syrian crisis, is no different. 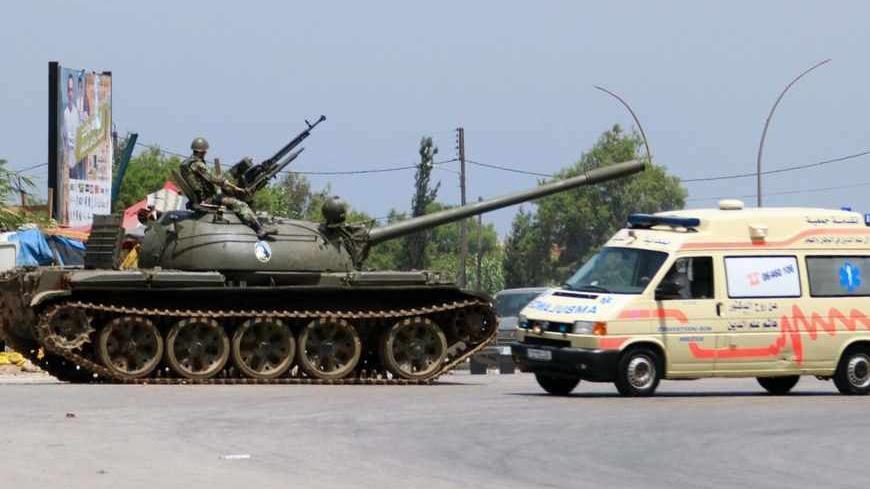 A Lebanese army soldier is seen atop his tank as an ambulance travels past in Tripoli, May 20, 2013. Tripoli has been seeing sectarian fighting resulting from Syria's civil war; some see that another summit of power brokers is needed to come to Lebanon's rescue once again. - REUTERS/Omar Ibrahim

Parliament Speaker Nabih Berri, asked for comment on his disappointment on the failure to reach an agreement on a new electoral law after so many attempts and bridging proposals were made, is reported to have said that he thought there could be a Lebanese Doha.

This is to suggest an inter-Lebanese agreement like the one reached in Doha, Qatar in 2008, but in Beirut this time to avert the dangerous crisis looming in the horizon. The outcome of the 2008 agreement was engineered by the key regional power holders or patrons of the different Lebanese factions, in direct and indirect ways.

The successful bargaining for the Doha agreement among the factions that met in the Qatari capital put an end to the state of paralysis and the dangerous tension in the country. The agreement allowed for the election of a new president and the formation of a government.

Nevertheless, this time polarization at home has been maintained, backed and encouraged by polarization abroad among the friends of the different factions, not necessarily about the electoral law but reflecting other points of contention that could be affected by the law to be adopted.

There has been no readiness by external friends to compromise  or to look for a way out of the crisis, whereas differences over the major issue of contention, Syria, have been deepening and becoming more aggravated, leaving Lebanon in a state of crisis over the electoral law. Yet an agreement among external friends or power holders in Lebanese politics as a necessary sine qua non to work out an agreement at home, and contain and settle a crisis, is not new to Lebanese politics. Indeed, it is the iron law of domestic politics.

Some good examples are very revealing of this anomaly or excessive vulnerability of Lebanese politics to external agendas. In 1958, the civil war in Lebanon between a pan-Arab nationalist constituency and the pro-Western policy of the late President Camille Chamoun was settled by a direct US-Egyptian understanding putting an end to the civil war and making for a return to normalcy, despite the different slogans carried here and there by the two sides.

In 1969, a severe political and governmental crisis over the status, role and freedom of operation of the newly established Palestinian revolution in Lebanon was negotiated by the Egyptians, bringing together the army and the PLO leadership under Egypt’s aegis to reach the Cairo Accord, which granted rights of action for the Palestine Liberation Organization.

In 1976, after the civil war broke out in Lebanon over Palestinian status and freedom of actions, a mini Arab summit convened in Riyadh bringing together the patrons or friends of the two parties involved; the summit came up with a way to contain and settle the crisis. This was confirmed by a later Arab League summit meeting in Cairo which provided the idea to deploy an Arab peacekeeping force to observe and monitor the Arab-engineered settlement of the crisis. This later became a Syrian peacekeeping effort after Syria was able to subcontract the Lebanese stabilization role in return for controlling the country.

In 1989, to end the war in Lebanon (in which Syria got involved), the tripartite committee of the heads of states of Saudi Arabia, Algeria and Morocco, entrusted by the Arab League, worked out the Taif Accord in Saudi Arabia providing for a new distribution of power among the different communities; this created what we know as the Taif formula.

And finally came the Doha accord, after the crisis that erupted in the aftermath of the assassination of former Prime Minister Rafik Hariri and the difficulty in maintaining a newly reached understanding without having the necessary external patronage for it. It was an accord that, like seemingly always in Lebanon, reflected the existing balance of power among the external power brokers at that moment in time.

In the current Syrian crisis, what protected Lebanon for more than two years from being drawn into the crisis was an understanding among key external actors. Yet the growing conflict over Syria among these actors has changed the givens; hence, Lebanon is slipping rapidly into the Syrian quagmire.

Yet the crisis today and the inability to settle it reflect the strong polarization over Syria among the external actors; the fear of the unknown has caused the actors to not want to pressure their domestic friends into an accommodation over a domestic issue that could tip the balance of power in either direction and they are waiting to see how things will unfold in Syria or waiting for someone else to make the first concession.

The major crisis that Lebanon faces and that is threatening to the country, whether via civil war dragging external actors into it or total paralysis of state institutions, often is characterized as involving national goals, but in reality the differences are mostly along sectarian lines, although not exclusively. They reflect strong political and sometimes ideological solidarity with regional actors — solidarity based on supranational or subnational identity with external actors. Yet they are often formulated and expressed in domestic goals. Such strong internalization of external issues is due to the absence of a shared, well-entrenched national identity beyond slogans. In other words, it is the result of the failure to construct such an identity and define its relations of solidarity and what that entails, regarding the larger identities to which an individual or a group belongs.