Ideological and social polarization is preventing a strong Saudi rights movement from emerging. 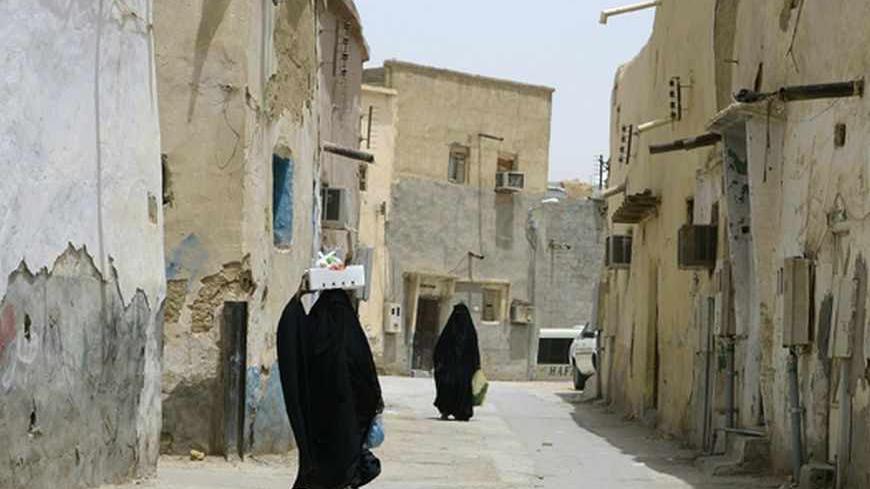 Veiled women carry vegetables as they walk along a street in the neighborhood of Shmeisy in Riyadh, April 22, 2013. - REUTERS/Faisal Al Nasser
Bayan Perazzo
@@BintBattuta87
May 27, 2013

Amnesty International published an annual report on the state of human rights in Saudi Arabia last week. The report covered a large scale of human rights violations within the country; everything from women’s repression, migrant worker mistreatment, execution of minors, sectarianism, arbitrary detainment and torture was discussed. The largest section of the report, however, was in regard to suppression of dissidents and the detainment of human rights defenders within the kingdom.

Saudi Arabia is home to one of the world’s most notoriously oppressive regimes. A recent report by Freedom House listed Saudi Arabia as one of nine countries identified as the world’s worst human rights abusers. Several human rights organizations, including Human Rights Watch, have continually criticized the Saudi government’s absolute failure to respect the most basic of human rights.

Despite the lack of freedom within Saudi Arabia, since the start of the Arab Spring there have been a notable number of groups and individuals which have publicly vocalized criticisms of the Saudi system. For some time, protests appeared limited to the eastern province city of Qatif. Due to Qatif’s Shiite population, however, the government was able to isolate these protests for some time by playing into the usual sectarian discourse. It did not take long for it to become clear, however, that it was not only the Shiites who were demanding more rights. Demonstrators in the Qassim province — an area traditionally known for adhering to a strict Sunni interpretation — also took to the streets in demonstration, thus discrediting the Saudi government’s discourse that protests were merely an isolated “Shiite” problem.

Despite demands for rights among several groups of different backgrounds, what has become very apparent is that social divisions within Saudi society have greatly hindered the human rights movement. Government propaganda quickly attempted to discredit any groups that were pushing for human rights: protesters in Qatif became heretics serving a “foreign nation” (implying Iran), demonstrators in Qassim were deemed terrorists who were a threat to the security of the nation, and liberal activists had been “brainwashed by infidels” and were attempting to “westernize” the country. A number of Saudis believe government propaganda. Many others defend one group’s pursuit of rights while condemning similar demands coming from other individuals, due to sectarian or ideological biases.

In regard to such divisions within Saudi society, one activist from Riyadh told Al-Monitor: “It’s not the people’s fault, it’s the system. From a very young age we are taught that our identity should be two things; a ‘pure’ Saudi and ‘real’ Muslim. This country is incredibly diverse in background, however, rather than celebrating our diversity, we are taught to hide any differences and to fit into the status quo. We are to conform to societal expectations and to follow the government interpretation of Islam. Anyone who does anything different or brings anything new to the table is written off as either not ‘pure Saudi’ or not a ‘true Muslim.’”

An activist from Qatif who tweets as @QatifRev described to Al-Monitor via email the complications of supporting people from different ideological backgrounds within Saudi society. “It’s difficult in Saudi Arabia to stand for the human rights of a group you don’t belong to [ideologically]. It’s difficult because you might get rejected by that group, or even lose acceptance among your own group, particularly if the relationship is hostile between the two groups. I’ve been rejected when supporting other groups; they told me they didn’t need help from a person from my group. I was also questioned by some members of the group to which I belong, for supporting people they think of as terrorists.” He further explained that his inspiration was Nimer al-Nimer, a Shiite cleric; “[Nimer] spoke in a number of speeches about Sunni political prisoners, he defended their human rights and emphasized the importance of defending suppressed people regardless of their ideology”. Nimer, however, was detained by Saudi security forces in the summer of 2012 and is currently on trial for his life.

Another individual who has managed to see beyond these social constraints is Saudi journalist and human rights defender Iman al-Qahtani. Qahtani has worked on publishing stories on people of various backgrounds. When asked why she works with people of different backgrounds, she simply told Al-Monitor: “Every human’s basic rights should be respected.” Qahtani is a powerful and unique voice within the kingdom, and she, too, has paid the price for raising her voice in a country that prefers silence. Qahtani was recently forced to stop tweeting due to aggressive harassment from the Saudi regime. She told Al-Monitor: “The government tells people that activists are supporting terrorists or foreign agendas, and most of the people believe this. People here in Saudi Arabia in general do not understand the most basic definition of human rights. Therefore, they do not understand the need to apply the concept to everybody, regardless of background. The basic knowledge of human rights is that you cannot differentiate between people based on race, nationality, religious background, political affiliation or beliefs. This obsession with defending only those who are like minded, this ideology is destroying everything here.”

One of the most discussed rights associations within the kingdom is the Saudi Civil and Political Rights Association (ACPRA). It was founded in 2009 in response to a worsening human rights situation within the kingdom. The association has worked fervently on documenting human rights violations and promoting human rights awareness within the kingdom. While the organization worked mostly with families of detainees in Buraidah, they also supported all minority groups within the kingdom. While ACPRA’s efforts would be praised in most countries around the world, the Saudi government treated them as criminals. Seven members are currently serving prison sentences. Two of the association’s founders — Mohammed al-Qahtani and Abdullah al-Hamed — were sentenced to more than 10 years in prison earlier this year, though their supporters seemed absent. “Qahtani and Hamed's detention produced no equivalent of the massive mobilization in Kuwait over the arrest of the opposition politician Musallam al-Barrak,” Saudi lawyer Abdul Aziz al-Hussan to ld Marc Lynch of Foreign Policy.

Though many Saudis ardently supported ACPRA, many others believe the group had a hidden agenda or refused to support them based on ideological differences people believed that they had with one or more of the group’s members. One ACPRA group member who is currently in prison, Mohammed al-Bijadi, was arrested for protesting alongside family members of detainees in front of the Ministry of Interior. Once he was in prison alongside the people he had protested for, one released detainee tweeted that the detainees in prison didn’t like Bijadi due to ideological differences.

Saudi Arabia doesn’t lack courageous individuals who are willing to take on oppressive government policies. In fact, the number of people who are doing so has been growing significantly. However, what the country does lack are individuals who are willing to push for a society that respects the rights of every citizen beyond any ethnic, sectarian or ideological differences. Unless the population can unite and learn to see beyond these differences, the Saudi government will continue to violate human rights.

Bayan Perazzo is a professor in Saudi Arabia, and has an interest in MENA politics and Islamic studies. On Twitter: @BintBattuta87