Restoring the 'Past Glory' Of the Israeli Shas Party

Aryeh Deri, the newly re-appointed head of the ultra-Orthodox Shas party, inherits a sacred movement which has lost its support base, writes Mazal Mualem. 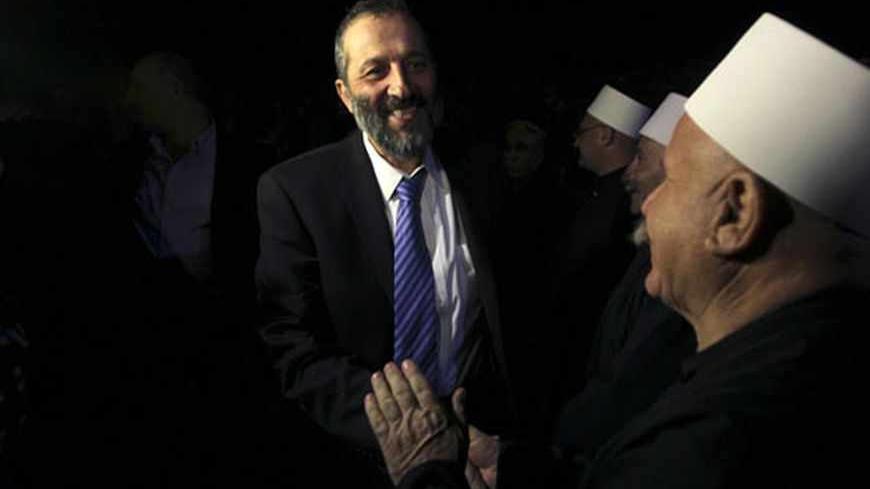 “I want to return Shas to the citizens,” proclaimed new-old ultra-Orthodox Shas party Chairman Aryeh Deri, the morning after former Interior Minister Eli Yishai’s official dismissal from head of the movement on May 2.

In an interview with the army radio station, Deri sounds happy and self-confident, as befits one who realized a dream against all odds and now emerges ready to play the role of his life.

But Deri is likely to discover very quickly that his objective of “restoring past glory” — to use Shas’ election campaign slogan — is not an easy one to achieve. He may find out that his aspirations to turn Shas into a large party once again, and himself into a social leader addressing the wide public, is not commensurate with his strategy of placing the ethnic conflict front and center. While Deri prefers to call this “a struggle against Sephardi exclusion,” it is but a euphemism for the things he himself executes: intentional encouragement of a public discourse designed to cause ethnic-class strife — for his political purposes, of course.

Deri acts with pure cynicism. He declares his desire to return Shas to the citizens, when in fact he talks about citizens of a certain type. In effect, in light of the ethnic provocations he has generated since returning to political life, he cannot be — and does not want to be — everyone’s political home.

Deri is not naive. Take, for example, the recent public-media storm which he generated on the “ethnic genie” background. This was the protest over the absence of Mediterranean-Sephardi intellectuals from decorating the new bank notes issued by the Bank of Israel. All the figures stamped on the new bills are of East European-Ashkenazi poets. “It’s impossible that they couldn’t find even one Sephardi poet’s profile to grace the bills,” said Deri at the opening of a government meeting that discussed the authorization of the new currency, on April 28. “Money with a Sephardi portrait is not worth any less. I call on the government ministers not to raise their hands in favor of approving the new bills.”

When Deri talks about “exclusion of Sephardi Jews” from money bills and creates a media and public furor, he is trying to attract the weaker elements in the Likud party, in Shas, in the Labor party; the Sephardi Jews and the Israeli Arabs are his unmistakable target audiences.

The question is, whether that ethnic genie can get Deri the goods. In the recent election he made extensive and noisy use of it, unsuccessfully. Shas emerged from the elections with 11 mandates, the exact number it managed to garner in previous elections without the ethnic genie.

Now, despite the failure of the ethnic campaign in the elections, Deri returns to the “crime scene.” The question is, why? It seems that Deri believes that the results of the recent elections created an excellent opportunity for him to head the camp of what he calls “the second Israel.” According to Deri’s world view, the “Sephardi” concept is a code name for an entire camp including the disadvantaged, disconnected populations in the periphery, and even the Israeli Arab villages (when Deri was interior minister he was known for his close contacts with the leaders of the Arab sector). In effect, Deri wants to create an alternative ideological, political and social leadership vis-a-vis the alliance between Finance Minister Yair Lapid and Trade and Industry Minister Naftali Bennett, who are emerging as the new leaders of the middle class that is planted in the heart of the “white Israeli tribe.” In this way, so Deri believes, he will succeed in increasing Shas’ power come the next elections.

To his credit, we can say that Deri correctly identifies the great electoral potential of the populations that are in his crosshairs. He also correctly views the option of uniting them in one camp against the white tribe. The problem is that Shas is not the appropriate platform, and Deri is not the right person for this battle.

Shas is an ultra-Orthodox sectarian party, which under Eli Yishai denied the discrimination against Sephardi girls in Ashkenazi educational institutions, and systematically kowtowed to the ultra-Orthodox Ashkenazi political leadership. Thus, even in its own home base, Shas did not contribute to the struggle against exclusion of Sephardi Jews but actually harmed that struggle in the most severe and embarrassing manner.

Deri, of course, can correctly claim that none of this happened on his watch. But the burden of proof rests on him, first and foremost.

Till then, he will remain no more than another Sephardi politician who makes cynical use of real misery.

Mazal Mualem started her journalistic career during her military service in Israel, where she was assigned to the weekly army newspaper, Bamachane. After her studies, she worked for the country's second-largest Hebrew-language daily, Maariv. In 1998, she joined English-language daily Haaretz, covering local governance, and later, she was appointed chief political analyst for that paper. After 12 years with Haaretz, she returned to Maariv as their chief political analyst.