Palestinian refugees from Syria often fall outside of the international safety net, which is already strained because of the war. 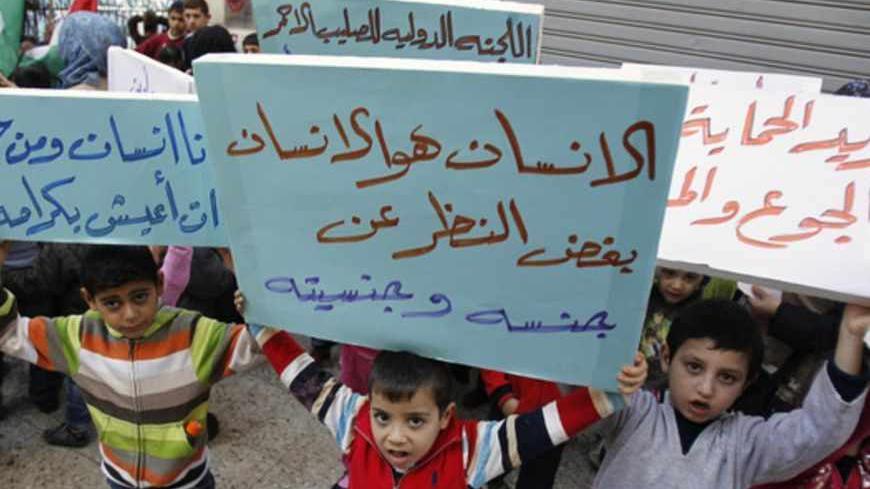 Palestinian children who were living in Yarmouk Palestinian refugee camp before fleeing Syria hold banners during a protest in front of the International Committee of the Red Cross in Beirut, Jan. 17, 2013. Banners read, "Man is man, regardless of gender and nationality" (C), "I am a human and I have the right to live with dignity" (L) and "We want protection from hunger and diseases." - REUTERS/Sharif Karim
Samar El Yassir
May 20, 2013

Syria’s civil war has forced more than a million Syrians to flee their homeland in search of protection and shelter in Turkey, Jordan, Iraq and Lebanon. Palestinian refugees from Syria are particularly vulnerable as a result of the lack of recognition and support they receive from the international community.

Many of these Palestinian refugees are experiencing displacement for a second or third time. Statelessness multiplies the horrors and fears with each new war and displacement.

That leaves Palestinian refugees fleeing the conflict in Syria in limbo. More than 50,000 Palestinians already have sought refuge in Lebanon. Thousands more arrive each month. They arrive with the clothes they are wearing and few or no resources to survive on their own. So they seek shelter with other Palestinian families who have been living for decades in Lebanon’s already overcrowded refugee camps. UNRWA, understandably, has been overwhelmed by the sudden influx and the challenge it presents to care for them.

In a survey we conducted in January to determine their needs, we discovered more than 90% of refugee families have no income, making it impossible for them to afford the cost of living in Lebanon, which is considerably higher than in Syria. Most exhausted much of their savings during the conflict and flight to Lebanon.

Nearly all the Palestinian refugees interviewed in the survey cite food as their biggest expense. Families struggle to provide three meals a day. Adding to their daily worries about the most immediate needs is their concern about what’s happening in Syria and their fear that this displacement could become permanent. More than 60% of households told us they are crammed into small living spaces, sometimes 20 to a single room, without electricity or heat.

Palestinian refugees from Syria are surviving in large part due to the generosity of Lebanon’s pre-existing Palestinian refugee community. Palestinian refugees in Lebanon know too well the bitter taste of statelessness and exile. Though they are poor and without resources, they have opened their homes and hearts time and again to ease the burden of war and destruction.

In Ein el-Hilweh camp in southern Lebanon, one woman told our surveyors she had 26 people sharing her small two-room apartment. This woman had opened her home to other Palestinian refugees because she herself had once been forced to take shelter in Syria after her camp in Lebanon was destroyed.

In Lebanon, Palestinian communities are opening up their hearts to new arrivals, recalling their own refugee experiences that are still fresh in their minds. They are generous and resilient. UNRWA and NGOs are trying to cope, increasing assistance as they can. But resources just aren’t there to absorb the thousands of new arrivals each day. They need help — clothing, mattresses, blankets, medicines — but mostly they need the knowledge that they have not been forgotten by the international community.

Samar El Yassir is ANERA country director in Lebanon. Since 1968, ANERA has provided development, health and education programs to Palestinian communities and impoverished families throughout the Middle East.