As more Syrians flee to Lebanon, displaced Palestinians from refugee camps in Damascus threaten the fragile political and sectarian balance in the country, writes Nasser Chararah. 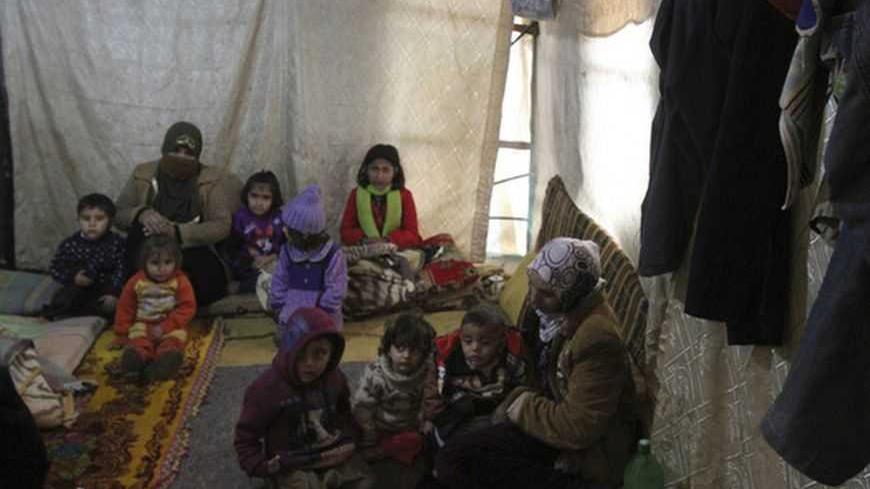 A Syrian refugee woman carries her child as they sit inside a tent near Tripoli January 9,2013. - REUTERS/Omar Ibrahim

Lebanon cannot apply the principle of “self-distancing,” which it adopted for the crisis in Syria, to the commitment it undertook to receive the hordes of displaced Syrians flooding into its territories. The number of refugees has been unofficially estimated at 300,000, while official figures put it at 150,000. The demographic and economic capability of Lebanon to take in Syrian refugees poses a problem less severe than that of Lebanon’s capacity to absorb the Palestinians among them. Beirut is uneasy with this displacement, which brings to mind the historical Lebanese division over receiving Palestinian refugees in Lebanon, one of the key reasons for the outbreak of the 1975 civil war.

Syria has witnessed infighting recently between Palestinians, who are divided into two political camps: those that are pro-Assad and those against the regime. The first comprises most notably the Popular Front for the Liberation of the Palestine's general command, while the second encompasses in particular the Islamic factions, including Hamas, however tacitly. The concern that displaced Palestinians from Syria might transfer their military conflict from the Yarmouk camp to Lebanese refugee camps — particularly the Ain al-Helweh camp, which is already in a tenuous security situation — is taking its toll on the political climate in Lebanon.

Last weekend, these concerns were realized when the father of a displaced Palestinian family from Syria physically assaulted a Lebanese soldier. At the entryway to the Ain al-Helweh camp, the soldier demanded to verify the identity of the man’s three veiled daughters. Due to his religious beliefs, the Palestinian man refused and lashed out. The incident created ripples and left tension in its wake within the camp between the Islamic factions that rushed to assist the displaced Salafist Palestinian and the Syrian regime supporters, who felt the battle cry of the Islamists was directed against them. The Lebanese army trod cautiously and dispelled the Palestinian fear of any possibility that the conflict could transfer from the Yarmouk camp to Ain al-Helweh as Lebanese intelligence expected, especially with the rapidly escalating number of refugees.

Just as this incident points to a potentially unstable security situation as a result of the new Palestinian displacement, it also highlights the dire human struggle taking place. This family — comprised of a father and three daughters — has rented a room in the camp for $200 per month. The room, which does not meet basic health standards, will need to accommodate two more family members once they arrive from the Yarmouk camp.

Even though organizations within the camps are trying as much as possible to assist those families most in need, they are hindered by a lack of capacity in the face of this urgent situation. This climate sheds light on the condition of Palestinian refugees in Lebanon, especially after the United Nations Relief and Works Agency (UNRWA) abandoned the role it played in fulfilling their basic needs five years ago. Currently, it is expected that the government, as well as UNRWA, will be jointly blamed for neglecting displaced Syrians, in addition to their initial failure in ensuring decent conditions for Palestinian refugees in Lebanon.

Up until now, 1,250 Palestinian families have arrived from Syria to the Ain al-Helweh Camp, while the camps of Tyre house 350 families. There are no official estimates regarding the number of families who were displaced to the Bekaa Valley and Beirut; yet, a larger number is expected to flood in since the settlement that was reached in the Yarmouk camp did not last.

According to Lebanese intelligence, two main factors led to mounting concern about the displacement of Syrian Palestinians to Lebanon. First, the three waves of Palestinian displacement in 1934, 1967 and 1970 were thought to be temporary, yet protracted. These refugees became a part of the demographic and sectarian fabric of Lebanon, which is highly sensitive toward any newly arriving migrants.

Moreover, during the First Republic, the Christians of Lebanon were the party most concerned about the settlement of Palestinians — the majority of whom are Muslims — in Lebanon, for fear of the disrupting political and numerical balance there.

Since the current political climate is reviving the historical conflict between Sunnis and Shiites, the Shiites of Lebanon are also concerned about the influx of Palestinians, the majority of whom are Sunni. Lebanon has historically harbored fears of Palestinian settlement dating back to the Palestinian exodus of 1948. Thus, concerns persist regarding the displacement of Syrian Palestinians — which was supposed to be short term but is quickly becoming permanent.

The second factor is related to security. Lebanese society is currently characterized by a widespread fear that Palestinian military clashes, which were ignited between the supporters and opponents of the Syrian regime, might move from the Yarmouk camp to Lebanon.

Even though Syrian displacement is being dealt with from a humanitarian perspective, the political aspect — especially when it comes to Syrian Palestinians — cannot be swept under the rug. Recently, the suggestions of the Free Patriotic Movement, a Christian pillar in the March 8 Coalition, have floated to the surface, calling for a reasonable approach to the issue of Syrian Palestinians. MP Ibrahim Kanaan said that it would be incredibly difficult, given the current situation, to insure a decent life for refugees. He suggested that the international community, in collaboration with the state, transfer these refugees to countries that are capable of helping them overcome their distress and can provide them with a decent quality of life.