The Palestinian Investment Fund, established in 2003 to bring transparency to the Palestinian Authority’s assets, may also be promoting monopolies. 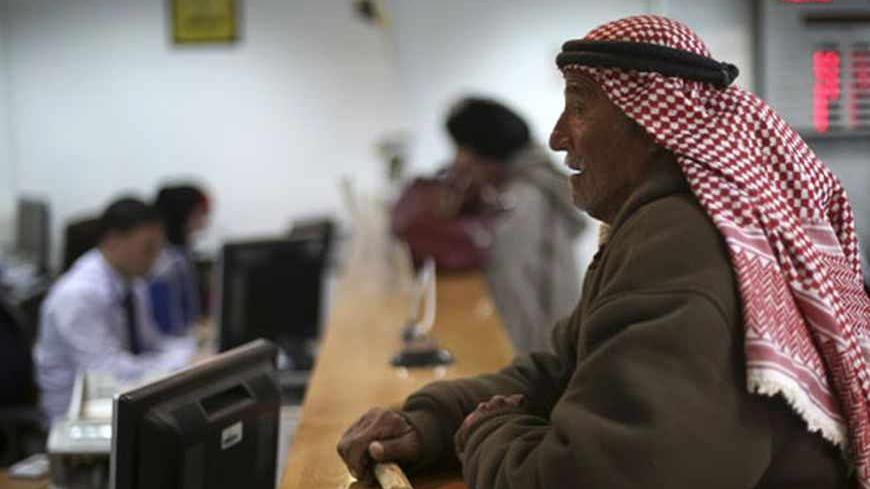 A Palestinian man waits at a counter to make a withdrawal at the Housing Bank for Trade & Finance in the West Bank city of Ramallah, Jan. 22, 2013. - REUTERS/Mohamad Torokman

The Palestinian Investment Fund (PIF) is a sovereign fund for the Palestinian Authority (PA) intended to manage PA investments inside and outside Palestine. The PIF was established in 2003 to satisfy the international community’s request that then President Yasser Arafat promote transparency and declare the PA’s properties and investments. At the time, it was interpreted as an attempt by donor countries to reduce Arafat’s powers, restrict his control over public money and constrain his freedom in spending funds from outside the budget. Arafat was accused of running non-registered investments to spend on military matters and misallocating some aid from donor countries intended for refugee camps in the diaspora, especially in Lebanon.

The Western demands included establishing the post of prime minister and the appointment of a finance minister to manage public money. Salam Fayyad, who comes from outside the Palestine Liberation Organization (PLO), became the first PA finance minister.

The PIF was established by a presidential decree that stipulated that the fund be placed under the supervision of the Finance Ministry. So, Fayyad assumed the presidency of the fund and he appointed Mr. Khalid Salam (Mohammad Rashid) — Arafat’s economic adviser — as the fund’s general manager. All PA property and assets at home and abroad were placed under the fund’s supervision. For example, the PA’s share in the cellular networks in Tunisia, Algeria and the Gaza Strip — from which Israel withdrew in 2005 — as well as the PA’s stakes in telecommunications, electricity, real estate and other sectors were added to the fund. A few months after Arafat’s death in November 2004, the fund’s management was passed from Salam to Fayyad, who managed the fund for a very short time.

When Hamas won the January 2006 elections and formed its government, there was a tug between Hamas and Fatah-PLO over who would control PA institutions: the government, that is, Hamas, or the presidency, that is, Fatah-PLO?

Under the emergency measures announced by PA President Mahmoud Abbas in response to the Hamas takeover of Gaza, the PIF’s management was transferred from the Finance Ministry to Abbas’ office, where Abbas’ economic adviser Dr. Mohammad Mustafa was made PIF general manager, then chairman of the PIF board of directors.

There is no doubt that the fund’s establishment protected the Palestinian people’s property by preventing their properties’ loss and dissipation as happened with PLO assets. The PIF also supported the PA at critical times. The fund’s work contributed to the revitalization of the Palestinian economy, raised the gross domestic product and created thousands of jobs.

The PIF’s annual report for 2011 showed a total value of $888 million and control of $747 million in property, a slight drop from 2010. This drop was attributed to the distribution of $45 million in dividends for 2010 and 2011, and to the local and global economic crisis. The fund made about $33 million in profits after taxes in 2011, bringing the total profits earned since the fund’s establishment to $800 million. In the year 2011, the fund transferred $20 million of its profits to the PA treasury, bringing the total money disbursed from the fund to the PA treasury between 2003 and 2011 to more than $653 million, or 105% of the value of the fund’s paid-up capital.

The fund's rules of procedure state that the PIF is as a limited public company, is owned by the Palestinian people and is independent both financially and administratively. The fund has a board of directors and is an independent public body. The fund manages a number of investment portfolios and specialized companies, which in turn invest in a range of vital projects.

Since 2012, the fund is administered by an 11-member council. There used to be seven members before that. The fund also has a general assembly of 30 members. The fund’s council is headed by Mustafa, who is also the fund’s general director and Abbas’ economic adviser. Mustafa’s name comes up every once in a while as possible prime minister for a national unity government in the event that the PA and Hamas reconcile.

Without minimizing the fund’s achievements, there is a need for further reforms, both in the administration and investment spheres: