Most Israelis Back Arab Peace Initiative

A new poll indicates that if Israeli Prime Minister Benjamin Netanyahu adopts the principles of the Arab Peace Initiative, 69% of the Israeli public would support him. 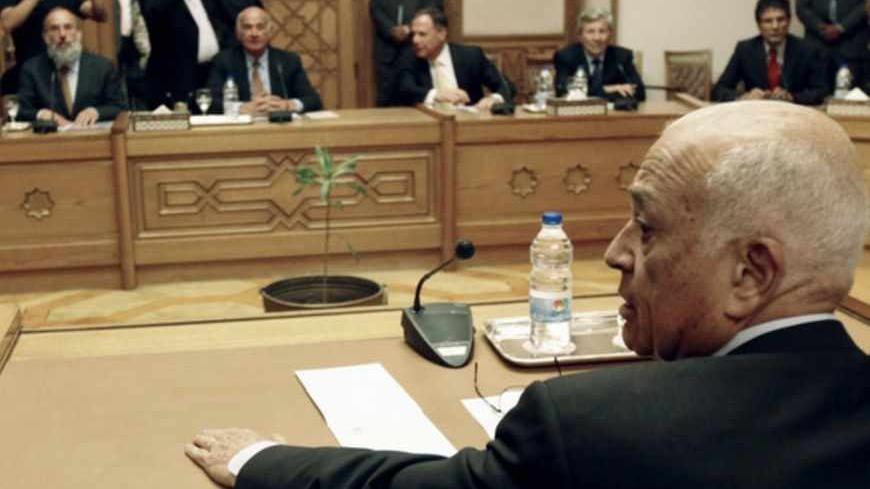 On Saturday, May 25, at the annual conference of the World Economic Forum in Jordan, I had the chance to exchange a few words with Amr Moussa, who was secretary-general of the Arab League when it adopted the historic Arab Peace Initiative in 2002. Moussa, who had previously served as Egypt’s foreign minister for many years, knows Israel well, but doesn’t understand it.

Today, too, as he sits on the porch of the convention center on the Jordanian side of the Dead Sea, Moussa wonders why not a single Israeli leader has picked up the gauntlet that has been lying at Israel’s feet for over a decade. I told him that a new opinion poll being published this week shows, categorically, that if Prime Minister Benjamin Netanyahu decided to do so, instead of giving in to his party and his government coalition, then most of the public, including those who just recently voted for right-wing parties, would back him up.

“So what?” Moussa asked, his face frozen. “Do you really believe that Bibi [Netanyahu] will do it?” I replied that in order to answer his question, we would have to listen carefully to what US Secretary of State John Kerry says the next day, in the adjacent hall.

Did President Barack Obama authorize him to lay a regional peace plan on the table? Just now, Kerry elicited a formal statement of support from the Arabs for the annexation of settlement blocks (the practical meaning of “land swaps”). What did Bibi give in return? Sour reactions expressed by “close associates.”

According to a senior Palestinian official accompanying the entourage of Palestinian President Mahmoud Abbas (Abu Mazen) to the big annual event, the secretary of state heard the following formula from the US president: If Netanyahu accepts the principle of the 1967 borders along with mutual, agreed-upon land swaps, the Palestinians, for their part, will drop their demand for a construction freeze within the settlements. The rationale is quite clear, the man explained. If there’s agreement on a border line with “alterations” that include settlement blocks, then some of the settlements will be annexed to Israel, and the rest will be handed over to the Palestinians. Will this earth-shattering news get Bibi to utter the magic words, "1967?"

The findings of the poll, being published here for the first time, indicate that Netanyahu cannot claim he lacks a mandate from Israel’s public. According to the poll, commissioned by the Israeli Peace Initiative organization, once the principles of the Arab Initiative were explained to them, 55% of the people interviewed said they would support it to some degree. Only 27% ''strongly oppose'' the initiative, while 17.5% of them answered that they ''don't know" once the fundamentals of the Initiative were presented to them. But in response to another question — what their position will be if Netanyahu adopts the Arab Initiative and reaches a final status agreement with the Arab states — the number of supporters soared to 69%. The interesting finding regarding this question is that only 18% continued to ''strongly oppose'' the initiative (revealing that nine percent of those interviewed changed their minds in favor of the initiative between the two questions).

The poll was conducted on May 20 by New Wave Research, an Israeli polling company, among a random sampling of 500 Jewish, Hebrew-speaking Israelis, aged 18 and over. The statistical sampling error was +/- 4.4%.

The poll shows that Netanyahu and President Shimon Peres are perceived as the only two leaders suited to conducting negotiations with the Arab states. Netanyahu is perceived as “more suitable” (28%) than Peres (24%), while Finance Minister Yair Lapid trails behind with some six percent, after Justice Minister Tzipi Livni and former Mossad chief Meir Dagan.

The most interesting result to emerge from the poll indicates that even though the initiative has been on the shelf for over 11 years, 73.5% of the Hebrew-speaking public had never heard of it, or had heard just a hint of it but remains unfamiliar with the details. Of these, 20.5% were "slightly knowledgeable" about the initiative and only six percent were "very knowledgeable."

The authors of the poll emphasize that the lack of understanding about the initiative points to a tremendous potential for support of the plan.

Koby Huberman, who established the Israeli Peace Initiative along with Yuval Rabin, the son of late prime minister Yitzhak Rabin, is committed to taking up the gauntlet. He promises that activists of his forum will spare no effort to convince the Israeli public and decision-makers to adopt the “Israel Initiative” — in other words, the initiative to conduct negotiations with the Palestinian side based on the Arab Initiative. In his view, the regional approach is the right way to bring about an end to the conflict and to establish normal relations between the neighbors.

“Only a resolution of the conflict, despite the painful compromises involved, and not the continuation of its management,” Huberman emphasizes, “is the way to provide future generations with security and prosperity.” Huberman expresses hope that not only will an Israeli leader be found, but also an Arab one, with the necessary courage to translate the regional vision of peace into reality.

A senior Jordanian figure told Al-Monitor that the July 2007 joint visit to Israel by the foreign ministers of Egypt and Jordan (the two Arab countries that have already signed peace agreements with Israel) as the high point of a public-relations campaign for the Arab Initiative, was a significantly watered-down version of the Arab League’s original plan to enlist Israeli public opinion in favor of the initiative. According to that plan, a delegation comprised of at least seven foreign ministers, including representatives of countries that don’t maintain diplomatic ties with Israel, was supposed to visit Jerusalem.

In his speech at the Dead Sea conference, Nabil Elaraby, Moussa’s successor as secretary-general of the Arab League, contended that while the Arab world is undergoing dramatic change, the time might well be ripe for a change in the Israeli-Palestinian arena as well. Perhaps the findings of the new poll will convince Elaraby and his friends that now is the time for a dramatic change in their attitude toward the Israeli public.

If, in fact, they want to reach out to the Israeli public, they would do well to greet those who shape its opinions, meaning the Israeli journalists who accompanied President Shimon Peres to the conference in Jordan, more positively than they did at the time. As reported in the Israeli media, when the Israeli delegation entered the convention’s media room, Jordanian journalists announced they were unwilling to sit with the Israelis, and walked out.

On the other hand, hopefully Netanyahu and his government colleagues will not greet senior Arab peace envoys with an announcement about the construction of a new Jewish neighborhood in east Jerusalem.