Knesset member Yoni Chetboun opposes (clearly and repeatedly) the drafting of Israeli Arabs to the army: ''I don't want an Arab in IDF uniform.'' 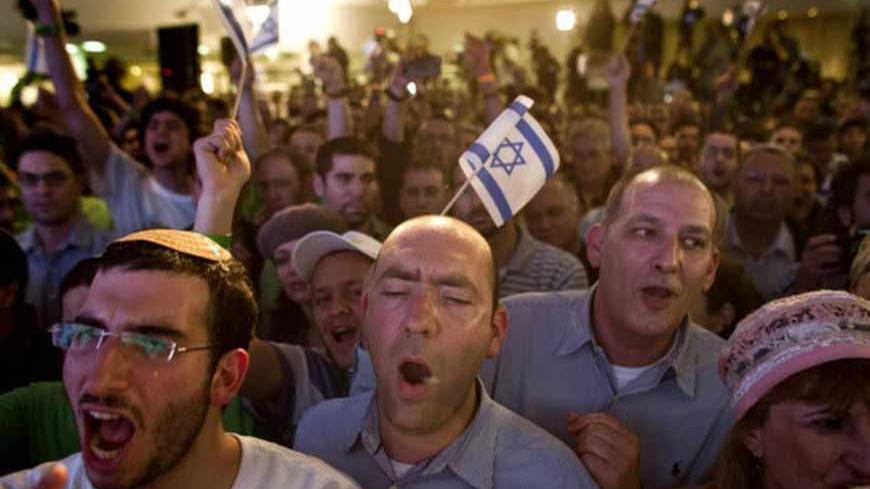 Supporters and activists of the Habayit Hayehudi party (The Jewish Home) react to the announcement of the first projections on the results of Israel's national elections at a post-election rally on Jan. 22, 2013 in Ramat Gan, Israel. - Oren Ziv/Getty Images

When I ask new Knesset member Yoni Chetboun of the HaBayit HaYehudi party if he supports former Foreign Minister Avigdor Liberman's demand to impose the ultra-Orthodox draft law on Israeli Arabs as well, Chetboun manages to surprise me. Not only because he expresses a position that is the polar opposite of Liberman's, but mainly because of the way he chooses to tell it; the unaffected way he casually says, "I don't want an Arab in IDF uniform."

You surprised me. I was sure you would side with Liberman …

"I am against bringing the Arabs into this story. If I were an ultra-Orthodox Jew, I would be embarrassed to be compared to an Arab. What does it say when you compare an ultra-Orthodox, who is a Jewish Israeli civilian living here in the state, to an Arab with a totally different narrative, who views the army as an occupying power?"

This is not a mere slip of the tongue, but an entire worldview. I understand this immediately when Chetboun repeats and enlarges on his position regarding drafting Arabs, and allows me an unfiltered glimpse into his world.

"I can negotiate and argue with the ultra-Orthodox because they are members of my nation. On that issue I am not embarrassed to say it; regarding the attitude to the army and the state, I have an ideological argument with them. But I don't have expectations of the Arabs. I don't want an Arab in uniform. His entire worldview is that the IDF is the army that occupies Palestine. That's not appropriate for the army."

"That too. 'National service,' or 'National civil service' is mere wordplay. If we are talking about service that assists within their own population, then I say: go ahead. After all, they have tremendous welfare problems. I circulated around East Jerusalem last week, they are really crying out for more welfare aid. I don't want to force them on us. I don't want an Arab to feel that I am taking him by force to be in some school in [the northern town of] Nahariya that educates their kids toward [Zionist leader Theodor] Herzl."

Do you think that Liberman acted out of political motives?

"He really believes that the Arabs need to be in this story, but I don't agree. It is not realistic. I think we should encourage them to do national service that helps themselves. To assist them in their own welfare. And I tell the ultra-Orthodox that if I was in their shoes, I would be embarrassed to be compared to an Arab; that we [Jews] are linked together in this story. There is a Jewish state here. My discourse with the Arabs is a different discourse."

"We have the Arab-Israeli who is a minority. I am happy to grant him all his rights and everything. But, in my opinion, this is a Jewish state with an Arab minority."

The Chetboun interview is conducted at the height of the coalition crisis that developed around the conscription law of ultra-Orthodox Jews, a crisis that has since been resolved. Chetboun, 34, who wears a Jewish traditional skullcap, lives in Jerusalem; he was honored with a Chief of Staff Citation during the Second Lebanon War after he evacuated, under fire, slain Golani fighters who had been killed in the Bint Jbeil battle. Chetboun spent most of his adult life in the army, and has a very emotional connection to the IDF ethos.

Chetboun grew up and was educated in religious Zionist institutions. His father is a physician who emigrated from France, and his mother ­— from Morocco. He is a member of three Knesset committees: Foreign Affairs and Defense; Education, Culture, and Sports; Labor, Welfare and Health. In addition, he serves as deputy speaker of the Knesset. He is also active in party life, as head of its religious Zionist youth wing, and was partner to one of the greatest revolutions beget by the recent elections: the old school 'politico'-religious Mafdal party was transformed, under the tutelage of Economy and Trade Minister Naftali Bennet, to the hottest trend among right-wing youths.

As someone who served many long years in the IDF, didn't it bother you that the ultra-Orthodox were dodging the draft?

"To tell you now that I, as a member of the HaBayit HaYehudi party, didn't sleep well at night because the ultra-Orthodox weren't conscripted? No. I say this as someone who served in the army and for years barely saw my wife and kids.'' (Chetboun has six children.)

"I have no innate problem with a population that studies Torah from morning to night, and views this as their mission in life. I very much appreciate the institution of the rabbinical colleges, which Israeli society had enough of. I am aware of the draft-dodging problem, but you have to change things gradually. The army also prefers gradual processes. You can't take a society that has been brought up according to a certain worldview for years and years, and then do a sudden switch.''

"Even the army would prefer that the burden-equality law would disappear from the public agenda — and I know what I am talking about. I can tell you that sources in the army prefer that the natural process of ultra-Orthodox conscription that is on the rise, would continue.''

"What happened is that during the election campaign period, Finance Minister Yair Lapid zeroed in on this issue and set the whole business on fire. I sat with very high-ranking elements of the army's Manpower Branch who were taken aback, even during the campaign period, when the HaBayit HaYehudi party suddenly jumped on this bandwagon too.''

"Yair Lapid took the equality in sharing the burden law one step too far, due to the political campaign. He wanted to show that he was going to hit them where it hurt. In recent years, more ultra-Orthodox are serving in the army even without a law."

Are you in favor of the people's army model?

"The Israeli Defense Forces must be a people's army. That is where the individual forms his identity, his link and connection to the state. That is where he meets other populations. It is our last ' nature reserve.' In an army of mercenaries, you lose your identity. Motivation plummets and empires collapse this way, from ancient Greece that rose to conquer Jerusalem, and other armies.

"If we talk about partnership with the ultra-Orthodox, it can happen via the army if we take the proper steps. We don't have to force them this way."

As part of his Knesset activities, Chetboun has begun to advance a bill dubbed "Jenin Jenin" over the controversial film of Muhammad Bakri. The movie was created following a battle waged by the IDF in the Jenin refugee camp during Operation Defensive Shield (2002). According to the bill, which has already passed its first reading, the libel law will be changed so that an entire group of people can bring class-action libel suits against those who slander them.

"In the last decade," explains Chetboun, "The army has become cannon fodder for anti-Zionist elements or those of the extreme left, who want to verbally attack Israel's legitimacy. A reserve soldier who leaves his kids at home, or an 18-year-old fellow who stands at an army barrier with the entire world breathing down his neck, have become focuses of provocation. It happens more and more. I am talking about organizations funded with millions of dollars by foundations from the entire world. Then start the tendentious movies such as Five Broken Cameras (included this year among the final five candidates for Oscars in the documentary category), or Muhammad Bakri's flagship film Jenin Jenin. Israel's legitimacy is harmed by all this. The current Prohibition of Defamation Law ('Libel Law') holds that if I harmed someone personally he can sue me, but if I harmed an entire public then I am immune. After the new law will be passed, all those who fought in Jenin can sue Muhammad Bakri in court. He has to understand that there are economic and personal ramifications to his actions."

What is your stance regarding the vision of two states for two nations?

"In my opinion, there was a very nice two-state campaign that began with former US President Bill Clinton. What a slick slogan. It caught on well. But it is crazy. That's what the Palestinians want? A demilitarized state?"

So what else [do you propose]?

"One of the big problems of the right is that we don't say 'what yes.' We have to start to talk about a Jewish state with an Arab minority with rights. I want to create a Knesset convention that will deal with alternate concepts, to that of the two states."