Israeli Minister: 'A Palestinian State Is not the Solution'

For Israeli Tourism Minister Uzi Landau: “One thing must be clear: A Palestinian state is not the solution." 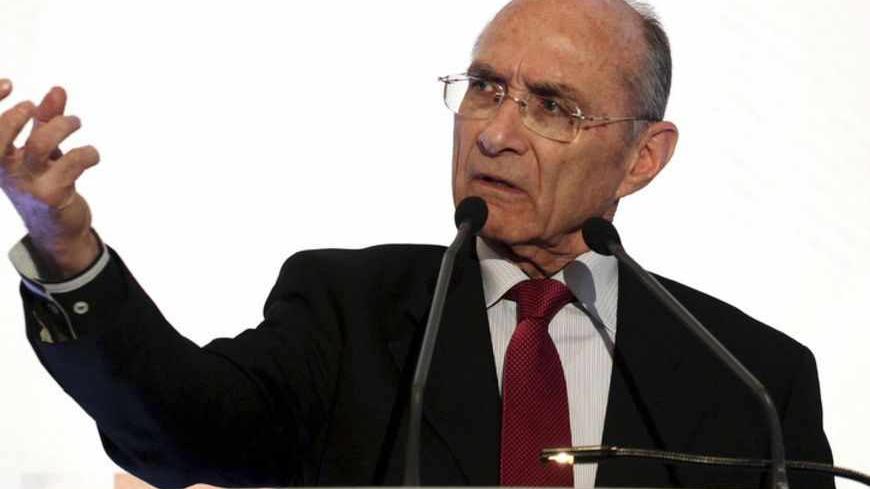 The meeting with Tourism Minister Uzi Landau took place a day after he publicly quoted the well-known maxim of former Foreign Minister Abba Eban, "The '67 borders remind us of the borders of Auschwitz." These words were uttered by Landau at the beginning of a government meeting that took place on Sunday (May 26) and were widely quoted in the news broadcasts.

In his parliamentary office in the Knesset, the Yisrael Beiteinu minister tells Al-Monitor that he chose to cite this maxim of Abba Eban, one of the [former] heads of the Labor movement, in light of recent attempts to jump-start negotiations with the Palestinians, this time in the framework of the World Economic Forum that took place in Jordan at the beginning of the week (May 26). At the forum, Israeli President Shimon Peres called for the immediate resumption of negotiations to reach an agreed-upon solution according to the two-state outline.

Isn't the Holocaust comparison somewhat exaggerated? After all, the president proclaims the vision of two states, and allows us to understand that he and the prime minister are in agreement …

"So he is mistaken! But my argument is not with any specific person.

"The president of the state talks in his own name. After all, he has no authority to speak in the name of the government. I am in the government first and foremost to say these things when it is necessary to say them, and I'm saying it now.

Former Foreign Minister Abba Eban used that expression in 1969. Dozens of years have passed since then …

"That doesn't make these borders less Auschwitz-like. Before '67, they didn't have Katyusha rockets and missiles to the extent owned today by Hezbollah in the north and Hamas in the south that constitute a strategic threat to Israel. One thing must be clear: A Palestinian state is not the solution."

After quoting Abba Eban, Landau quoted the deceased former Egyptian President Anwar Sadat. "When they told him that Israel was proud of the peace it made with Egypt, and that they call it the largest Arab state, his response was, “Egypt is not the largest Arab state. It is the only Arab state. All the rest, are nothing more than tribes with flags. The vast majority of the Arab states are not real nation states.’"

Six years ago, Landau left the Likud and joined former Foreign Minister Avigdor Liberman in the Yisrael Beiteinu party. Landau, son of Etzel underground activist Haim Landau [under the British Mandate of Palestine], who was himself elected as a Knesset member on behalf of the [right-wing] Herut party, left the Likud with a certain sense of lost opportunity and failure. This was because he was not successful in averting former Prime Minister Ariel Sharon's disengagement plan from Gaza. According to Landau, the two-state vision that has risen again must be nipped in the bud immediately.

He feels great urgency. To give his words greater weight, he feels impelled to quote another great statesman, this time former US Secretary of State Henry Kissinger, regarding the Oslo Agreement that Landau sees as the greatest mistake of all. "It was a true strategic error," says Landau, "Kissinger, who was astonished at the Israeli course of action, said that Israel did it out of mental exhaustion. He did not believe that any reasonable leadership could do something like this. Since Oslo, we have paid with more than 1,000 victims who fell because of terror, so it amazes me that people continue to talk about it. …

"All the talk about two states for two peoples, and the attempts to win over hearts and minds to the belief that if we'll only take this road, peace awaits us — all this is populism. It will only bring more terror."

The "hearts and minds" you mention, include a Likud prime minister …

"I am telling you what my position is. When I observe the Middle East after the Arab Spring, I understand the chilling truth of Sadat's words. Look at Iraq — a country falling apart from inside. The Syrians are disintegrating into the smaller nationalities that comprise the country; look at Lebanon, which is internally splintered and torn to pieces, and Libya and Yemen. And the list goes on. But when we get to the Arab Palestinians, who never existed as a nation, that have no history of a state, suddenly everyone talks about a state. And I ask, 'What, have we lost our minds? Now we want to establish a state for this purpose?' We have bitter experience with the Palestinian Authority — we closed a deal with one Authority and now it turns out that it split into two units, to something that is almost a Palestinian state in Gaza and to the Palestinian Authority in Judea and Samaria. President Shimon Peres himself said in the past that the number of agreements signed in the Middle East equals the number of agreements that were violated.

"We must not forget that Abu Mazen is a president who was elected only until January 2009. Since then, every year, his term of office is extended for a simple reason — because if elections were held, he would not be elected. What is his legitimacy?"

Many members of the defense establishment, both past and present, including Shin Bet chiefs and chiefs of staff, support the two-state solution. Are they all wrong?

"I will quote Mr. Peres once again, who said that we should never take the defense system's recommendations as absolute truth. [Former Prime Minister Menachem] Begin bombed the Iraqi reactor against the opinions of all the heads of the service and defense systems [in 1981]. The heads of IDF Intelligence Branch, former chiefs of staff, were the ones who pushed for Israel to voluntarily hand over the Golan Heights and sever Syria from Iran as a necessary condition for coping with the nuclear problem. Does that point to deep thinking? If we had listened to their advice and signed the agreement over the Golan Heights — where would we be today? Evidently under gunplay over [northern town of] Kiryat Shmona or Kfar Blum.

"What is needed is the sharp eye of a statesman who has a deep historical perspective of the geopolitical situation."

"I don't want to turn this argument into a personal one. I merely point out the necessary qualifications needed by the person who makes the decisions. Israel has paid very dearly in the past for the mistakes of its leaders — more than once — and is still paying the price. For example, Oslo [accords] — what price have we paid for that?"

You sit in a government in which there is a majority of supporters for renewal of negotiations on the basis of the two-state concept.

"And what about the other side? I don't see Palestinian President Abu Mazen agreeing to anything. What about that distinguished president, whose doctoral dissertation was based on denial of the Holocaust? On the table he talks about peace, but under the table he prepares the next generation for continued war.

"I think that anyone who talks now about peace that just waits for us around the corner is not serious. He is not realistic. Peace is not founded on dreams, but on reality."

So what should be done?

"The solution is, first of all, to ensure our own security. The second thing is interim agreements without conceding any of the foundations of our security."

What, in essence, are you telling the Palestinians?

"Something simple: 'If you want negotiations, then without preconditions, please.' The state of Israel made a harsh mistake when it created the impression that it is prepared to accept two states for two nations in the famous speech [Prime Minister Benjamin Netanyahu's speech in June 2009 in Bar Ilan University]."

Yet, you are also tourist minister. With a diplomatic outlook such as this, how do you expect to attract many tourists here?

"Did the number of tourists from Egypt rise after we signed the Oslo Agreement? The trips were unidirectional … from here to there.

"I think that the state of Israel should be branded a bit differently. We must emphasize, first and foremost, that Israel is the land of the Jewish-Christian civilization. People must know that Israel is the country of music, of archaeology, and of festivals."

A bit difficult, with all the cries for boycotts …

"When we continue to say about ourselves, ever since Oslo, that we are conquerors, and at the same time that the Palestinians are right, what do you expect? [Former Prime Minister David] Ben Gurion never spoke this way, neither did Begin. Israel is a source of inspiration. There is what to see here. The problem is that in our perception, Eretz Nehederet (What a Wonderful Country) is only a satirical TV program."