City council elections in Iran are important amid the nation's upcoming presidential elections. 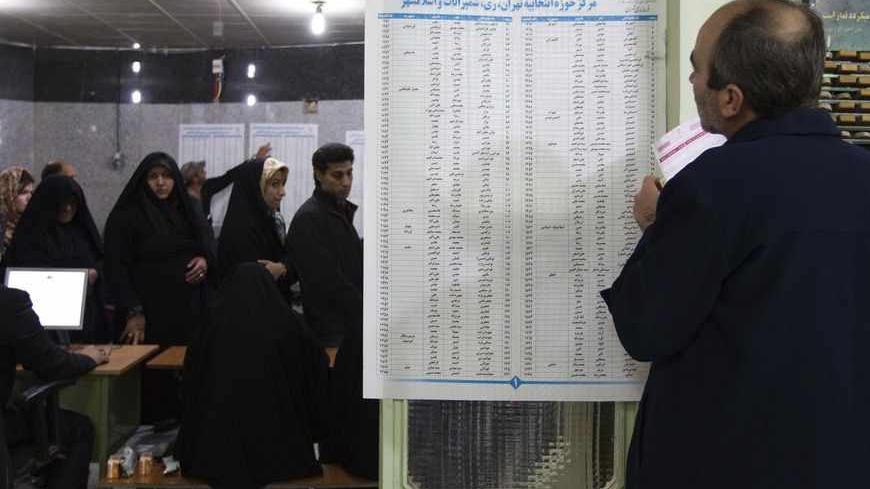 A man fills in his ballot during Iran's parliamentary election at a mosque in southern Tehran, March 2, 2012. - REUTERS/Raheb Homavandi
May 17, 2013

On June 14, Iranians will not only cast their votes for president, but they will also be electing more than 126,000 provincial, city, district, and village council members in cities and villages throughout the country. These elected officials play a key role in planning and managing policies that directly impact the lives of their constituents in each municipality.

Regime officials have deliberately scheduled the city council elections on the same day as the presidential election in order to increase election turnout; this is an outcome that the Islamic Republic greatly desires.

Their hope is that, given the important role played by these councils, citizens may feel obligated to participate in elections and, in turn, they may take part in the presidential election as well.

Contrary to popular belief, the Iranian regime still cares about elections. Since its establishment, the Islamic Republic of Iran has relied on citizen’s votes to demonstrate its legitimacy, both domestically and abroad. Iran has one of the most frequent election cycles in the world, in fact, since 1979, citizens have gone to the polls at least once a year in order to elect parliamentary members, various councils and assembly members, and presidents.

Iranian officials are eager to see a high voter turnout because they believe that, in the eyes of international observers, a large number of voters will show that the people are still behind the regime.

“The exceptional and epic turnout in the June 12 [2009] elections was a great show of trust and hope on the part of the nation, a political earthquake for enemies, and a historical celebration for friends of Iran and the Revolution,” Iran’s supreme leader, Ayatollah Khamenei, declared following the 2009 presidential election.

Regime officials have repeatedly stressed the power of popular elections against foreign threats. In a May 2005 speech, Ayatollah Khamenei elaborated on this point by saying, “People’s presence during election seasons is fundamentally important. Public participation demonstrates national solidarity, which can make us immune against enemy conspiracies.”

In Ayatollah Khamenei’s logic, getting out the maximum number of voters demonstrates that the citizens are generally satisfied with the country’s conditions. Such a showing could reduce domestic and international pressures, and allow the regime to more easily implement its intended policies.

However, the government’s dilemma comes in the form of convincing people to continue to vote when they have been disappointed by the outcome more than a few times. The most striking case comes from the events following the disputed 2009 presidential election and the subsequent crackdown.

This is not the first time that Iranian officials tried to pressure the public to vote by scheduling city council elections on the same day as a national election.

During the 1999 city council elections, the Guardian Council and the Interior Ministry were busy preparing for the third round of the Assembly of Experts elections — a body responsible for electing and, if deemed necessary, impeaching the supreme leader. The decision was made to schedule the dates close together, which resulted in lively public political debates about various Assembly of Experts candidates. The result was a 9% increase in the Assembly of Experts turnout compared with the previous election.

In April 2010, by the order of the supreme leader and parliament’s ratification of Article 3 of the presidential election law, the decision was made to join the dates of the two elections.

Interior Minister Mostafa Mohammad Najar declared his opposition, but to no avail. “The presidential election is a national election and the council elections are local elections. They do not have any topical connection,” Najar said.

At first glance, city council elections may appear far less important than the presidential election, but the city and village council members have a direct, immediate impact on the daily lives of average Iranians.

Also, in less urban areas, tribal and family loyalty plays an indisputable role. Politics aside, many rural citizens will participate in the elections in order to increase their tribal stature, prominence, and clout.

As indicated by Articles 100-106 of the Islamic Republic’s Constitution, a vision for local management of cities had always been envisioned. However, it took until 1996 for the Guardian Council to ratify a detailed law defining the specific roles of the councils. Among many other responsibilities, they have the power to appoint and dismiss mayors, ratify and allocate municipal budgets, and approve development projects.

The first round of city council elections in Iran were held under the reformist presidency of Mohammad Khatami in 1999. These elections saw great levels of public participation and civic engagement and still tend to be viewed as an important opportunity for citizens to play an active part in the management of their municipalities at a local level.

By default, city council elections have also facilitated the political power shift among various factions at the national level. Frustrated by the underperformance of reformists, there was a tremendous amount of voter apathy resulting in a low turnout in the 2003 city council elections. As a result, many reformists were ousted from their positions within city councils and were replaced by conservatives. The newly elected conservative members of Tehran city councils elected Mahmoud Ahmadinejad as the mayor of Tehran in June 2003.

Although not directly supervised by the Guardian Council, these elections are not immune from the vetting process either. The central government would rather see loyal conservative candidates in charge of cities and municipalities as well. Vetted by a parliamentary commission, city council candidates have experienced their own share of disqualifications.

Recent reports have indicated that three prominent reformist city council candidates have been disqualified from the race. According to Hossein Tala, head of the High Elections Oversight Committee for Islamic Tehran Province, City, and Village Councils, prominent reformist figures such as Mohsen Hashemi, son of former President Hashemi Rafsanjani; Masoumeh Ebtekar, Khatami’s head of the Environmental Protection Agency; and Fatemeh Rakei, former member of the parliament, have been disqualified.

In interviews with the Shargh Newspaper, Hashemi and Rakei stated that the reason behind their disqualifications was Items C and D of Article 26 of the Iranian Constitution, “failure to prove commitment to the Supreme Jurist and the Constitution.”

The supervisory council has since said some of the disqualifications were just rumors, but the fates of the reformist candidates are still unknown.

Time will tell if combining the local city councils elections and the presidential election will yield any benefits. Nonetheless, what is certain is that the Islamic Republic will do all it can to ensure a high election turnout in order to prove its legitimacy domestically and abroad.

Saeed Aganji is an Iranian journalist, researcher and former editor-in-chief of the Saba student publication.