Europe and the Politics Of Syrian Oil

The EU lifted a ban on the export of Syrian oil from rebel areas and must figure out how to get hold of the oil, much of which lies under destroyed infrastructure and in areas of active fighting, writes Nasser Chararah. 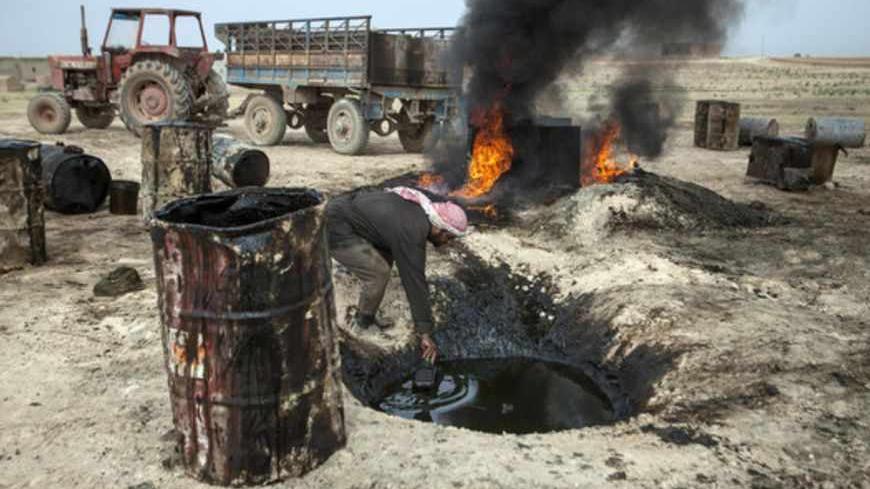 A picture taken on April 15, 2013 shows a Syrian man in the Al Raqqa countryside, who until three months ago was a farmer, pouring crude oil brought from Deir Ezzor province into a pit where it will be distilled as part of the refining process to produce fuel. - Alice Martins/AFP/Getty Images

Last month's European resolution to lift the embargo on supplying oil equipment to and buying oil from the Syrian opposition was a landmark in the Syrian crisis.

For its part, the regime believes that this is a sign of a close relationship between the motives of the internal war in Syria and the future of oil in the country. According to information obtained from independent Syrian sources that are linked to the Syrian oil sector, the implementation of this European resolution faces major obstacles.

Chief among these, according to sources who spoke to Al-Monitor, is the current condition of the Syrian oil fields. This is completely unknown, because the fighting has destroyed infrastructure and a number of wells, and some equipment has been stolen and sold outside Syria.

Therefore, the first requirement for the European countries to buy oil from the opposition is the technical rehabilitation of these fields. This, in turn, requires sending engineering teams to examine their current condition, an adventurous task given the lack of security in these areas.

Second, the supplies and spare parts needed for these fields to operate must be determined.

Third, a field study of the areas containing oil wells must be carried out in order to identify the armed groups controlling the areas and examine the possibility of cooperating with them, especially since many areas (such as Rif al-Hasakah and the north of Raqqa) have still not settled in favor of a particular party. This means that they suffer skirmishes between the regime and its opponents.

The same sources say that the area containing oil fields in Syria is vast and includes Qamishle, Hasakah and Raqqa provinces as well as part of the province of Deir al-Zour. This makes the job of the European technicians there extremely difficult, as that the area is under overlapping control.

The sources add that Syria's Kurds may not agree to export their regions' oil through the Turkish port of Ceyhan. It is important that the Kurds not object, a factor that is required for the success of the European plan to buy Syrian opposition oil.

A large proportion of the Syrian oil fields is located in Kurdish areas, stretching from al-Malikiyah in the east to Afrin in the west along the Syrian-Kurdish border. Therefore, the rehabilitation of the fields as well as oil extraction and exportation through tankers or pipelines to the port of Ceyhan need the cooperation of Syria's Kurds.

The sources told Al-Monitor that another problem arose in European circles regarding the difficulty of implementing their resolution. The fact of the matter is that the cost of rehabilitation is high, raising questions as to who will pay for it, especially considering that the opposition does not have the money.

If the European oil companies that were operating these fields until the outbreak of the Syrian crisis pledged to pay these amounts and repair the subsequent damage, then they would inevitably ask for security guarantees in advance to protect their technicians on the ground during the repair operations. They would also require similar guarantees for the security of the passage lines for the extracted oil to be transported from Syrian territory to the Turkish port of Ceyhan.

These companies will need to reclaim the money they will pay for the oil fields reform and oil extraction. A solution is being considered regarding this requirement, according to which these companies would be given the prerogative to extract oil and deduct part of its price when selling it. In other words, they can deduct the amount they invested in the maintenance of the Syrian fields. This option, however, raises questions, including:

— Which party will receive the price of the Syrian oil sold this way in the absence of the state, which is usually paid for oil extracted from its soil?

— What are the criteria that will determine the quotas to be distributed among the European oil companies and the Syrian opposition parties located in oil field areas?

— Will this force these companies to enter into negotiations with the armed extremist groups, and will this be done with each extremist group separately, according to their level of presence in each area?

It is expected that the implementation of the European resolution to rehabilitate the oil fields and buy oil from the Syrian opposition will lead to a replica of the Libyan oil scene. In other words, this may lead to a solution similar to that adopted by Qatar, whereby it sold Libyan oil before the fall of Gaddafi and exported it from Benghazi, collected its revenue and then distributed its financial proceeds — after deducting its share — to the Libyan armed groups of its choice?

Will Qatar, Turkey or France take the responsibility of collecting the Syrian oil-revenue funds in order to distribute them to the opposition? Analysts say that the involvement of the French in particular and their European partners in the Syrian oil sector, in the name of supporting the opposition, confirms that they want to maintain their share of Syrian oil in the future.

by Murielle KASPRZAK and Joseph SCHMID | AFP | May 26, 2022
END_OF_DOCUMENT_TOKEN_TO_BE_REPLACED