Erdogan Paints Himself Into Corner over Gaza

After his meeting with US President Barack Obama, Turkish Prime Minister Recep Tayyip Erdogan cannot seem to win on Gaza. 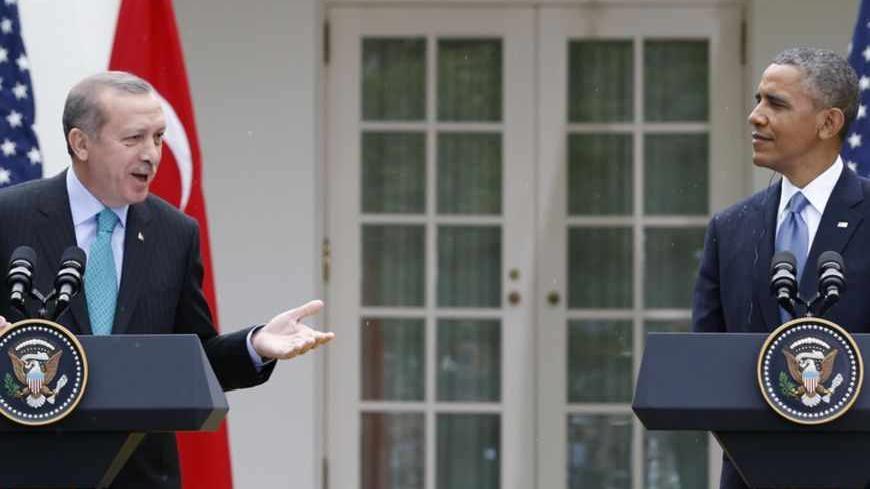 Turkish Prime Minister Recep Tayyip Erdogan — who changed his position on Syria after talks last week with President Barack Obama at the White House and is now talking about supporting a political solution to the crisis — has also apparently fine-tuned his stance on his planned, controversial visit to Gaza, which he now says will take place in June.

Secretary of State John Kerry had angered Ankara in April by suggesting during a visit to Istanbul that Erdogan delay his visit so it would not distract attention from efforts to revive the Middle East peace process. Defiant members of the Erdogan government responded angrily, suggesting it was not up to Kerry to decide when the visit should take place and insisting that it would proceed as scheduled, at the end of May.

Erdogan’s dilemma, however, was that opposition to the visit was not limited to the United States but also included the Palestinian Authority (PA), led by President Mahmoud Abbas, which has been arguing that a Gaza visit would be divisive for the Palestinians given the efforts under way for reconciliation between Hamas and the Fatah-dominated PA.

Judging from remarks by Obama and Erdogan on May 16 during their joint press conference at the White House following nearly four hours of talks, this issue had been a key item on their agenda.

“Given our shared interest in peace, I want to note the Prime Minister’s efforts to normalize relations with Israel. This will benefit both the Turkish and Israeli people and can also help us make progress on a two-state solution, including an independent Palestinian state,” Obama said, skirting mention of the Gaza visit and instead highlighting the positive contribution Turkey could make in the region.

Erdogan for his part was less circumspect when answering a question about the Gaza visit, which he then announced would now be taking place in June. Having already publicly declared in Turkey that he would travel to Gaza in May, the change in the timetable was interpreted by diplomats in Ankara as a way of buying time to let matters unfold in the region. Their assessment ties in with what Erdogan went on to say.

“But it will not be a visit only to Gaza. I will also go to the West Bank. I place a lot of significance on this visit in terms of peace in the Middle East, and this visit in no way means favoring one or the other. I’m hoping that that visit will contribute to unity in Palestine, first of all. This is something that I focus on very much. And I hope that my visit can contribute to that process.”

The postponement of the Gaza trip is also being read as an indication that Erdogan is waiting for the US-brokered Turkish-Israeli reconciliation to mature fully, with the appointment of ambassadors, and for progress in the Egyptian-sponsored talks between Hamas and the PA. Officials from Hamas have, however, been keen to have the visit go ahead. They have been waiting now for months for it to materialize.

Hamas, which is opposed to the current efforts at reviving peace talks, especially if it includes a land-swap clause as recommended by the Arab League, stands obviously to bolster its position by hosting one of the key regional figures at this time.

Erdogan’s sympathies have always clearly rested with Hamas and its leader, Khaled Meshaal, who has been an honored guest in Ankara on more than one occasion. He is nevertheless faced with the possibility of committing a multiple blunder by trundling into Gaza with scant regard for the big picture. It is clear that if mishandled, the visit could harm Turkish-Israeli relations, as well as those between Ankara and the PA, while contributing to undermining the Middle East peace process by emboldening Hamas, not to mention the possibility of sullying the current positive atmosphere between Ankara and Washington.

Erdogan’s “leveling of the playing field” between Hamas and the PA in Washington as he did, as well as his expressed desire to contribute to a peace process that the Islamist Hamas opposes, most likely did not go down well in Gaza. Hamas officials have already announced that they do not wish to see Turkey play a mediating role between themselves and the PA, saying that that position belongs to Egypt.

The Hamas leadership is not, however, in a position to openly criticize Erdogan over his remarks and risk alienating a valued supporter at a critical moment for developments in the region. As for Erdogan, he is not in a position to openly support Hamas’ negative stance on reviving peace talks, especially after what he said in Washington with Obama standing nearby.

It seems therefore that Erdogan may have painted himself into a difficult diplomatic corner over the issue of his visit to Gaza, which, before the talks in Washington, he appeared to have made into a matter of personal honor. He has not given up on the visit, of course, but has raised the stakes for himself by asserting that it will contribute not only to Palestinian reconciliation, but also to Middle East peace.

For Erdogan to have a chance at success on both accounts, however, other things must happen first. Among them, full normalization with Israel is a “sine qua non.” Given this situation, diplomats in Ankara are saying they would not be surprised at the announcement of a further postponement of the Gaza visit, if a political-diplomatic environment conducive to normalization does not evolve in time.

Adding to Erdogan’s headache on this score is the field day the opposition in Turkey is having over the way he changed his position on Syria and his wavering on the Gaza visit. Main opposition Republican People’s Party (CHP) leader Kemal Kilicdaroglu and Nationalist Movement Party (MHP) leader Devlet Bahceli lambasted him in speeches to their parliamentary groups on May 21, accusing him of being at Washington’s beck and call.

“There was no stick and carrot in Washington,” Kilicdaroglu said. “There was only stick and stick.”