Semih Idiz considers the timing and possible consequences of the Turkish prime minister’s visit to Gaza in May. 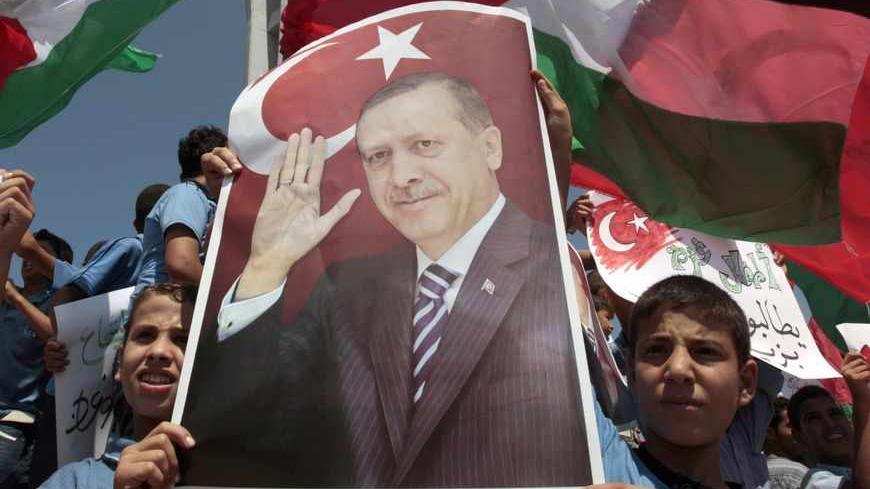 Prime Minister Recep Tayyip Erdogan appears to be caught between a rock and a hard place. He has turned his long awaited but as yet unrealized visit to Gaza more or less into a matter of honor. He announced last week that the visit would finally take place at the end of May. Having declared a date, albeit vaguely, he is now under pressure to ensure the visit does not turn into a fiasco and alienate not just Washington and Israel, but also the Palestinian Authority (PA) and President Mahmoud Abbas.

Erdogan’s advisers are no doubt disturbed that the main objection to his Gaza visit is not coming from Israel — which is strongly opposed to the visit — but from Hamas’ rival Fatah, and the PA.

Azzam al-Ahmed, a member of the Fatah Central Committee and a close adviser to Abbas, was quoted by The Jerusalem Post on April 15, saying the PA believes Erdogan’s visit to the Gaza Strip would deepen Palestinian divisions. “Anyone who visits the Gaza Strip without coordination with the Palestinian Authority supports and deepens the split between the West Bank and Gaza Strip” Ahmed said. He added that Abbas was planning to visit Turkey soon, ostensibly to talk Erdogan out going to Gaza, although this has to be confirmed yet.

What compounds Erdogan’s dilemma is that Turkey’s consul general in Jerusalem, Sakir Torunlar, presented his credentials to Abbas on April 15 as the first fully fledged Turkish ambassador to the PA. Ankara would clearly not like to start off on the wrong foot with the Abbas administration, even if Erdogan and Foreign Minister Ahmet Davutoglu’s Islamist sympathies have always rested with Hamas.

Turkey was, after all, one of the main sponsors of the PA’s successful bid last November for “non-member observer state” status at the UN.  Recalling this fact an Arab diplomatic source in Ankara, speaking to Al-Monitor on condition of anonymity, said: “You can’t push for statehood for an entity and then go and weakening his state from inside.”

Given such sentiments and US pressure to remain on track in the normalization process with Israel, it is incumbent on Erdogan to turn his Gaza visit — if indeed it does go ahead — into some sort of diplomatic success. In doing this he has to also assuage Israel and the US who consider Hamas a terrorist organization — a designation Erdogan rejects, of course.

The answer to all this may be in Washington, where Erdogan is scheduled to have talks with President Barack Obama on May 16. Erdogan’s Gaza visit will take place after these talks, which means the topic will be discussed at those talks. Press reports suggest that Secretary of State John Kerry has been trying to dissuade Erdogan from going to Gaza, but official US statements have not been categorical.

US State Department spokeswoman Victoria Nuland is on record saying that Washington has urged Turkish officials in the past that any contacts they have with Hamas should serve “the greater issue of stability and peace, and that the fundamental underlying tenets of the Quartet Principles be reiterated as the necessary precondition.”

The Quartet Principles require that Hamas recognize Israel’s right to exist, gives up terrorism and accepts previous Israeli-Palestinian agreements. Nuland did not refer to Erdogan or his Gaza visit specifically, but reading between the lines, she appeared to be saying that if this visit is to go ahead, it should serve a useful purpose.

If Erdogan can get a commitment from Hamas to respect the Quartet Principles, this would be a major coup for him, of course. Not only will such a visit have served a useful purpose, it would also dispel any notion that he visited Gaza as an act of defiance.  Needless to say, such a success would also position Turkey in the efforts to enhance stability in the Middle East.

At any rate, the statement from the Prime Ministry in Ankara on March 22, after Erdogan accepted Israel’s apology, specified that Erdogan had also reiterated to Israeli Prime Minister Benjamin Netanyahu — during their ice-breaking phone conversation under the watchful eye of Obama — Turkey’s continued support for a resolution to the Israeli-Palestinian conflict on the basis of a two-state solution

Whether Hamas can be brought nearer to the Quartet Principles by Erdogan remains to be seen. But it is a fact that he has great influence over the Hamas leadership, which in some cases values his support more than the support of Arab leaders. Hamas, however, is also faced with rapidly changing situation in the Middle East since the outbreak of the Arab Spring. Hamas leaders are finding today that they too have to engage in delicate balancing acts, especially after having been forced to leave Damascus.

Hamas needs all the political support it can get and continued backing from Erdogan is indispensable for it.  Hamas leaders are nevertheless increasingly aware that Ankara also has to maintain delicate balances, being a close ally of Washington and a key NATO member. This is why Hamas has been very careful when talking about the US-led efforts for normalized ties between Turkey and Israel.

Referring to this process in Cairo, where he was re-elected on April 1 to head Hamas’ political bureau, Khaled Meshaal was revealingly circumspect. “It does not concern us if Turkey has relations with Israel or not. Yes, we are against ties with Israel, but the Turkish administration continues to stand by Palestine,” Meshaal told a gathering during a conference in the Egyptian capital.

Given the new dynamics in the Middle East and efforts to kick-start the Middle East peace process again, Hamas can not afford to alienate Ankara with strong criticism of efforts to normalize Turkish- Israeli relations. By the same token, Israel has to restrain its response to Erdogan’s plans to visit Gaza, especially since he will not be the first prominent Islamic leader to do so.

There is also the tangible potential for Turkey to be a moderating influence over Hamas, which some Israelis also say should not be squandered. Meanwhile, the Israeli government and the Obama administration are hinting that Turkey is in a position to materially contribute to Gaza’s development, thus alleviating some of the serious poverty in the enclave that plays into the hands of radicals.

In view of all this it would be wrong to automatically place Erdogan’s prospective visit to Gaza in a negative light. But this does not mean Turkey and Erdogan are not faced with a dilemma here since it is the Abbas camp that has to be really convinced of the merits of such a visit at this point in time. Ankara also has to understand the concerns of the PA and be wary of contributing to Palestinian divisions.

This is why the Gaza visit could be postponed to a later date. This may turn out to be diplomatically necessary in order to give time for the rapprochement between Hamas and the PA, and Turkey and Israel, to make some headway and for new hopes for restarting the Middle East peace process to emerge.

That would be a much more propitious time for Erdogan’s Gaza visit, allowing him to start in Tel Aviv, move to Ramallah and then to Gaza City. In the meantime, there are dozens of new ways that Turkey can be contributing to Gaza’s welfare, besides what it's already doing.

Semih İdiz is a contributing writer for Al-Monitor’s Turkey Pulse. A journalist who has been covering diplomacy and foreign-policy issues for major Turkish newspapers for 30 years, his opinion pieces can be followed in the English language Hurriyet Daily News. He can also be read in Taraf.