Why Only Democracy Can Save Egypt 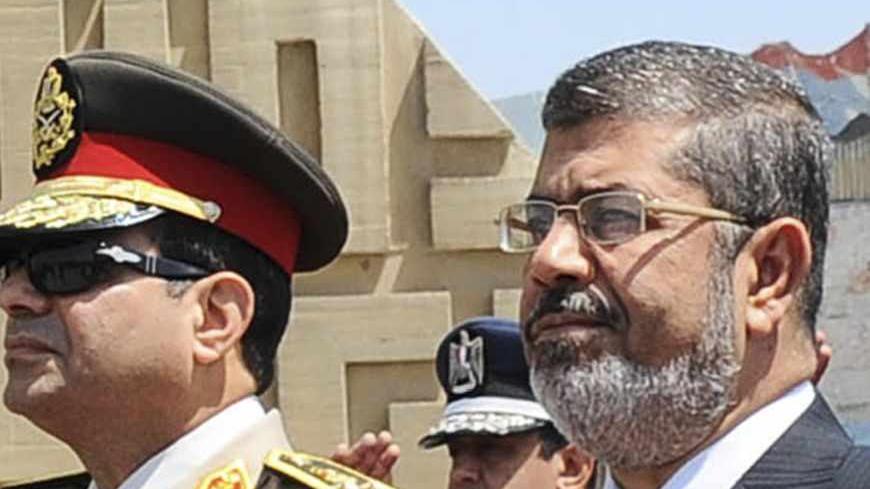 Egyptian President Mohammed Morsi stands with Defense Minister Abdel Fattah El-Sisi after laying a wreath during his visit to the tomb of former President Anwar al-Sadat and the Tomb of the Unknown Soldier during the commemoration of Sinai Liberation Day in Cairo, April 24, 2013. - REUTERS/Egyptian Presidency/Handout

During the army’s Sinai Liberation Day celebrations on April 28, an ensemble of Arab singers stood on stage to receive a standing ovation for their performances. Some in the crowd roared the famous chant “The army and the people are one hand!” Later, army head Gen. Abdel Fattah El-Sisi, came forward to speak as scheduled. El-Sisi embarked on a passionate portrayal of the army and Egypt, and how both will remain strong and defiant, during which he got several ovations.

Suddenly, well-known singer Mohammed Fouad, who had earlier produced an Egyptian flag with the army's emblem, interrupted and emotionally pleaded to El-Sisi, “Please take care of Egypt, sir.” Fouad then began to tear up as someone began to calm him down, and a few other stars on the stage visibly began to tear up as well. The attendance reacted with strong applause to Fouad. While some understandably criticized Fouad claiming he was just acting. However,  at least to me, his emotions seemed largely sincere, and possibly captured those of a lot of people.

The general feeling right now in much of Egypt and for many of the regular and omnipresent non-Islamist faces in punditry is a visibly much more worried sentiment toward the Muslim Brotherhood and President Mohammed Morsi, especially as organized and street opposition seems fainter. For some, they are even terrified. In their view, the Brotherhood and Morsi are not (or no longer) just a political party with whom they will mainly battle over health care and economic policy and such, and engage in democratic transfers of power. Rather, they see the current rulers as determined to take over Egypt, in a manner even worse than that of the former regime and using any means possible, including potentially rigging the elections if they must. The Brotherhood, the claims go, surely has a plan to turn Egypt into a Sunni version of Iran, a terrifying thought to many. More immediately, Morsi and the Brotherhood are seen as mismanaging the country, particularly the economy. While some of these claims at times seem somewhat hyperbolic, assumptive or premature, or contain inaccuracies, others are not entirely without at least some root cause, and increasingly so as of late.

Given the increasingly lackluster performance of the Egyptian opposition, the hopes of many turned toward the army and its quasi-enigmatic leader Abdel Fattah El-Sisi. El-Sisi’s public image has gradually changed from being seen months ago as a potential Brotherhood ally to now being seen more as an independent military man, one who is closer to the traditional nationalist school that has long dominated the military. Between heated media commentary and even a number of citizens signing legal proxies to the army asking it to take over power over the past few months, significant public pressure seemed to be mounting on the army to just “do something” about the perceived threat of the Brotherhood. That something, for many, was to actually take over power once again.

The army leadership’s official position was perhaps thus far best articulated in a statement in Dec. 8, 2012, made during the constitutional crisis. The military was encouraging dialogue between political factions (even tried to host a large gathering during the constitutional crisis in which all political sides were due to attend, which mysteriously got canceled) but said it also “would not allow” the country to descend into “a dark tunnel” if it ever came to it. With El-Sisi becoming increasingly outspoken and visible as of late, and with Morsi and the Brotherhood’s management of the country growing more controversial than ever, some assumed (or hoped) a moment of intervention was perhaps coming soon.

But the proponents of a swift army move were in for a shock. In a surprise public army inspection and drill a week ago, uncharacteristically open to media and public figures, El-Sisi spoke more directly than many would have expected. “No one will oust anyone,” El-Sisi bluntly stated to the sure disappointment of many. “… There has to be a way for us all to reach an understanding. The alternative is very dangerous,” continued El-Sisi. The army chief then said:  “… to everyone who says the army should take to the streets, [ … ] if that happened, then that’s it. That’s it. You can talk [only ever again] about Egypt after 30 or 40 years.”

He later said that “no one should think that the solution is with the army.” El-Sisi then stated that “standing for 10 to 15 hours in front of the ballot boxes” is better than ”destroying the country.” He also spoke about the necessity of guaranteeing the credibility of the upcoming elections, and that the army will be providing security to the upcoming elections, another indication of preferring the political process to keep moving forward. In another catchphrase of the day, El-Sisi also said: “… This army is a fire. Do not play against it, and do not play with it.” He also dismissed that this overall position comes from external or regional political pressures, but that it was all based on what was seen as the higher interest of the Egyptian state and its security. Throughout the remainder of the short speech, the same message kept being directly and bluntly reiterated: the political process must continue, change can be made through democracy, the army should be kept out of political conflicts.

The fact is: He’s right, and the new army leadership has largely charted a wiser course, something some of those supporting the idea of a swift military intervention may not easily agree with. For example, unlike Mubarak and his regime, Morsi and the Brotherhood came to power in free and democratic elections. Behind much, but not all, of that victory was a real and large dedicated popular base that also includes quite a fiery subset, making long and widespread upheaval in the event of a theoretical Morsi ouster very possible, and raising the subsequent potential of a necessary rebirth of an iron-fisted state that few would approve of.

Then, assuming the army does take over power and conducts elections anytime after, wouldn’t Islamists — including the Brotherhood — possibly just make a comeback to power, perhaps an even more fierce one? After all, how would anyone just expect them to disappear? Further, the army moving to take over power (or expanding its political role) also opens the possibility of internal factional schisms over ideological and political positions, and raises the question of what would happen if a more ideologically conservative leadership ever came to power in the military. Then, there is the economy, which would likely tank further from shattered investor confidence stemming from such local political upheaval, and for a longer period. The military in that scenario, which remains the country’s most popular institution and is thus capable of being some backbone of stability in such a tumultuous national environment, would also likely find itself forced to take very unpopular political and economic decisions that would deeply harm such a popularity, as the transitional period indicated. The troubling examples of Pakistan and Algeria surely come to mind in any such debate.

Whether the army is clearly repositioning itself as a distant watchdog over the political process or is just trying to further get out of politics is something that is still a bit premature to tell. But, and as things stand, the only thing that could truly save Egypt’s democracy from the excesses and misconduct of any one side has to be Egypt’s democracy itself. The Brotherhood must reform and usher in a more inclusive democracy. The opposition’s only true chance is themselves, and their abilities to create policy alternatives and to better reach out to voters to peacefully take over power through elections must be their primary weapons. The “free” media must do its role to objectively enlighten and inform citizens. Egypt needs to move forward to a growing democracy, no matter how elusive this increasingly seems now.

Bassem Sabry is a writer and Egyptian blogger who covers the region on An Arab Citizen. On Twitter: @Bassem_Sabry