A new draft law in Algeria is to bring the country’s religious institutions under the aegis of a single legal body. 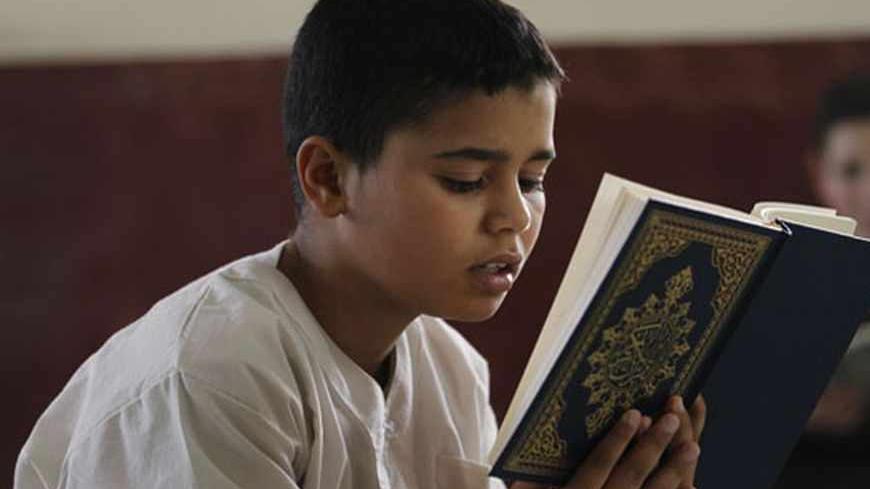 A pupil reads and learns the Quran at Zaouia Ait Koufi in Tizi Ouzou, east of Algiers, during the holy month of Ramadan, Aug. 8, 2012. - REUTERS/Louafi Larbi

From now on, religious associations — most importantly those aiming to take the Algerian people back to the early centuries of Islam and bring them closer to traditionalist and jihadist movements — will be mapped out by a legal system, which has been explicitly prepared.

A draft law governing the mode of operation of these religious associations will be soon submitted to the government office for a final review, before being passed to parliament. This was confirmed by the Minister of Interior and Local Authorities Daho Ould Kablia, before the representatives of the people.

This draft law will also deal with non-Muslim religious associations, which suggests that the authorities have been making earnest efforts to address this issue.

“A draft law regarding religious associations and the provisions thereof has been issued pending submission to the government,” said Ould Kablia.

The draft law is designed to regulate the establishment, operation and organization of religious associations in the country, where the majority of the population is Muslim. Islam is also the religion of the state and is followed by 98% to 99% of the Algerian population.

Even for Christians in Algeria, the draft law is seen from a positive angle because it does not constitute a breach of freedom of worship. According to Mustafa Krireche, president of the Protestant Church of Algeria in Tizi-Ouzou (Kabylia): “This is a good initiative to manage religious activities. We have been waiting for a long time for the enactment of such a law to keep things clear. We practice our religion according to the rules and we support the principle that each religious community has its own association,” he told Al-Monitor.

Several meetings had been held at the government's general secretariat before the draft was formulated. Representatives of the government sectors have taken part in the debate on the law’s articles and contributed to its enrichment. Algeria is the first country in the Maghreb and North Africa to recognize the chaos resulting from using religion for political purposes.

Indeed, a guerrilla group that was based around Larbaa Beni Moussa, south of Algiers, sowed discord during the period stretching from 1982 to 1987. This was the group of Mustafa Bouyali, who wanted to impose early Islamic traditions on the Algerian people which did not commensurate with local cultural values.

This first outburst of violence opened the floodgates for terrorism in the country. The control of religious control has become a necessity, which many deem astute.

“Religion is actually the relationship between people and God. Nobody has exclusive rights in this regard. Unfortunately, there are many organizations that try to make religion their business, and this fact is not limited to our country alone. Thus, competent authorities ought to take action to this effect so as to avoid skids and any adverse effects on future generations,” said Mouloud Arkoub, a university professor, speaking to Al-Monitor.

Therefore, associations of mosques, Quranic schools and Islamic as well as non-Muslim associations will be under the authority of a legal entity, which would be in charge of the legal affairs for the formation of religious associations.

In Algeria, religious associations were approved on the basis of law 90/31 of the 1990s regarding associations, whose provisions were repealed under the 2012 law. According to the Department of Religious Affairs, the number of religious associations amounts to 15,790. In this North African country, the freedom of worship is guaranteed and animosity between different communities has no place in the traditional values of local people.