'Do Saudis Really Hate the US?'

Fahad Nazer, a Saudi citizen living in the United States, shares the anxiety he felt when the media reported that a Saudi youth had been questioned in the Boston marathon bombing. 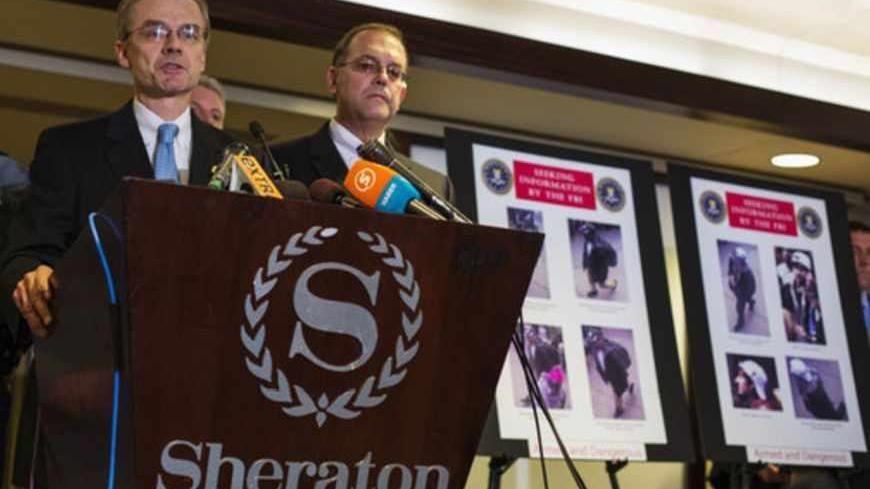 Special Agent in Charge of the FBI's Boston Field Office Richard DesLauriers (L) speaks as he releases images of suspects in the two explosions during the Boston Marathon, at a news conference in Boston, April 18, 2013. - REUTERS/Lucas Jackson
Fahad Nazer
@@fanazer
April 25, 2013

The hours following the terrorist attacks in Boston last week were nerve-racking for the thousands of Saudis currently living in the United States.

Like everyone else, we were horrified to see the images of innocent Americans running for their lives in the wake of those cowardly acts, which targeted them when they least expected it. However, as news spread that a Saudi youth had been “detained” for questioning and was considered a “person of interest,” many of us were suddenly filled with a sense of dread and impending doom. We quickly began to wonder whether our worst nightmare had become a reality; again. Did Saudi terrorists attack the United States a second time and shatter the sense of normalcy that Americans had been desperately trying to regain since the attacks of Sept. 11, 2001?

As a terrorism analyst, I am accustomed to trying to make sense of unspeakable acts of violence and seemingly incomprehensible levels of hatred. But highlighting the different strategies used  by Ansar al-Sharia in Yemen and al-Nusra Front in Syria — both affiliates of al-Qaeda — is one thing. Explaining why 15 of my countrymen flew thousands of miles to kill thousands of civilians about whom they knew nothing — committing suicide in the process — was something different altogether.

Within hours of the Boston attacks, I began preparing myself for an all-too-familiar scenario ever since that fateful Tuesday morning in 2001: Although no one had ever phrased it in those exact words, countless Americans’ eyes have told me what they really wanted to ask me as soon as they learned that I was a Saudi who studied terrorism for a living:

“Do Saudis really hate us?”

While it’s perfectly understandable why many Americans think that is practically a rhetorical question, many facts seem to indicate otherwise.

For starters, it is estimated that there are some 71,000 Saudi students studying at various colleges and universities across the United States at this very moment. It is reasonable to assume that over the past 50 years — which is roughly when Saudis began coming to the US for their education — hundreds of thousands of Saudis have lived in the US for an extended period of time. Thousands of others have come for tourism or medical treatment. To provide some context, of the 110,000 Saudis who applied for a US visa in 2011, only 26% were students.

Members of the Saudi Student Organization at the University of Evansville in Indiana express their condolences to the victims of the Boston bombing.

The overwhelming majority of Saudis who have visited or lived in the US have not committed any crimes or acts of violence and many, in fact, speak fondly of their time in the States. They rave about the kindness of the American family that hosted them, or the university professor who inspired them or the neighbor who learned a few phrases of Arabic just to make them feel at home. An increasing number of Saudis also praise the high premium Americans put on a strong work ethic, ingenuity, equality of opportunity, and their religious and ethnic diversity.

The 15 terrorists who took part in the 9/11 attacks do not represent a broad sampling of Saudis by any stretch. In addition to inflicting unbearable pain and suffering on thousands of Americans, they also brought shame to thousands of Saudis who consider the US their second home, and to millions of their countrymen back in the Kingdom.

Nevertheless, it would be inaccurate to say that no Saudis harbor ill will toward the United States. And that’s where things get complicated.

Those of us who know the Middle East are familiar with a dominant narrative that strongly influences the political socialization process that many — though not all — Arabs undergo across much of the region. It portrays the United States as a violent empire founded on the remains of native Americans and with the sweat and blood of African slaves. It also characterizes the US as the main benefactor of Israel, which stole the land from Palestinians, expelled them from their homes and has subjugated them ever since. It is this element in particular that colors how many Arabs — not just Saudis — see the United States.

This line of thinking has been modified recently, and now maintains that the US took the lead in a global war against Muslims when it attacked Afghanistan and Iraq. If that was not enough, youths are led to believe that the US also props up their oppressive regimes, which are beholden to Washington and over whom it has complete control.

Successive generations of Arabs have been inculcated with this narrative through the media, various social circles, literature, music, movies and even schools. If it was not part of the official curriculum, teachers often took it upon themselves to let the students in on the ugly "truth" about America. Ironically, this disposition is not as deeply entrenched in Saudi Arabia as it is in places like Egypt, Jordan and the Palestinian territories.

Although propagated initially by secular-leaning Arab nationalists, it was not long before Islamists tried to claim this perspective as their own. While moderate Islamists stressed that a revival of the Islam of the “forefathers” and the rejection of Western institutions and values was the only way to salvation, militant Islamists, including al-Qaeda spearheaded a demonization campaign against the US and made it compelling by convincing scores of largely uneducated and alienated youths that not only is there a way to transcend their daily indignities, it also happens to be the ultimate act of religious devotion: Destroy the United States before it destroys Muslims everywhere.

Incidentally, a slightly modified variant of this outlook has also left an inedible imprint on political discourse in Muslim-majority countries like Pakistan and Afghanistan.

Which brings us to another point: The continuing violence in places like Pakistan, Iraq,  Afghanistan, Syria, Libya and even Egypt and the relative calm of Saudi Arabia seem to suggest that, at the very least, Saudis are not necessarily more prone than other Arabs or Muslims to commit acts of violence or terrorism.

On the other hand, the relatively few Saudis who do, seem to prefer to wage their “jihad” outside the kingdom. We all know that 15 out of the 19 hijackers on 9/11 were Saudis. It is also well-documented that a number of radicalized Saudis went to Afghanistan to fight the Soviets, as well as to Iraq to fight the Americans and are now joining Islamist factions within the Syrian opposition to fight the killing machine of Bashar al-Assad.

So what have Saudi authorities done to reduce the likelihood that their citizens would once again take part in terrorism? Quite a bit, actually.

First, they have arrested hundreds of people suspected of having ties to terrorist groups or acts and suspended thousands of schoolteachers and imams who espoused militant views. They also appear to have revised their school curriculum, which contained some materials that may have contributed to militancy among some Saudi youths.

For his part, King Abdullah hosted several interfaith meetings and even funded  a center in Vienna dedicated to promoting peaceful coexistence between the adherents of different faiths. The king even met Pope Benedict XVI in 2007.

It is also worth noting that the Saudis shut down some charitable organizations that engaged in questionable activities in the past and put in place strict controls to prevent the financing of terrorist activities and organizations. They used all forms of media to inoculate Saudis against al-Qaeda and its narrative and established rehabilitation centers aimed at re-educating Saudis who have “lost their path.” Religious authorities have also enjoined youths not to be "deceived" and not to join violent conflicts anywhere.

Although Saudi authorities continue to thwart terrorist attacks and break up terrorist cells inside the kingdom, support for al-Qaeda in the kingdom seems to be very low.

There is little doubt that the thousands of Saudis currently in the United States all breathed a collective sigh of relief when US officials investigating the Boston attacks announced that the Saudi man in question was not considered a “suspect,” as some news outlets had initially reported. Although some Saudis on Twitter and in Internet chat rooms expressed their dismay that the alleged perpetrators were of Chechen descent — at  least one of whom seemed to hold militant, Islamist views — they still could not help but think of how infinitely worse it would have been had the suspects been Saudis.

For now, and unless new information implicates other Saudis of being involved in the plot, I for one will ready myself to answer a question I am certain to be asked by Saudis the next time I visit the kingdom, especially given the fact that some fringe elements in the US continue to insist that Saudis were behind the attacks:

“Do Americans still hate us?”

Fahad Nazer is a terrorism analyst based in Washington, D.C. His writing has appeared in the International Herald Tribune, Yaleglobal Online and The Daily Star (Lebanon), and was recently featured on the website of the Council on Foreign Relations.