Sunday in the Persian Kitchen With Chef Najmieh Batmanglij

At a time of growing tension between the United States and Iran, Persian cuisine can be a bridge between cultures, writes Barbara Slavin. 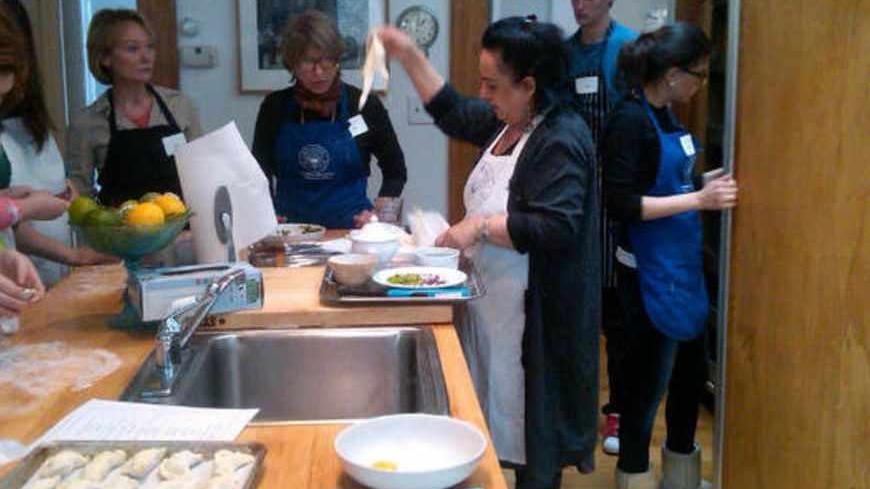 “Rose petals are my signature,” declares Najmieh Batmanglij as she instructs a young aide to garnish a tray of baklava with bits of dried flowers and ground pistachio nuts.

Batmanglij, the Julia Child of Persian cooking, is spending a rainy Easter Sunday in her capacious Georgetown kitchen teaching a dozen Americans the secrets of a cuisine that goes back 4,000 years and is one of the few things that binds Iranians inside and outside their native land.

The menu for this Sunday lunch during the season of Nowruz, or Persian New Year, is mouthwatering. It includes osh-e reshteh, a thick herb and bean soup with long noodles that “bring good luck for the new year,” Batmangli says. The class will also help her make sanbuseh — puff pastries filled with ground lamb, onions and garlic and dusted with confectioner’s sugar, ground pistachios and the cook’s beloved rose petals.

Also on the menu: chicken kebabs that have been marinated for three days before grilling and are served on a bed of flat lavash bread with tomato and cucumber salad, fresh basil and yogurt mixed with Persian shallots and garlic. This is followed by kuk-ye sabzi, a slow-cooked omelet filled with chopped green herbs that are also a symbol of Nowruz. The main course is pomegranate-infused leg of lamb roasted at low temperature for hours. It is served with baqala polow — basmati rice cooked in water flavored with turmeric, cinnamon, saffron, cardamom and rose water and mixed with fava beans and heaps of chopped fresh dill. The finale: Batmangli’s baklava and tea mixed with orange blossom water.

Najmieh Batmanglij demonstrates as the class looks on.

Batmangli shows the class how to make sure that the rice doesn’t break or become sticky: It is tossed, not stirred, with the dill and then re-steamed in a pot whose lid is swathed in a dish towel. Saffron mixed with a little rose water is liberally sprinkled over most of the dishes.

“I share all my secrets,” an effusive Batmangli tells her pupils, whom she embraces one by one before beginning the class. Americans, she says, are growing bored with Chinese, Japanese and other too-familiar foreign cuisines.

“Middle Eastern food is in,” she says — and Persian food, in particular.

As a child growing up in north Tehran before the 1979 revolution, Batmangli was banished from the kitchen.

“I always loved cooking,” she told Al-Monitor, “but my mother didn’t allow me in the kitchen. She said, ‘you go to college and you can cook later.’”

Returning to Iran armed with a masters’ degree in education, Batmangli said she showed her mother her certificate. “She said, ‘Now you can cook!’ ”

And cook she does, collecting recipes from different parts of Iran, including Shiraz, where her mother was born — which appears to account for Batmangli’s love of rose petals. She also finds inspiration in Persian history and literature. Persian food, she notes, has inspired artists and poets for centuries, from the Thousand and One Nights to the works of Rumi and Omar Khayyam.

“Rumi taught cooking,” she tells the class, referring to the 13th-century poet and Sufi mystic still beloved from Turkey through India and Central Asia. “He talked to the chickpeas in the soup.”

Ingredients that were once hard to find in the United States can be acquired now in Iranian stores in the suburbs of major cities or on the Internet. They include sour-grape syrup, pomegranate syrup and kashk — the fermented buttermilk which is a key ingredient in Batmangli’s noodle soup.

Batmangli’s books — a new edition of Food of Life: Ancient Persian and Modern Iranian Cooking and Ceremonies has just been published — are also popular in Iran. When I asked a friend in Tehran a few years ago for a recipe for fesenjan, a popular stew cooked with pomegranate paste and ground walnuts, she gave me a page from Batmangli’s 1992 edition.

Najmieh Batmanglij poses with Food of Life and the author.

In the United States for more than three decades, Batmangli is especially gratified when the children of Iranian immigrants come to her to learn how to cook their ancestral cuisine.

“Be the boss!” she admonishes Karim Sadjadpour, a noted Iranian American analyst in Washington who is attending class with several members of his family. Sadjadpour, it seems, was too tentative in mixing the filling for the sanbuseh.

At a time of growing tension between the United States and Iran over its nuclear program and regional ambitions, Persian cooking is an apolitical bridge between cultures and a source of pride for all Iranians.

“Food can be a way of diplomacy between nations,” comments Sadjadpour’s father Kamal, a neurologist who has been in the United States since the late 1950s.

For Batmanglij, whom this author met during another moment of cultural diplomacy — the US tour of the Cyrus Cylinder, a 26-century-old artifact celebrating religious liberty — cooking is more than a profession. It is her mission.

“When you get older, you have to teach people what you know,” she says. “It is your duty to be a mentor.”