Former IDF spokesperson and Knesset member Nachman Shai explains, in an interview with Mazal Mualem, why Israel fails again and again in the media-diplomacy battlefield. 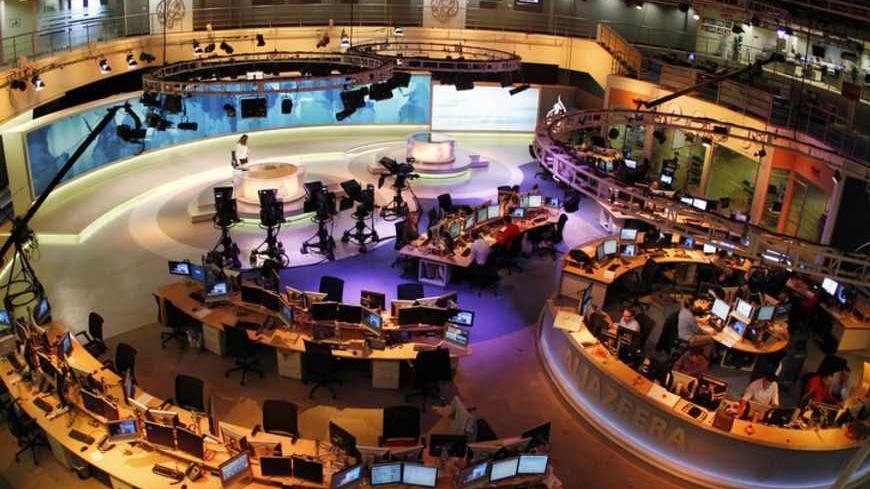 A general view shows the newsroom at the headquarters of the Qatar-based Al Jazeera English-language channel in Doha, Feb. 7, 2011. - REUTERS/ Fadi Al-Assaad

This is the conclusion that Knesset member Nachman Shai (Labor party) presents in his new book, Media War Reaching for Hearts and Minds [in Hebrew]. His book deals with the centrality and importance of the public diplomacy war that is being waged between the terrorist organizations and guerrilla groups, and democratic countries. Shai reviews the key events in which the public diplomacy war between Israel and the Palestinians was manifested, including the affair involving the child Muhammed al-Dura, the Marmara flotilla raid and more.

Shai’s experience in the interfaces between army, media and diplomacy is the result of 40 years of dealing with these spheres. Shai served as military journalist, media advisor, spokesman for the Israeli embassy in Washington, commander of the Israel Army Radio station and IDF spokesman in the First Gulf War. (It was in that war that he earned the nickname of the “National Calmer,” by virtue of the serene tone he adopted in calming the Israelis who sat up close to their radios in sealed rooms.) In recent years, Shai served as Knesset member for the Kadima party, and afterward he moved to the Labor party.

Can the “public diplomacy arena,” as you call it in your book, really decide the outcome of wars?

“I claim that in recent wars, the winning side is the one that succeeds in combining military operations with diplomatic and media strategies. The wars of recent years — between states and terrorist organizations — are ongoing wars, what we call ‘low intensity.' It is a new era of public diplomacy, and the event that got us involved in it was the Twin Towers [9/11] catastrophe. Following that, the United States understood that it must win also on the public diplomacy level, opposite the Islamist wave, both in the traditional media and on the social networks.''

And what about Israel?

“Here, too, the wars are asymmetrical. No longer ‘state vs. state,’ but ‘state vs. terrorist organizations,’ Israel vs. Hezbollah and Hamas. Until recently, when a war would break out, you would set up a media center and connect all the relevant sources to it. At the end of the war, everything would be dismantled. Now, the conflict is with the Palestinians and therefore the media-diplomatic response has to be provided all the time.”

So where did we go wrong?

“One of our first and most severe mistakes was surrounding the death of the child Muhammed al-Dura from a rifle bullet at the beginning of the second Intifada, on September 2000, which caused us great damage. It was a unique case, in which the killing itself was filmed and disseminated on the media. The IDF was viewed as unprepared, it had no answers, there was confusion and tremendous international media pressure. IDF Chief of Operations, Maj. Gen. Giora Eiland, convened a press conference under pressure and took responsibility for the incident. Later on, he regretted it.”

Nachman Shai adds, “The al-Dura case fell on us like a bomb. If we had been properly prepared and our responses had been correct, most of the damage in the international arena would have been averted.''

Ten days after the death of Muhammed al-Dura, the "lynch" took place in Ramallah. Two reserve soldiers who entered the Palestinian city by mistake were attacked and murdered by the raging mob. In this incident as well, Nachman Shai argues, “We did not conduct our public diplomacy properly and did not know how to maximize the harm done to us, in the public opinion war for hearts and minds.”

According to Shai, “The result was that we experienced a severe incident and also were reprimanded by the world, because our military response was too severe and included attacking airplanes. And even when you already attack, you have to conduct operations that cameras won’t catch. That is called ‘small-footprint operations.’ In the Pillar of Defense operation, for example, the dose of air strikes was correct. On the other hand, Hamas achieved victory by launching rockets to Tel Aviv and Jerusalem for the first time, and that is a tremendous diplomacy achievement.”

And after all that experience we amassed in the intifada, we made every possible mistake in the Marmara flotilla raid.

“We also lost out in this story, which was a formative event. We were dragged into an intentional physical confrontation of soldiers against those who presented themselves as ‘civilian peace activists’ and that’s what the world saw. It was a kind of ‘diplomatic attack’: low intensity against high intensity. In any event it was difficult to explain to international public opinion the interception of the ‘humanitarian’ flotilla, on the background of the ongoing blockade of Gaza. Then, the violent resistance on the boat made it impossible. The IDF’s media plan to prevent foreign television teams from broadcasting from the ship collapsed, and pictures of soldiers versus civilians were disseminated all over the world without control. Our public relations response was late and limited. The state comptroller determined that we must create a comprehensive emergency plan for renewing our international diplomacy alignment.”

How do we do that?

“The issue of wars in the diplomatic-public arena is that they don’t need a lot of resources. Here, just this week we were on alert for a cyberattack on Israel. You take a few kids who are hackers and you can cause tremendous damage and paralyze a country. You don’t need a defense budget of NIS 60 billion [about $16-17 billion] for that. The terrorist organizations discovered that they can harm us without killing 100 citizens, because terror does not encourage sympathy.”

And here we come to another fiasco — recognition of Palestine as an observer state in the UN.

“This failure came about because we did not correctly read the moves taken by the other side; we didn’t understand that they have started to adopt terms of the soft power concept, in other words a diplomatic, legal and economic conflict. They go to international courts, they lead an economic boycott and appeal to the UN — instead of blowing up buses in the heart of Israel and arousing antagonism. They changed their approach, but we did not read between the lines. We were sleeping on the watch.”

So what are your recommendations?

“Some of them have been implemented already. The IDF has a Center for Consciousness Operations that was established under former Chief of Staff Moshe (Bogie) Ya’alon [currently defense minister], a man who understands the importance of the diplomatic arena. Now, as defense minister, I am convinced that he will deal with this issue a lot.

“A public diplomacy apparatus must be established that will be subordinate to one of the deputy prime ministers.

“I propose to establish an Israeli broadcast system in Arabic and English for our region. A kind of Al-Jazeera. I want these broadcasts to be viewed also in Lebanon, Syria and Saudi Arabia. Setting up a station likes this, costs a lot less than one F-16 [fighter jet].

“I propose to deploy throughout the world, a configuration of ‘public diplomacy cells’ — meaning hundreds of thousands of people, Jewish and non-Jewish supporters of Israel, who will disseminate information in every corner of the globe.”

In summary, Shai emphasizes, “No longer is the conflict ‘government vs. government,’ and President Barack Obama demonstrated this perfectly during his visit to Israel, when he spoke to the public above the heads of the leaders. That is what we must do — talk to the public in the world, by every means possible. This, of course, together with military steps.”