Iran is not giving up on its ties with Hamas, but is looking for alternatives to maintain its leverage in Palestinian affairs, writes Adnan Abu Amer. 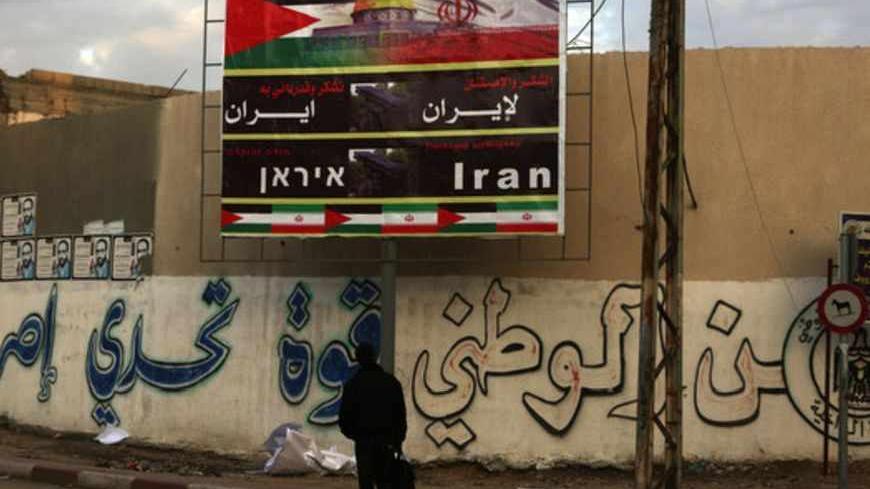 A Palestinian looks at a billboard thanking Iran in Gaza City on Nov. 27, 2012. - PATRICK BAZ/AFP/Getty Images

For the first time in the history of its foreign diplomacy, Iran has openly declared that it is materially supporting a Palestinian armed force fighting Israel. Iran portrayed itself as being responsible for Hamas’ rockets that were fired at Tel Aviv and Jerusalem during the latest Gaza war in November 2012.

This is a significant shift from its previous policy of denying military support to its allies in the region for fear that the world would accuse it of supporting terrorism. This time, however, Iran was keen to claim that it was providing military support for Hamas and considered the outcome of the war an “Iranian victory.”

So what happened? Why did Iran admit that it was giving material support to Hamas? Does it mean that Iran’s influence in the Palestinian sphere is rising after many had thought it had declined?

There is no doubt that the reason Iran admitted providing Fajr-5 rockets to Hamas and Islamic Jihad was to rectify its eroding popularity among the Palestinians, and a desperate attempt to reverse its deteriorating reputation among Arabs. Iran also wants Hamas and Islamic Jihad to give something in return for that support. If Israel attacks it, Iran wants the two groups to engage its enemy and open up additional fronts, thus easing the military pressure on the “mother country.”

Some within Hamas do not wish to highlight their disagreement with Iran, at least until the kind of support that Hamas will get from its new allies — Egypt, Turkey and Qatar — becomes clearer. This is especially so considering that Tehran gives to Hamas much more than other countries, particularly in military matters. The behavior of Hamas’ leaders may be considered a "distribution of roles" tactic among its regional friends as much as a "disagreement with a stay of execution" with Iran.

Moreover, the balance of power within Hamas, particularly between the political and military wings, may give the latter influence in maintaining some kind of relationship with Iran due to the armament and logistical support that Iran provides. A source revealed to Al-Monitor that some in the military wing said in closed meetings, “Only if Doha provides us with ‘Qatar-5’ rockets to take the place of the Fajr-5 rockets can we fully consider breaking our relationship with Tehran.”

Queries should be raised on how Hamas will be able to procure arms if it severs ties with Iran, even though such a discussion would involve a lot of speculation due to the absolute secrecy, for obvious reasons, surrounding the armament file.

If we review Hamas’ declarations during the last war, we will notice that the party never stated that Iranian Fajr-5 rockets struck Israel. Rather, Hamas said that the locally-produced M-75 rockets succeeded in penetrating Israeli airspace.

Such declarations may have been only reporting the fact that Hamas succeeded in manufacturing effective weapons to fight Israel, weapons that are more sophisticated than the Qassam rockets and primitive mortar shells — or it may have been an attempt to demonstrate that Hamas has an alternative to Iranian weapons.

Hamas has been trying to procure weapons from new sources, in particular Libya, after the fall of Moammar Gadhafi. Israel has previously highlighted the existence of a weapons-supply route for Hamas that involves Somalia, Sudan, Yemen and the Sinai Peninsula. Hamas is indeed seeking to multiply its arms sources in the possible case that its leadership decides to break with Iran.

The lukewarm Iran-Hamas relationship may mean that their alliance will eventually degrade to that of a normal status between two friendly countries. The relationship could fluctuate either way, depending on two important factors: first, how the Syrian revolution develops and whether extensive Iranian involvement in suppressing that revolution is revealed, and second, how close Hamas becomes to the Arab world, specifically the Gulf states, which are demanding that Hamas move away from Iran to get closer to them. But Iran has not yet given up on its Hamas ties, as it feels that nothing can compensate for them.

Leaks from private meetings within Hamas to Al-Monitor suggest that Iran remains committed to its relations with Hamas even if the latter chooses to neglect that relationship. Iran believes that if it cuts its ties with Hamas, it will leave Iran with the unattractive image of a Shiite state with Persian nationalism, whose slogans of “resistance” and “support for Palestine” are only a veil to hide its mistakes and sins in the Arab world.

The Hamas government in Gaza suffered when Iran delayed sending it its regular stipend, established over years. That may encourage Hamas to search for alternative sources of funding, including the rich Arab countries such as Qatar and Saudi Arabia, but those require that Hamas change its stances so that they can avoid unnecessary diplomatic crises with Washington.

Hamas may also seek funding from the world’s Islamic charities. But that may not be enough to cover the movement’s regular expenses. In managing the Gaza Strip, Hamas' normal government expenditures are several times the movement’s organizational expenditures.

A third funding option that Hamas may resort to as an alternative to Iran involves reducing government expenditures. Some are calling for an austerity plan regarding the salaries of senior government employees, even though the Hamas government does not have an independent source of income.

Iran not giving up

But Iranian foreign policy is not so naive as to completely terminate its relationship with Hamas, which could forgo its valuable strategic position in the Palestinian sphere. Iran might redirect an essential portion of its political and military support to Hamas’ competitors, such as Islamic Jihad and other armed factions. Islamic Jihad recently declared that they will be participating, for the first time, in the next PLO elections. Iranian support for Islamic Jihad would deny Hamas its claim of being the primary leader of the Palestinians.

In the months that preceded the Israeli war on Gaza, when the Iran-Hamas relationship was at its nadir, Iran provided unprecedented military support for Islamic Jihad. In fact, Israeli intelligence noted that Islamic Jihad’s military capabilities may be approaching, or have even exceeded, those of Hamas. While strengthening Islamic Jihad to fight Israel, Iran was also punishing Hamas.

Hamas’ ability to control Gaza was recently undermined when several rockets were fired into Israel during US President Barack Obama’s visit to the region. Several Palestinian factions denied their involvement, and the Hamas-led government announced that the rocket attack was not in the interest of the resistance, as it could draw a fierce Israeli response.

Was the firing of these rockets intended to disturb the calm that Hamas solidified after the latest war? Or were they rockets that carried Iranian fingerprints and a response to Israeli threats against Iran? The timing was particularly interesting, as it coincided with not only Obama’s visit, but also Iranian Supreme Leader Ayatollah Ali Khamenei’s threats to destroy Tel Aviv.

Adnan Abu Amer is dean of the Faculty of Arts and head of the Press and Information Section, as well as a lecturer in the history of the Palestinian issue, national security, political science and Islamic civilization at Al Ummah University Open Education.