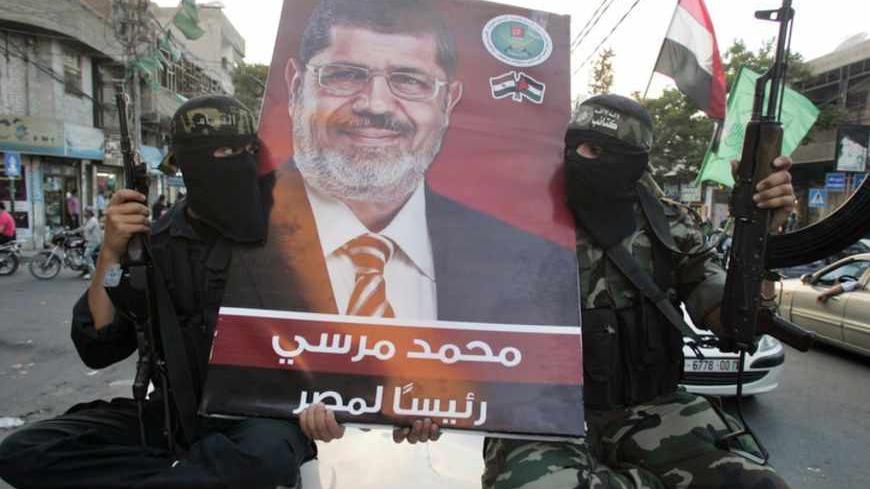 Hamas fighters hold a poster depicting Mohammed Morsi of the Muslim Brotherhood as they celebrate in Gaza City after he was declared Egypt's first democratic president, June 24, 2012. - REUTERS/Mohammed Salem

It is no secret that after the Muslim Brotherhood, Hamas was among those most pleased with Mohammed Morsi's 2012 victory in the Egyptian presidential elections. Morsi's selection followed fast on the heels of the movement's initial joy at parliamentary election results, which in turn were grounded in what it considers to be Muslim ethics. Hence, Hamas' greatest regional source of strength came to reside in Cairo. Hamas experienced something of a honeymoon following the ouster of the regime of Hosni Mubarak, which had been persistently hostile toward it.

In Egypt, Hamas believed that it had found suitable compensation (and more) for its loss of Syrian patronage when its leaders adopted a supportive position toward the popular revolution directed against the regime of Syrian President Bashar al-Assad. Indeed, its base in Damascus for the previous ten years had been predicated on a mutual interest -- joint hostility toward Israel -- and flew in the face of fundamental disagreement on religious ideology. Hamas' gradual shift toward other Arab capitals, including Cairo, contained elements of narrow self-interest as well as ideological and religious compatibility. This was particularly the case with Egypt, given that the Hamas government in Gaza considers itself the “legitimate offspring” of the Muslim Brotherhood.

Perhaps the greatest testament to the change that has taken place in Egypt, and how advantageous it has been to Hamas, came when Morsi inaugurated his term in office by welcoming Hamas leaders to the presidential palace. This is the same leadership that had at one time been banned from so much as entering Egypt and had been dealt with through the harsh prism of the security forces, which sometimes humiliated them.

It is here that wide swaths of Hamas came to understand, beyond a shadow of a doubt, that Egypt had become Gaza's backyard, not the other way around. The Rafah crossing has witnessed hundreds of Hamas members traveling back and forth, making the rounds of the Egyptian provinces, as Gaza welcomed dozens of Muslim Brotherhood delegations. This allowed the movement an opportunity to believe, if only for a relatively short period of time, that the “Golden Age” that it had experienced in Damascus had been replaced, thanks to the Arab Spring, by a “Diamond Age” in Cairo.

Hamas was soon to awaken to a new reality that banished such romantic thinking and grand ambitions. It began when the opposition started putting spokes in the wheels of the Egyptian presidency by leveling a torrent of accusations against Morsi. Some inside the country accused him of attempting to "Brotherhoodize the state." Others from abroad criticized him for "embracing Hamas." In other words, Hamas had become a liability to the Brotherhood.

This pushed a number of Muslim Brotherhood leaders to tell their counterparts in Hamas, whether through hints or open declarations, that the time had come for them to distance themselves somewhat from the Egyptian scene. This is doubly so given the many visits by Hamas activists that had necessarily included trips to the office of the Brotherhood's supreme guide and meetings with the supreme guide himself, Mohammed Badie.

Here Hamas made a mistake from which it is still attempting to recover: in the post-Mubarak era, it failed to properly exploit its room to maneuver in the Egyptian provinces. That is, it did not take the trouble to communicate effectively with the other elements of the Egyptian revolution --- the secularists, the leftists, and the nationalists. This caused its stock to fall somewhat in the Egyptian street, even among those supporting a military posture toward Israel. Without intending to do so, it appeared that Hamas had injected itself into an internal Egyptian political dispute.

Hamas' embarrassment increased after the killing of Egyptian soldiers in August 2012 as they broke their Ramadan fasts. It was said at the time that those who perpetrated the killings had no affiliation with Hamas, but simply made use of the tunnels connecting Gaza and Sinai to make their escape. The issue quickly subsided after Hamas condemned the massacre, offered its condolences, and pledged to cooperate with Egyptian security services to apprehend those responsible.

Hamas began a "late," multi-pronged media campaign, beginning with articles in the press, interviews with non-Islamist Egyptian politicians and parties, plans to host journalists on visits to Gaza, and attempts to meet with the leadership of the Egyptian army and intelligence apparatus --- in short, those who did not rush to deny the accusations directed at Hamas.

Hamas’ greatest embarrassment lies in that while it once confronted a hostile regime in Cairo, it was embraced by the Egyptian people. Now, however, it feels that situation has been reversed. Just when the Muslim Brotherhood ascended to power, and Hamas felt that its grandest ambitions had been achieved, it began to notice cracks in its once sterling image among the Egyptian public.

What worries Hamas more than anything is that even if it has not completely destroyed its reputation among Egyptians, it has alienated at least a sizeable portion of the public that sees itself in competition with the Muslim Brotherhood. This constituency begins with the supporters of the old regime and continues through the parties comprising the National Salvation Front. Hamas is troubled because these forces had provided it with patronage and attention, and because it has become a central element in the fierce partisan competition in the Egyptian political arena, having been transformed into a card to be played by every Egyptian opponent of President Morsi.

For all that, Cairo's consent to host Hamas' political leadership as well as the special election for the head of Hamas' political bureau (which took place on Egyptian territory several days ago) have reassured Hamas that Egyptian decision makers are not set to turn the page on Hamas or initiate a definitive break with the movement. This is not necessarily out of love for Hamas' leaders, but simply because Morsi's Egypt, like Mubarak's Egypt before it, is not naïve enough to leave the field open for another regional power to snatch up the Hamas card.

In this context, leadership circles in Hamas are speaking about the necessity of depriving its rivals of an opportunity in Egypt through carefully managing the borders with Egypt, particularly underground, meaning the tunnels that Egyptians have come to fear will be exploited by hostile elements. The threat might come in the form of private individuals involved in crime, drugs, or smuggling or Salafist-jihadist organizations seeking to establish an Islamic emirate in the Sinai or even other regional states lurking in wait for Cairo --- in particular, Israel, which is concerned about everything happening along its southern border.

Here one may express reservations about the declarations made by a number of Hamas spokesmen at the height of the clash with Cairo to the effect that Hamas used the tunnels to smuggle weapons during the era of the old regime, and it will continue to smuggle them through the tunnels under the current regime. These remarks were received in some Egyptian circles as insultingly defiant toward Cairo, as though one head of state were confronting another as equals, when the reality is far different.

In addition, anyone closely observing Hamas' political and media behavior of late would come away convinced that the party does not believe the events unfolding in Egypt are an internal Egyptian matter, where Palestinians should not interfere. Instead, one would be convinced that the party sees itself as thoroughly embroiled in the Egyptian scene. Indeed, some spokesmen and clerics closely affiliated with the party have said, either explicitly or implicitly, that they stand alongside Morsi and the Muslim Brotherhood.

Hamas believes it will be among the foremost threatened by any foreseeable loss for Islamists in the present conflict. This has had the effect of provoking other Egyptian factions that believe Hamas is injecting itself into their affairs.

Hamas must understand the geopolitical, strategic and historical reality: namely, that its rule over the Gaza Strip requires that it be on good terms with decision makers in Cairo. If not on warm and friendly terms, they should at least not sink to the level of an outright breakdown.

Gaza, in terms of total landmass and population, amounts to little more than a subdistrict of a remote Egyptian province. Its citizens have innumerable ties and interests in Egypt, and it is no secret that the latest crisis between Hamas and Egypt cast long, despairing shadows over every Palestinian walking the streets of Cairo. Indeed, official Egyptian treatment of Palestinians passing through the Rafah crossing grew noticeably harsher.

There are 4,000 Palestinians living in the provinces of the Sinai, Ismailiyya, and el-Arish who are subject to surveillance and monitoring by the Egyptian security forces. Their places of residence and their movements are watched as a precautionary measure, to ascertain the extent of their ties to any form of activism connected to Hamas or jihadist organizations.

Hamas must brace itself for scenarios that today may seem far-fetched. If conditions in Egypt should deteriorate with major or severe consequences, Hamas might be forced to appear less sympathetic toward its original founders --- the Muslim Brotherhood --- and closer to its rivals, not out of Machiavellianism --- though, in politics, there are worse things — but out of a simple desire to maintain its network of ties with Egypt as a whole, from one end to the other. This applies in a geographic sense, a political sense, and an ideological sense. The question is, does Hamas think so?

Adnan Abu Amer is dean of the Faculty of Arts, head of the Press and Information Section, as well as a lecturer on the history of the Palestinian issue, national security, political science and Islamic civilization at Al Ummah University Open Education.