Following a decision by the Hamas-led government in Gaza to destroy a slum that they claim was illegally constructed, the Abu Amrah family finds itself homeless and with few options, writes Asmaa al-Ghoul. 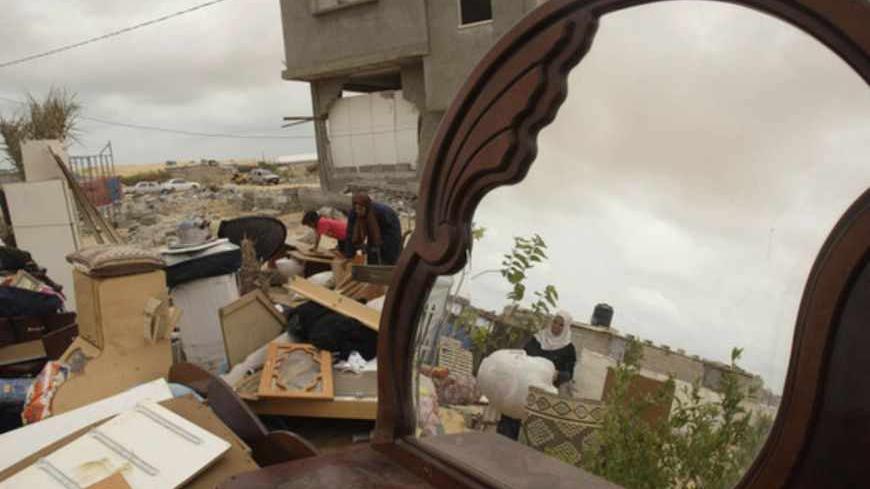 Palestinian women retrieve their belongings after their house was demolished by Hamas security forces in Rafah in the southern Gaza Strip, May 18, 2010. - REUTERS/Ibraheem Abu Mustafa

While the walk home from school used to take no more than ten minutes, it now takes twin sisters Rania and Amal Abu-Amrah nearly an hour to get home by bus. Since it’s difficult to reach their far-off home, I waited for them to finish their evening shift at the secondary school and took the bus with them.

Amal carried a worn denim bag, while Rania carried none. Rania said that the people in the heavy government vehicles that came to demolish their homes gathered all of their belongings and put them in a large bin — resembling a garbage container — and then dropped it in an empty lot filled with piles of furniture and clothes. This is how her school bag and books got lost.

In July 2012, the Gaza government led by Hamas demolished houses belonging to 152 families from the Abu Amrah clan. The houses extend over 25 acres, according to the Land Authority in Gaza.

All the students got off the bus except for the twin sisters, who got off last in the distant area of al-Maslakh al-Jadeed.

Looking sadly out of the window, Amal said, "We used to get a grade-point average of 90 out of 100 at school, but it dropped to 80 out of 100 after our house was demolished.

"I remember every moment of that night — they took all the men at night, and large bulldozers arrived early in the morning and swept away houses, including the house I was born in. I remember them saying ‘you have two hours to evacuate.’ We could not do that. The refrigerator was destroyed, but we managed to salvage the washing machine. A woman supposedly from the Legislative Council was overseeing the demolition, and did not intervene for the women and children who were crying."

The bus came to its final stop. We walked a long way along a dirt road until we arrived at their home, or what passed for one. It was more like empty land. According to the twins’ parents, it was previously a cow barn, surrounded by a fence, with a few walls. There was nothing to sit on except for a few torn mattresses. Dust could be seen everywhere, even on the faces of the big family.

The twins’ mother, Salimah Abu-Amra, told Al-Monitor, "There is no water or electricity, but at least we are not in the street. Someone offered us this place until we find another one. Some of my sons and I have not changed our clothes or bathed for 20 days."

The family consists of five daughters, including Khitam and Manar, who are in elementary school and have epilepsy, and two sons, including Abdul Aziz, who suffers from incomplete limb growth. The father is jobless and working on extending a water hose to the house. The mother is pale and suffers from hepatitis. Nevertheless, she speaks proudly about her twins and their high grades.

Salimah adds that after the destruction of the houses of the nearly 1,000-member clan, she slept with her children on the street, literally homeless. They spread out sheets like a tent over the ruins of their house. They lived there until February 2013, when the bulldozers of the Land Authority came once again to sweep away the rubble, including their tent.

Cold air blew over the foul-smelling land. The children had nothing to wear except for the heaps of discarded clothes that remained.

The mother said that she spends the day in front of the prime minister's house and waits for him to come out to beg for help. She then heads to the hospital, where she helps her mother, who is on dialysis. She stresses that without the donations people have provided, which includes the twins’ school bus fare, their lives would have ended.

She added that before the demolition of their house in 2012, security personnel cordoned off the area of​​ Abu-Amrah and imprisoned all the men, including her husband, and then bulldozed the area. Deputy Speaker of the Legislative Council Huda Naim was present.

The mother said: “No one helped us. We put all the clothes and the furniture we were able to save into large containers. A relative of mine went with them to pile our possessions in an area that belongs to acquaintances of ours. When I went to look for our belongings, books and bags, I could not pull out anything from the huge heaps."

She added that they were among the families that refused the housing options offered by the government, because they were all far from their children’s schools, and they weren’t able to move schools. She added: "I had explained my situation to the head of the Land Authority, Ibrahim Radwan. I told him that my mother needs me to accompany her when she undergoes dialysis. He promised to find me an alternative house soon."

Al-Monitor interviewed the director of public relations for the Land Authority, Amal Shamali, who described the aforementioned claims as lies and slander. She said that the Abu-Amrah slum was demolished according to Law No. 5 of 1960. She added that they had conducted long negotiations with the Abu-Amra clan starting in late 2009, and that a decision had been made by the first authority in 2000.

Accordingly, she said, the Abu-Amrah clan was transferred to a number of empty areas in Khan Yunis and Beit Lahiya, and Gaza City was not even an option. She noted that cars were provided for the transport of both family members and furniture, and that they even chose where they wanted to put the furniture. She pointed out that when the Abu-Amrah family first arrived in 1948 as a immigrants, they did not live in UNRWA-administered refugee camps, but seized a civilian area that had been set to be developed into a public area.

She said that the government will give the family 40% discounted land, and an amount of $3,000 will be deducted from the price in compensation for the demolition of their homes. The construction of new houses would be at their own expense. She said that during the first demolition stage in July, each family was granted $1,000 for rent, which cost the government over $200,000. The second demolition stage was carried out last February, and the Legislative Council oversaw the demolition process.

We visited the house of the grandmother of Rania and Amal, who still lives in the Abu-Amrah slum in what looks like a tiny nylon-and-cardboard cage surrounded by the rubble of her relatives’ houses, as if an earthquake had hit the region.

Marzougah is surrounded by bags of chips and sweets, which she sells to students from a nearby school. She uses her daily earnings — which amounts to $8 — to help her jobless grandson, who suffers from cancer, and her second son, Rania and Amal's father, who has other disabled children.

She said that during the rule of Yasser Arafat, she was offered money and alternative lands, which they considered not suitable. After the demolition of their houses, they now have no other choice than what the current government is offering. Family members have been transferred south and north of the Gaza Strip, where land is supposed to be available for low prices.

"But how we will pay these premiums while do not work, and heading there means that we have to pay?" she asked.