Why the Turkish Opposition Likes Assad

Mustafa Akyol explains why the People’s Republican Party (CHP) is at ease with Syrian President Bashar al-Assad and is unlikely to become a "social democratic party" in the European tradition. 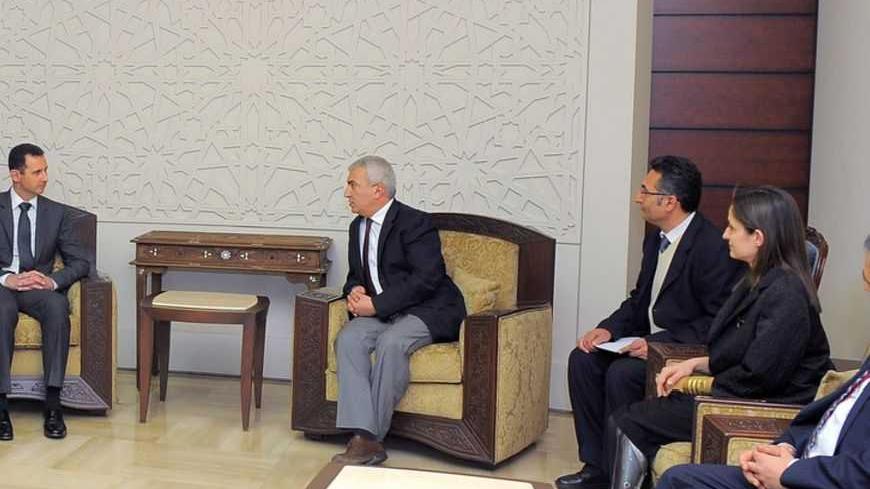 On March 8, four deputies from Turkey's main opposition People's Republican Party (CHP) visited with Syria's ruler, Bashar al-Assad, in his headquarters in Damascus. After an apparently warm meeting with the dictator, they smiled together to cameras, in a pose that starkly contrasted with the tension between the Syrian regime and the Turkish government led by the Justice and Development Party (AKP).

A few days later, Aslı Aydıntaşbaş, a Turkish journalist who is often more sympathetic to the CHP than the AKP, wrote a bold critique of this visit in the daily Milliyet, a traditionally pro-CHP paper.

She argued: "Had this [CHP] delegation gone to Syria to save imprisoned journalists, they would have contacted Arzu Kaddumi, the wife of Beşar Kaddumi [who is a Turkish journalist held captive in Syria]. This was not the case. Had their intention been serving 'peace' as they claimed, then they would have a former diplomat in the delegation, or representatives from the Arab League or the United Nations. This was not the case either. Obviously, the CHP delegation went to Syria to bring the messages of Bashar Assad back to Turkey, to oppose Erdoğan by helping the Assad regime advance its propaganda."

In fact, this was only one of the many expressions of pro-Assad views by prominent CHP members. On March 6, Ümit Özgümüş, a CHP deputy from Adana, a southern province, gave a speech in the Turkish Parliament passionately objecting to the AKP view that the "Assad regime kills its own people." This, he argued, was "a lie just like the lie that there were weapons of mass destruction in Iraq." He then went on to praise "the resistance of the Syrian people against imperialism" — echoing the common view in the Turkish left that the whole Arab Spring is an American conspiracy, which aims at establishing "moderate Islam" at the expense of secular regimes.

This strange sympathy of the CHP towards the Assad regime has beeen witnessed by foreign obsevers as well, including Tawakkol Karman, the Yemeni Nobel Peace Prize laureate. After joining a conference on the Arab Spring organized by the CHP, she reportedly said, "I have never seen people defending the Syrian regime this passionately before."

But why? Why is this love affair between Turkey's main opposition and Syria's bloody regime?

There are a few interrelated answers. The first is a very simple one: The CHP often simply opposes everything that the AKP government does. Whatever is white for Erdoğan is pitch black for them. And since Erdoğan supports the Syrian opposition, the CHP intuitively feels closer to the Syrian regime.

But there are deeper reasons as well behind the CHP's stance on Syria, such as sectarianism and ideological affinity.

First, sectarianism. It is no secret that the Assad regime in Syria is based largely on the Alawite minority which holds keys positions in the state and security apparatus. It is also no secret the overwhelming majority of Turkey's own Alevis support the CHP and make up the bulk of its cadre. And while Turkish Alevis and the Syrian Alawites are not identical, they are similar and sympathetic to each other.

Then there is ideology. As a comparative history of Turkey and Syria would reveal, the ideologies the CHP and the Assad regime, Kemalism and Baathism, share important similarities. Both envision a secular and nationalist single-party-state, in which opposition to the ruling party counts as high treason. (Vali Nasr, in his notable book, The Rise of Islamic Capitalism, underlines these similarities and goes as far as defining Baathism as the Arab version of Kemalism.)

The two ideologies are similar, but not exactly contemporary. In Turkey, the golden age of Kemalism was the second quarter of the 20th century, during which today's CHP had closed down all opposition parties and silenced all critics, making itself identical with the state. This total lack of democracy was justified by the argument that the ruling party was "progressive," whereas dissatisfied masses were too "ignorant" to be taken into account. "For the people," read a popular CHP motto of the time, "in spite of the people."

To their credit, the CHP elite proved more moderate than the Baathists in Syria, for they accepted transition to democracy as early as 1950, allowing the first free and fair elections of the Turkish Republic, in which the CHP was defeated and overthrown. ("The Turkish Spring," one can therefore say, succeded in 1950.) But some CHP members saw this transition to democracy as a mistake, and that is why they supported military coups against their elected rivals.

All this means that the popular yearning for democracy — the main theme of the Arab Spring — does not mean much for the CHP.  Since their highest political values are secularism and "full independence," neither democracy nor the international trends that promote it gain their sympathy.

One can even reason that the very brutality of the Assad regime is not too disturbing for the CHP, for it has a similar history of state violence. In 1937, rebellious Kurdish tribes of the Dersim province were subdued by the CHP regime with aerial bombardment of urban areas and poison gas used against civillians. Whenever this dark episode is questioned, CHP speakers justify it, with arguments which clearly reveal that they put "state authority" above innocent human lives.

All this implies that with its current ideological makeup, the CHP has no chance of becoming a "social democratic party" of the European fold, as it sometimes pretends to be. And nothing underlines this bitter fact more than the party's love affair with Syria's ruthless tyranny.

Mustafa Akyol is a contributing writer for Al-Monitor's Turkey Pulse, and a columnist for two Turkish newspapers, Hürriyet Daily News and Star. His articles have also appeared in Foreign Affairs, Newsweek, The New York Times, The Washington Post, The Wall Street Journal and The Guardian. He studied political science and history at the Boğaziçi University in Istanbul, where he still lives. His book, Islam Without Extremes: A Muslim Case for Liberty, an argument for "Muslim liberalism," was published by W.W. Norton in July 2011.