Campaign Against Hagel Was A Loser

Another few unnecessary, unjust and unwise campaigns, such as the one against Chuck Hagel’s nomination for Secretary of Defense, and the myth that the Jews control the United States will become a legend, writes Akiva Eldar. 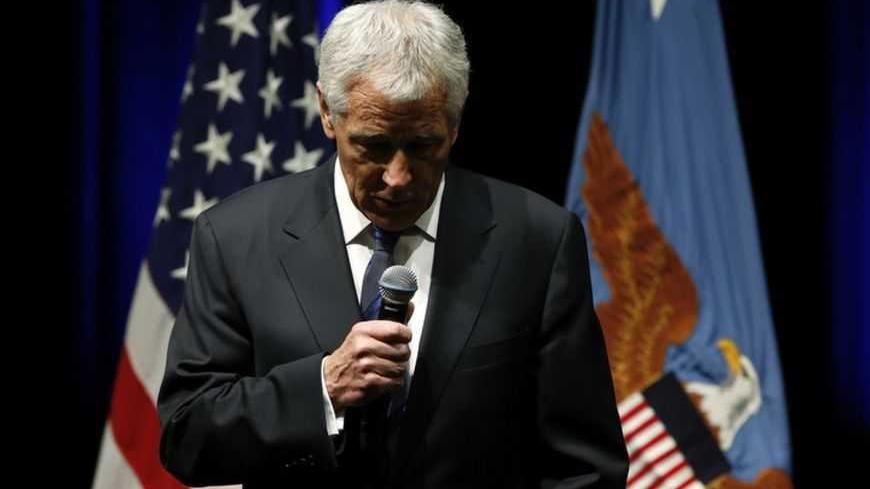 US Secretary of Defense Chuck Hagel pauses during remarks to service members and civilian employees on his first day at the Pentagon in Arlington, Va., Feb. 27, 2013. - REUTERS/Jonathan Ernst

The failure of the Israeli-Jewish campaign conducted behind the scenes in an effort to thwart the appointment of Chuck Hagel to the position of US defense secretary, in addition to the openly visible attempt in which Prime Minister Benjamin Netanyahu played an active role trying to oust President Barack Obama from the White House, reminds me of a panel discussion held in the mid-1990s at the George McGovern (the Democratic presidential candidate in 1972) Center in Washington.

The discussion centered on coverage of the Middle East in the US media. One of the participants, an editor of an important Egyptian newspaper, claimed that “everyone knows the US media is controlled by Jews,” and immediately came to this conclusion: “Naturally, their reporting and analyses are skewed in Israel’s favor.” Martin Sieff, then a Washington Times correspondent, himself of Jewish origin, took issue with his Arab colleague’s claim. He listed one by one the names of the owners of large newspapers and television networks, who do not have a single Jewish gene in their bodies.

On our way to the parking lot, I remarked to Sieff that it’s a shame to undermine the prevailing belief in the Arab world that the Jews control the media, as well as the politics and economy of the United States. I explained that the myth of world Jewish domination is Israel’s most important deterrent force. One could term it “constructive anti-Semitism.”

For decades this myth was nurtured by the Jewish organizations in the United States, led by the Jewish pro-Israel lobby AIPAC, which acquired the reputation of being the second most powerful lobby in Washington (the most powerful being the National Rifle Association, which opposes gun control). Presidents show up at their annual conventions, dozens of members of Congress take part each year in AIPAC’s campaign drives for Israel and senators blindly sign petitions supporting the organization. The Jewish community, which constitutes some two percent of the US population, has succeeded in admirable fashion in increasing aid to Israel over the years, in promoting sanctions against Iran and in withholding aid from the Palestinian Authority.

But there are other angles, as well — that of its intoxication with power and its limitation of power. The following story, which I heard from a European diplomat who served in his country’s embassy in the United States, is a good illustration. This diplomat described how one day, at the end of lunch with a senior AIPAC official, the man waved the bill in alcohol-induced bonhomie and said laughingly: “If I want, I can get 98 senators to sign it."

Is the pro-Israel lobby (Hagel was right in terming AIPAC “a Jewish organization”; it does have a Christian department, but since its establishment in the 1950s, all of its leading politicos and senior employees have been Jewish) in fact the tail that wags the dog? Are neocon Jewish billionaires and the Christian right wing dictating the Middle East policy of US administrations and the houses of Congress? Is the failed attempt of casino tycoon Sheldon Adelson against Barack Obama’s re-election as president and his defeat in the campaign against Hagel nothing else but two gambling losses in a winning streak? After all, the $100 million, maybe a little more, that Adelson invested in the campaigns is small change in the bank account of the gambling baron whose worth is in the billions.

In other words: Are the Jewish activists who portrayed Hagel as “an Israel basher” really running the world’s strongest power?

A quick historical review indicates a significant measure of exaggeration regarding the strength of the Jewish lobby in the United States. It turns out that Hagel is not the only senior US politician who puts his country’s interests first, before those of its friends. Many good American leaders before him stood their ground and rebuffed pressures from the Jewish organizations each time the US interest overrode that of its closest friends, including Israel’s, and there are many such examples.

When the US administration decided in the mid-1970s that US interests in the Middle East mandated promoting disengagement agreements between Israel and Egypt and Syria, it threatened a ”re-evaluation” of US-Israel relations. No Jewish power stopped President Gerald Ford and Secretary of State Henry Kissinger on their way to get [then-Prime Minister] Yitzhak Rabin’s signature on the disengagement agreements.

The enthusiastic support of the Jewish organizations for the attack on the Iraqi nuclear reactor in June 1981 did not ease tensions caused by the operation in US-Israel relations and did not change the decision to delay a sale of planes to Israel. AIPAC’s storming of the Congress did not prevent the sale of AWACS intelligence aircraft to Saudi Arabia that year, despite Israel’s angry opposition. Incessant attempts by Jewish organizations to promote a US presidential pardon for spy Jonathan Pollard, imprisoned since 1985 for passing classified information to Israel, have so far proven futile.

In 1991, the Jewish organizations brought out all their big guns, including well-known rabbis, in order to force President George H. W. Bush to go back on his decision to provide Israel with a 10-billion-dollar guarantee, which was vital for the absorption of the waves of Jewish immigration from the former Soviet Union, only on condition that it freeze construction in the settlements. Despite being in the throes of a presidential election campaign, he repelled the pressures of the lobby and Congress. Bush publicly blamed AIPAC for acting against the interests of the United States. The head-on confrontation contributed greatly to the defeat of the Likud, headed by Prime Minister Yitzhak Shamir, in the 1992 elections.

Three years later, several months before the launch of President Bill Clinton’s bid for a second term, AIPAC leaders persuaded his rival, Sen. Bob Dole, and the Republican majority leader in the House of Representatives, Newt Gingrich, to promote a bill transferring the US embassy in Israel from Tel Aviv to Jerusalem. They did this despite the opposition of Prime Minister Yitzhak Rabin and President Clinton, who feared the move would undermine peace efforts with the Palestinians. In fact, the bill passed by a sizeable majority in both legislative houses, but since then, every six months, US presidents sign waivers suspending the bill with the explanation that its implementation would be detrimental to the national and defense interests of the United States. For the same reason, in 2003 President George W. Bush rejected the opposition of the Jewish organizations to the Road Map, a US peace plan which included recognition of a Palestinian state, a freeze on settlements and an evacuation of illegal outposts. Six years later, pressure from AIPAC did not prevent President Barack Obama from imposing a ten-month settlement freeze on Netanyahu.

When Hagel has to choose between the Israeli interest in bombing Iran and the US interest in preventing a new confrontation in the Middle East, there is no doubt how the secretary of defense will act. Adelson’s friends in Jerusalem should only hope that Hagel does not present them with the bill for the humiliation dished out to him.

Another few unnecessary, unjust and unwise wars, such as the battle against Hagel, and this myth that the Jews control the United States will become a legend and contribute to needless and destructive anti-Semitism.