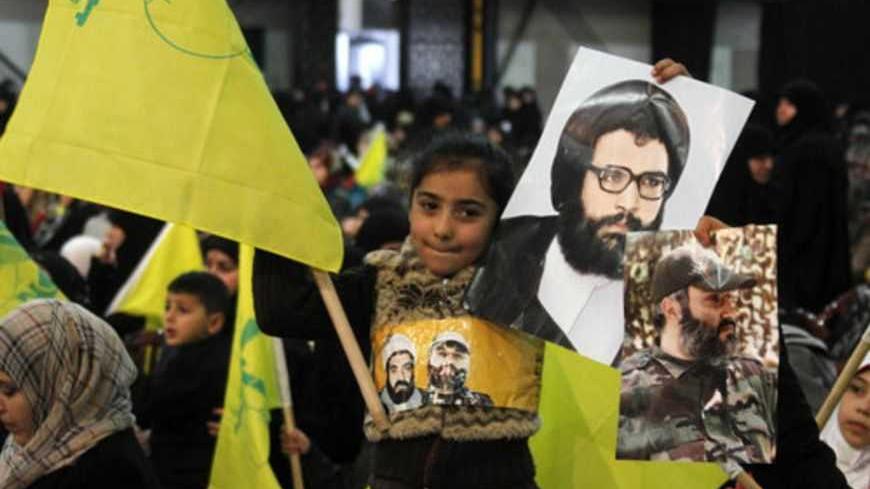 A child waves a Hezbollah flag as she holds pictures of martyrs as Hezbollah leader Sayyed Hassan Nasrallah addresses his supporters during a rally to commemorate Martyrs' Day in Beirut, Feb. 16, 2013. - REUTERS/Sharif Karim

Hezbollah Secretary General Hassan Nasrallah appeared on TV to deny rumors that he has cancer and was transferred to Tehran for treatment. His appearance was carefully planned from a psychological warfare perspective. By listening to his speech, experts will conclude that he is not sick and is in fact behind his desk in Beirut directing operations. The speech also portrays him as competently confronting the internal sectarian strife knocking on the door.

Three psychological features were apparent in his speech. They are part of a “psychological-security plan” aimed at denying rumors of his illness and at showing that he is still in the country.

First: his calm demeanor. He did not raise his finger threateningly at Israel as he used to, even though Israeli jets are overflying Lebanon in an unprecedented way these days, conducting mock raids at low altitude over border areas. Nasrallah’s calm demeanor revealed that the party possesses an “advanced psychological missile” fired at Israel and the party’s many enemies. The objective was to leave the impression that Nasrallah is in excellent psychological health, indicating that his physical health is also sound.

Second: the context. Nasrallah used his appearance — which was ostensibly intended to deny that he was afflicted by cancer or that he was in Iran — to also address recent political developments, some of which happened a few hours before his speech. He mentioned Parliament Speaker Nabih Berri’s statement, made two hours before Nasrallah’s appearance, in which the former announced he was withdrawing his electoral proposal. Nasrallah wanted to signal that he is monitoring events very closely and is not bedridden in Tehran. His speech contained dozens of instances designed to give the impression that he is closely monitoring events.

Third: vigilance. Nasrallah gave the impression that he is going through a period that requires him to strategically consider how to prevent triggering sectarian strife in Lebanon. He warned of the danger this strife could pose and called for sincere efforts to prevent it from happening. But he also gave the impression that he is able to confront it if it were to occur.

His TV appearance was designed to show him as not only in good health but also with full mental capacity from political and strategic perspectives, and that he is perfectly able to make major political decisions. This is illustrated when he said, “Do not make any mistakes with us.”

According to sources close to the party, Hezbollah believes the rumors that Nasrallah was sick and has moved to Iran were part of psychological warfare being carried out against the party, a war that has intensified in recent times. Israel is its architect, and its aim is to influence the morale of the resistance members and support base.

The sources list some of the methods used in the psychological campaign. These include rumors that Hezbollah’s assistant secretary general, Sheikh Naim Qassem, was assassinated; rumors that a car bomb was detonated in the southern suburbs of Beirut, whose majority is Shiite and supports Hezbollah, in order to cause panic; and mock raids being conducted by Israeli aircraft over areas thought to contain Hezbollah military bases. The mock raids sounded real and  were intended to strike fear in the hearts of the fighters.

A series of events happened that together form a professionally conducted psychological war. They reached their peak with the rumor that Nasrallah was sick and had left Lebanon.

These sources reveal to Al-Monitor the following facts:

1. The party traced the source of the rumor that Nasrallah was ill to Beirut International FM, a radio station with limited range, but was still picked up locally and internationally. It is clear that choosing this radio station was intentional to conceal the party responsible for the leak.

2. The party has a tradition to never hide the news that one of their leaders is sick. Hence, Nasrallah’s medical records are public and they show that he is free from disease. The only time he fell ill was several years ago, when he suffered from a narrowed vertebrae. He underwent treatment and did not cover it up.

3. Nasrallah personally attaches special importance to psychological operations against Israel and closely follows the psychological war that Israel wages against Hezbollah. In one instance, he refused to postpone his planned speech when he learned that his son had been killed two hours earlier in a military operation in the South. Nasrallah said to his advisers, “Relax, I will give my speech on time. I do not want to give the impression to the enemy that the death of my son has affected my morale.”

It is no secret that Hezbollah attaches special importance to psychological warfare in its fight against Israel and its enemies. Hezbollah’s televised appearance yesterday was one round in that war, in which the party used one of its best psychological weapons. It is clear that before Nasrallah’s appearance, his speech had undergone scrutiny by the party’s psychological warfare experts. The way Nasrallah appeared was planned. Those who watched the speech can decide for themselves whether the plan worked. If they come out with the impression that rumors of his illness were false then the plan worked. The party would like to know how the “psychological war speech” affected the Israelis. They hope that the faces of the Israeli security agents would show their dismay after seeing Nasrallah on TV and in good health.