Amid a floundering job market, many Iraqis look to public-sector jobs as a means of stable, permanent employment, reports Omar al-Shaher. 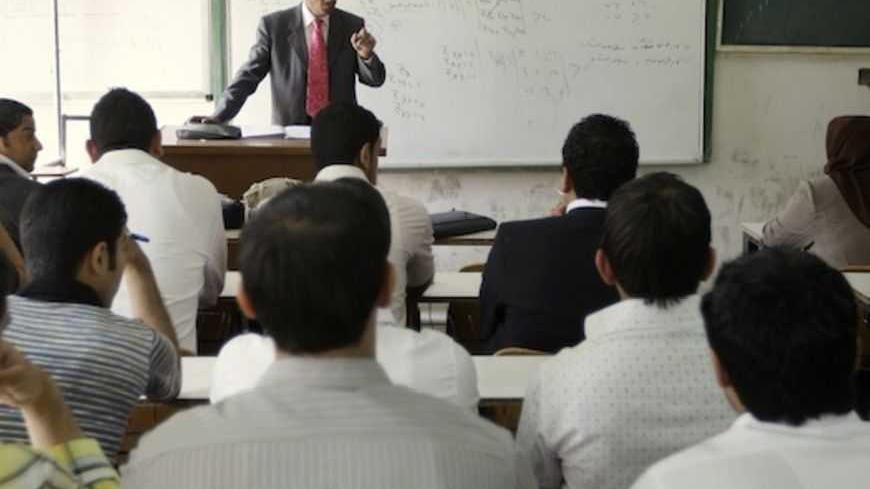 A professor gives a lecture to students at the College of Administration and Economy in Baghdad University, Mar. 16, 2009. - REUTERS/Thaier al-Sudani

The Iraqi Ministry of Education said that one of its universities has surrendered to overwhelming pressure and agreed to sign contracts with several employees based on a daily wage system. They have settled on a salary of $8 per month. The employees hope to obtain permanent positions as they become available. Some of them have leaked information to the media to increase the pressure on their employers.

A job in the government has become the dream for millions of Iraqi university graduates, as the private sector plays a declining role in the job market.

Qassem Muhammad, media manager in the Iraqi Ministry of Higher Education, stated that “the Iraqi media has published reports about the contract between the University of Technology and daily wage workers. As long as they settle for around $8 per month, they get a promise of permanent employment. This was seen as an act of exploitation or mismanagement by some. Moreover, the truth is that these contract workers have put a lot of pressure on the university to push it to sign contracts with them. They were even willing to give up their wages for the contract, since it would give them priority to become permanent employees, in case of job availability.”

Muhammad believes that several contract workers leaked the contract to local media in order to amp up pressure on the university to give them permanent employment.

The Ministry of Higher Education benefits from a law known as the “Academic Service Law,” which provides for a higher salary for university teachers and administrators. Those holding a bachelor’s degree from one of Iraq’s universities gets paid roughly $800 per month upon beginning work, while the salary of someone working in any other governmental sector does not exceed $500. This has made higher education appealing to individuals who want to work with the government.

Muhammad said that he has examined contracts that were signed by the workers. He says they settled for a symbolic salary, on condition of allowing them the opportunity to be appointed as permanent employees.

He added, “The law gives universities financial and managerial independence, and grants them legal status. For this reason, the ministry was not aware of these contracts, since they were outside its area of expertise.”

Iraq stopped following a daily wages system about two years ago, and the ministry gave its orders to make the contract workers permanent employees if new positions become available.

Most jobs created by the country’s budget during those two years have aimed to make contract workers permanent employees and to calculate their actual contract terms for raise, salary and contractual purposes.

Sources from the University of Technology said that some employees have been on contract for more than two years, and others for more than a year, without being included in the permanent employee scheme. Some became so desperate that they left their jobs altogether.

In some cases, the monthly salary specified in the university contract amounted to 1,000 Iraqi dinars — or less than 90 cents.

A permanent employee at the Ministry of Higher Education said that “the efforts deployed by the daily wage contract workers are not different from those of their permanent counterparts.”