Sources close to Hezbollah consider the resignation of Prime Minister Najib Mikati to be the result of pressure from outisde powers, writes Nasser Chararah. 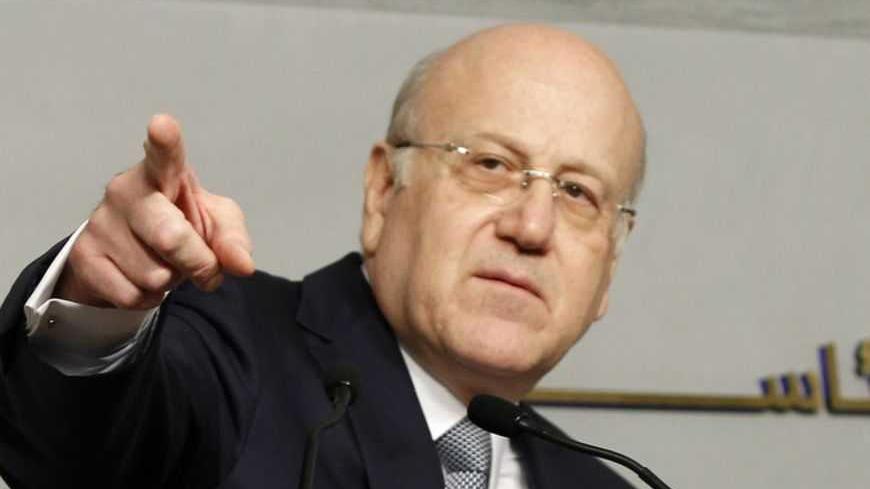 Hezbollah is about to adopt a strict policy regarding the topics to be discussed at the negotiating table in order to reach an internal consensus to end the crisis that has plagued Lebanon since last year. There is a conviction within the party that Washington has taken a decision to place political pressure on Hezbollah in order to weaken its position within the power equation in Lebanon and tighten the regional and international siege on it.

Amid these developments came the surprise resignation of Lebanese Prime Minister Najib Mikati, with the aim of leaving Hezbollah outside the legitimacy of the state in Lebanon, as a prelude to depriving it of any internal support in the face of the US pressures, which are expected to escalate, according to a source close to the party.

According to this source, Washington advised Mikati to resign early this year, but left the final choice of the timing for him to make based on the Lebanese political circumstances.

The source talked to Al-Monitor said that Hezbollah believes that the West no longer considers that the main danger threatening as coming from the Syrian crisis, but from Hezbollah's negative role in the internal arena, its position toward the Syrian crisis and its active terrorist cells in countries in the region and across the world.

At the international level, Washington is putting pressure on the European Union to include Hezbollah in its list of terrorist organizations, against the backdrop of Bulgaria's accusation that the military wing of the party was involved in the bombing of an Israeli tour bus.

The source revealed that there is a manhunt for Lebanese around the world on charges of having ties with the party. These are deported from the countries they work in.

The same source said that according to the Hezbollah leadership's analysis regarding the US motives behind the significant pressure on the party, Washington is primarily seeking to punish the party for its role in defending the Syrian regime. The Friends of the Syrian People, according to the same source, think that the party's military contribution — which has recently intensified in the countryside of Damascus (Sayeda Zeinab area) and in the countryside of Homs (Talkalakh and Qusayr area) — had a significant role in promoting the military regime's status in these two regions.

According to the same source, the party’s leadership believes that, among other goals, Washington seeks to undermine the party in Lebanon in order to form a new government that would be closer to the March 14 coalition in its cooperation with independent candidates, at the expense of a strong presence of Hezbollah.

The leadership also believes that Washington seeks to weaken Hezbollah, so as to invalidate this strong card for the Iranians, especially as a prelude to the possible meeting between Washington and Tehran to discuss Iran’s nuclear program and other critical issues in the region.

Moreover, the source added that Hezbollah has been keeping a close eye on the recent significant developments, which suggest that Washington has been undermining Iran’s strong cards in the regions so as to tip the balance in its favor in its cold conflict with Tehran. For instance, Washington has supported Ghassan Hitto (a Kurdish Turk) as the head of the government of the Syrian opposition, in an attempt to satisfy the Kurds — the PKK in particular — so as to break the alliance that emerged between the party, the Syrian regime and Iran nearly a year ago.

In the same vein, Hezbollah believes that Mikati’s resignation is not the result of internal causes but of the political pressures on the party, which is also connected to US goals to undermine the role of the Syrian regime and Iran in the region.

Based on information obtained from Hezbollah sources, Damascus, Tehran and the the Shiite party have decided to face this new campaign that is being waged against them, which would adversely affect the potential solutions to the domestic Lebanese crisis, mainly the new electoral law. This law ought to be unanimously agreed upon in order to hold the elections in a timely manner, according to the constitutional deadline, so as to prevent the anticipated constitutional vacuum in the legislative and executive branches as well as in the presidency.