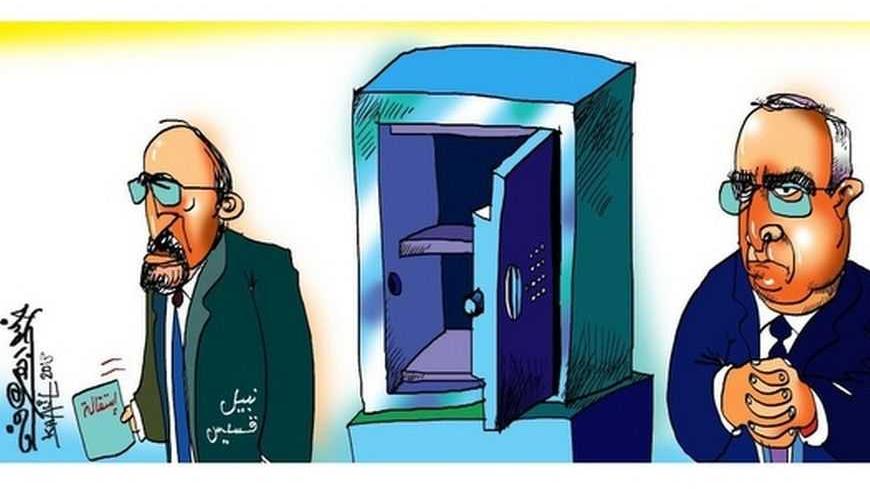 Khalil Abu Arafeh’s cartoon, which ran in the Sunday, March 3 edition of the leading Palestinian newspaper Al Quds, left no doubt as to the reason behind the resignation of Nabil Qassis, the Palestinian minister of finance. Abu Arafeh showed an empty safe, with Prime Minister Salam Fayyad’s hands folded next to the empty cash box.

But while the absence of cash is probably the main cause for Qassis' resignation, the only report about it in the Palestinian media — on the Ma’an news agency’s website — drew a more complicated picture. According to the Bethlehem-based online news agency, Fayyad accepted the resignation and commended Qassis for his efforts, but President Mahmoud Abbas refused to accept the resignation and asked his chief of staff to convince the minister to withdraw it.

Qassis, a respected Palestinian academic who has held the position of Birzeit University president and senior negotiator during the post-Madrid talks, has presented a budget of $3.6 billion, which includes a $1.4 billion deficit. This deficit is to be added to the existing $1.2 billion that the Ramallah-based Palestinian government owes to local banks and has been accumulating in the past three years, due in large part to the failure of Arab countries to fulfill their pledges to the Palestinian people. The financial problem was exasperated in recent years due to the US also cutting off funding to the Palestinians.

To remedy the problem, Qassis has suggested a belt-tightening set of deep cuts that include the suspension of any pay raises to public servants and an end to the payment of electricity bills for Palestinian refugee camps in Gaza and the West Bank. Ministry officials estimate that the Qassis recommendations could save $330 million for the Palestinian coffers. Add to that an estimated $800 million in outside support to Palestinians that officials predict will be delivered in 2013, and the deficit would be greatly reduced.

However, the deep cuts have been strongly opposed by the strong public-employees union, which is headed by senior Fatah leader Bassam Zakarneh, described in some circles as one of the strongest men in Palestine because of his ability to sway the powerful union. Zakarneh has threatened to impose a four-day school week and other long-term work stoppages if the public workers’ benefits are affected. Similarly, the PLO leadership would have a hard time justifying reneging on promises made by revered PLO leader Yasser Arafat to Palestinians living in refugee camps at the start of the second intifada that the Palestinian Authority would cover their electricity bills.

Naturally, if cutting costs is not possible, then the only alternative would have to be to increase revenues. This was also an idea that Fayyad and Qassis supported, but were unable to push through. Sources in Ramallah say that the idea of a tax hike largely failed due to objection from businessmen politically aligned with Fatah, and who obviously felt their interests would be harmed if their taxes increased.

Another obvious source of revenue could be Arab and international supporters of Palestine. But as with all large cash transfers, there is a political price. For the most part, Arab governments — especially the rich oil-producing countries — are said to be withholding support for one of two reasons. There is pressure from the United States over the Palestinian government’s decision to go to the UN and flaunt Western attempts to restart the peace talks. Another source of hesitation is the continuation of the split between Gaza and the West Bank and the failure of Fatah and Hamas to reconcile. This could explain why the talk of reconciliation is much more popular than real actions to reconcile. Whereas the first gives the impression that they are fulfilling the requirements of certain Arab donors, the latter reflects a real fear of power loss.

Faced with such a dilemma, Qassis had little choice but to resign. Not belonging to one of the main political factions and without the political clout to move the unions and the leaders of the refugee camps, Qassis was pushed into a corner. With this, in addition to the failure of Arab countries to actually transfer money, the well-respected finance minister called it quits. And despite late efforts by Abbas and his staff to change his mind, he has chosen to exit the political stage leaving the Palestinian leadership without an immediate solution.

The empty coffers depicted in Khalil Abu Arafeh’s cartoon remain empty even after Qassis’s resignation. The question remains whether the Palestinian Authority will choose to make political concessions toward Israel, Hamas and the Arabs, or put serious pressure on its own employees. All are difficult choices.