Erdogan's Kurdish PoliciesBreak From Turkey's Past 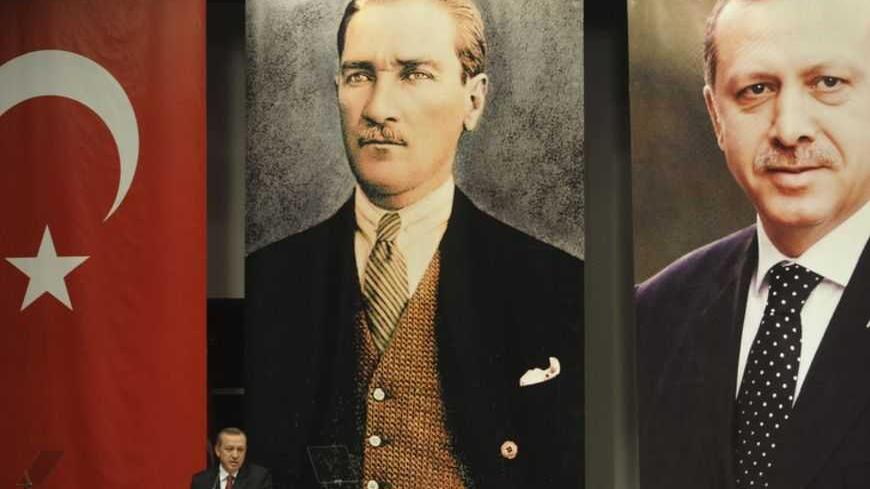 Turkish Prime Minister Recep Tayyip Erdogan addresses members of his ruling Justice and Development Party while standing in front of portraits of Mustafa Kemal Ataturk, founder of modern Turkey, and himself during a meeting at party headquarters in Ankara, July 11, 2012. - REUTERS

At a time when Turkey's warm relations with the Iraqi Kurdistan Regional Government (KRG) have reached the level of a strategic energy partnership, Abdullah Ocalan, the potential leader of a would-be Turkish Kurdistan, has called for a permanent peace between his armed followers and the Turkish government. This is no mere coincidence and is perhaps even a sign of an upcoming Turko-Kurdish axis that could alter balances in the Middle East. First, a brief summary is offered on how the current situation came to be.

From the establishment of the Turkish Republic in 1923 and into the 21st century, one could not speak of an alliance between Turkey and the Kurds for a very simple reason: Turkey did not acknowledge the existence of Kurds. In Turkey, this was manifested by a paranoid oppression of Kurdish identity. Abroad, the same mindset expressed hostility toward any kind of Kurdish political presence, such as the one in Iraqi Kurdistan. Kemal Ataturk's famous motto "Peace at home, peace in the world" was understood in part by most of his followers as "No Kurds at home, no Kurds in the world."

With the progression of the new century, however, Turkey began to change. A new political elite spearheaded by the Justice and Development Party (AKP), led by Recep Tayyip Erdogan, gradually replaced the ruling old guard. This new elite was less secular than its predecessors as well as less nationalistic and more pragmatic. Hence, soon came Turkey's diplomatic rapprochement with the KRG, beginning in 2007 in tandem with booming Turkish business and civil society. Within a few years, Ankara and Erbil, which had been mutually suspicious if not outright hostile toward each other, became friends and partners. The fact that both capitals disagreed with the policies of the Nouri al-Maliki government in Baghdad, and the "Iranian axis" that it implied, also helped bring the two closer.

The latest step in the Ankara-Erbil rapprochement is a deal to allow Iraqi Kurdistan's oil and gas exports to flow to international markets via Turkey. Although central government officials in Baghdad categorically object to the plan, arguing that the Iraqi constitution does not give Erbil the authority to enter into such an agreement, the Kurds in the north differ in their constitutional interpretation and insist that they have every right to sell their own oil and gas.

A senior Turkish official who spoke with Al-Monitor on the condition of anonymity offered Ankara's perspective on the issue, stating, "The oil agreement Turkey plans with the KRG doesn't contradict the Iraqi constitution. The revenues from the agreement will be divided according to the constitution. KRG has signed such agreements with other companies before." He also asserted that "the real problem is that the Baghdad government has not been able to pass the hydrocarbon law for years." Underlining Ankara's pragmatism, he added, "Northern Iraq [KRG] needs oil revenues, and Turkey needs oil. There is nothing unusual about this."

His statement would appear to confirm that the KRG plans for oil to begin moving from Turkey in 2014 as expected, which would further integrate the KRG and Turkish economies on a long-term, strategic level. That is perhaps why third parties, including the United States, are concerned that Ankara and Erbil's new deal, which seems to be at the expense of Baghdad, might "jeopardize" the unity of Iraq.

Less than a decade before, the Turkish government was the party raising concerns about the "unity of Iraq" — in the face of American support for Iraqi Kurds in the aftermath of the war in 2003 and subsequent occupation. That today it is the United States that expresses alarm at the level of Turkey's cooperation with Iraqi Kurds demonstrates how dramatically the tables have turned.

Evidence of Turkey's relationship with its own Kurdish population entering a new and more cordial stage was apparent in the much-acclaimed Newroz message by Ocalan, the jailed leader of the armed and outlawed Kurdistan Workers Party (PKK), whose war with the Turkish state has claimed more than 40,000 lives.

In his message — delivered March 21 and read aloud in Kurdish and Turkish by two Kurdish parliamentarians to a million-strong Diyarbakir crowd — Ocalan called on the PKK to end its 30-year armed struggle and opt instead for "political struggle." He emphasized that the political objective should be not carving an independent Kurdish state from Turkey, but achieving more rights and likely some form of autonomy for Kurds, who will continue to be Turkish citizens. The PKK leader also referred to the historical unity between Kurds and Turks. “Turks and Kurds fought together in Çanakkale [Gallipoli during World War I], and launched the Turkish parliament together in 1920,” he said, arguing that it is, again, "time for unity."

Ocalan's message, referred to as "historic" and "groundbreaking" by mainstream Turkish media, was the fruit of a somewhat covert dialogue the Erdogan government has been having with the PKK leadership since 2009. Initial attempts to disarm the PKK failed, leading to a mutual escalation of violence in 2011 and 2012. Apparently, however, the government did not give up hope for a political solution and ultimately found Ocalan, with thoughts of being a "Kurdish Mandela" in the final phase of his career, to be a reliable partner. It was reported that in this new era of cooperation with the Turkish goverment, which became public in the last four months, Ocalan sent messages to his Kurdish followers in Syria, organized under the Democratic Union Party, to support the Turkey-backed Syrian opposition rather than the regime of President Bashar al-Assad.

All this points to a new era in the Middle East in which Turkey, for decades a Kurdo-phobic state, might well emerge as a patron and ally of the Kurds, at home and abroad. If so, the AKP's supposed "neo-Ottomanism" might have acheived a great success. It was the multiethnic Ottoman Empire that kept Turks and Kurds united for centuries and never shied from the existence of a somewhat autonomous region called Kurdistan.

Mustafa Akyol is a contributing writer for Al-Monitor's Turkey Pulse and a columnist for the Turkish newspapers Hürriyet Daily News and Star. His articles have also appeared in Foreign Affairs, Newsweek, The New York Times, The Washington Post, The Wall Street Journal and The Guardian.