The desecration of an ancient Jewish cemetery in Sousse has brought back long-forgotten memories and fears of anti-Semitism in Tunisia, writes Jacky Hugi. 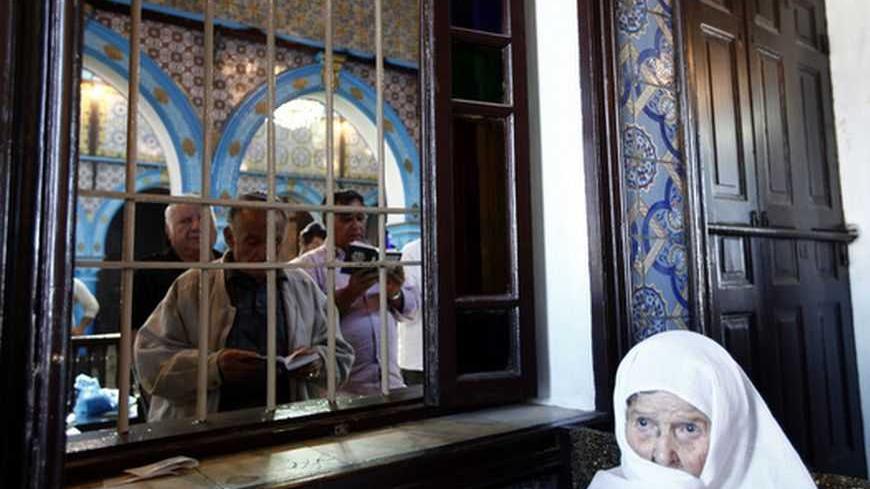 A woman listens as men read the Torah on the first day of a pilgrimage at the Ghriba synagogue in Djerba, Tunisia May 9, 2012. - REUTERS/Anis Mili

A handful of Jews in Tunisia’s port city of Sousse woke up one day to a harsh scene. The city’s ancient Jewish cemetery looked as if a pogrom had taken place there. Overnight, someone had shattered gravestones, taken others apart and caused general destruction to the site. The attack caught the small Jewish community of a total of thirty people by surprise.

For dozens of years, since the end of Nazi occupation of the area, the Sousse Jews had not felt the long shadow of persecution. In this city that bears relics testifying to a Jewish presence dating back a thousand years, Jews have recently been feeling threats to their safety.

Yet the graveyard vandalism is not the first expression of anti-Semitism in Tunisia since President Zine El Abidine Ben Ali was deposed in January 2011. A short time after the coup, a synagogue was torched in Hamma. One Friday, Salafist demonstrators in the capital city of Tunis called for the murder of Jews in the name of Islamic law. Local merchants demanded that the cries of incitement stop, but the voices continued to reverberate for long months in the tense atmosphere. Afterward, the security services exposed a plan to kidnap a Jew for ransom. One of the members of the group planning the crime was a policeman.

The past two years have shown that the most dangerous time period for personal security in Tunisia are the weeks between Passover and Shavuot. Every year, on the Jewish holiday of Lag Ba’omer, Tunisian Jews celebrate the Hilula festivital of Rabbi Shimon Bar Yochai with great fanfare. Jewish tradition ascribes the kabbalistic Zohar text to Bar Yochai. It is customary for Jews from other diaspora communities to join the mass celebration.

On the eve of the celebration two years ago, a suicide-bomber cell from Libya was caught in Djerba. Detonator belts were found among the possessions of the cell members. A year later, a policeman was arrested just before Lag Ba’omer. He had planned to perpetrate a terrorist act on the celebrants. The policeman’s worried parents tipped off his arrest after their son had asked his mother for her blessing.

Tunisia’s security services view Jews as an integral part of Tunisian society and make efforts to protect them. President Moncef Marzouki paid a visit to the island of Djerba in April 2012 in an unusual expression of solidarity with the community. The visit took place on the 10th anniversary of the terrorist attack at the entrance to El Ghriba, Djerba’s synagogue, considered one of the oldest synagogues in the world. Twenty-one visitors to the site had been murdered in the attack carried out by al-Qaeda, most of them German tourists.

Today about 1,800 Jews live in Tunisia, with about 1,400 of them in Djerba. The rest live in the capital city of Tunis and in the cities of Sfax, Zarzis and Sousse. Among today’s Arab countries,Tunisia has one of the largest Jewish communities. Almost no trace remains of previous large Jewish communities, akin to the situation in Egypt, Iraq, Syria, Lebanon, Yemen and Bahrain. The number of Jews in these countries today ranges from isolated individuals to two hundred in each country. In addition to the concern of Tunisian Jews regarding terror attacks, they also face the spectre of economic distress. The entire country suffers from a drastic drop in revenue due to Tunisia's drop in tourism. The Jews, who mainly make their living from gold working and gold commerce, find themselves coping with a recession.

Tunisia is also currently in the throes of a severe political crisis that is leading the country to the same kind of abyss that Egypt has encountered. The latent tension between liberals and the religious that emerged after Ben Ali’s overthrow reached its peak in a political murder. Chokri Belaid, one of the country’s prominent liberal left-wing politicians, emerged from the doorway of his house one morning at the beginning of February. Anonymous terrorists waited near Belaid’s car and shot him to death. The Tunisian streets raged, leading to the resignation of the prime minister, a member of the moderate Islamic Ennahda party. The dismantling of the coalition, composed of both religious and secularists, added political discontent to the economic crisis. People are concerned over possible street riots that would pull Tunisia into a violent whirlpool, adding a third crisis to the country’s problems.

At the same time, security officials have detected a rise in Salafist influence, including the proliferation of Salafist weapons. Today’s Tunisia needs strong governmental institutions and political stability. Should the Islamists be dismissed from the government, the Salafist genie may be let out of the bottle. Every governmental foundation that is undermined — personal security, the economy, the political system — weakens the establishment and exposes the Jewish minority to the swords of those who conspire against them. Nevertheless, the Jews are not rushing to emigrate from Tunisia. In the last two years, only several dozen Jews left the country. Most of them came to Israel, and a minority went to France.

Every single person who spoke to us in the process of preparing this report did so on condition of anonymity. No one wants to incite Israel’s opponents or embarrass the Tunisian administration at this sensitive point in time. A high-placed national official in Jerusalem who is closely familiar with the circumstances of Tunisian Jews, told Al-Monitor that Israel is keeping close track of the Jewish community's situation, but prefers to keep a low profile.

“There are attempts to ensure the welfare of the members of the Jewish community, attempts also from sources outside Tunisia,” he said, but refused to elaborate further.

Jacky Hugi is the Arab affairs analyst of the Israeli army radio Galie-Zahal, a columnist for the Israeli business newspaper Globes and the former Arab Affairs correspondent for Israel`s Maariv daily.