Daoud Kuttab writes on the need for Israel to grant Palestinian journalists greater access and freedom of movement. 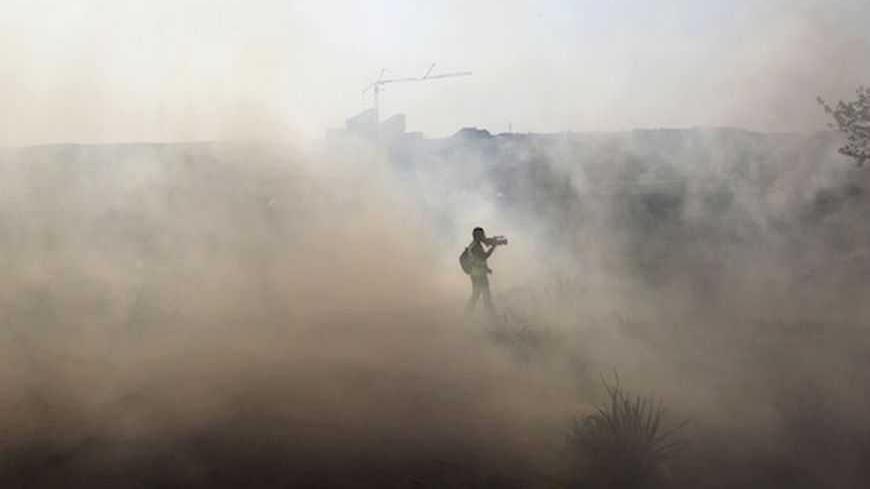 A journalist walks through tear gas fired by Israeli security officers (unseen) during clashes with stone-throwing Palestinians following a rally marking the 48th anniversary of the founding of the Fatah movement, in the West Bank village of Bilin near Ramallah, Jan. 4, 2013. - REUTERS/Ammar Awad

One of the most basic principles of journalism is the need for members of the press to have an opportunity to witness a particular event or have a chance to talk to their subjects. This principle applies to both Palestinian and Israeli journalists alike. But the reality in occupied Palestine is that this principle is far from being granted to members of the press, especially when it comes to those of the "other" side.

To begin with, it is important to state a fact that few people, including journalists, know. The state of Israel doesn’t recognize the existence of Palestinian media, and therefore the issue of granting Palestinian journalists any rights is not even an issue open for discussion.

Israel does recognize some Palestinian journalists, but the condition for this recognition is that they must work for a known Arab or international media outlet. So if you work for Al-Jazeera or the BBC and happen to be in Israel, there is a chance — and it is not automatic — that Israel would recognize you.

However, if you work for the Ramallah based Al-Ayyam newspaper, which began publishing after the Oslo Accords, or with Palestine TV, which was granted a license by Israel under the same accords, you simply don’t exist. This isn't some radical statement made by a Palestinian militant; this is the official Israeli policy as declared by the Israeli government press office.

International humanitarian law mandates that an occupying power must provide clearly identifiable documentation to journalists and protect them in times of conflict. Like all other rights, Israel doesn't implement these rights because it refuses to recognize any Palestinian media organization. The Israeli government press office won't issue press cards to Palestinian outlets and the Israeli army, which is in control of occupied Palestine, also refuses to recognize the media as a distinctive category. As a result, Palestinian media and their personnel are treated like the population under occupation, with the exception of those Palestinians working for international media.

Not only are Palestinian journalists barred from traveling to Jerusalem and other locations deemed by Israel as part of its state, but Palestinian journalists in Gaza can’t travel to the West Bank and vice versa. Some Israeli apologists say that, as a sovereign country, Israel isn't obligated to allow anyone to enter or pass through its country — which is required to traverse between Gaza and the West Bank. But freedom of movement in and out of Israel for Gazans is applied at the Jordan River crossings. So even if a Gaza journalist wants to travel all the way to Egypt and then to Jordan in order to reach the West Bank, they are not allowed to cross the King Hussein (Allenby) Bridge, which Israel controls.

This issue has recently received attention because the Hamas-led government in Gaza has decided to ban all media contact with Israelis, barring Israeli journalists entry into Gaza and banning Gazan journalists from working with Israeli media. Israeli journalists covering occupied Palestine have asked international organizations to intervene to help them visit Gaza. The authorities in Gaza have refused, saying that they might be open to allowing Israelis within dual citizenship to enter.

The Hamas-controlled Palestinian Journalists' Union has taken a different position. While they believe that their government should have taken its time before banning contacts with Israeli media, they suggest that one way out of this problem would be reciprocity. If Israel allows Palestinian journalists entry into Israel and the West Bank, suggested the union head, Yaser Abu Hein, to a visiting delegation of the International Press Institute, then Israeli journalists should be allowed to visit Gaza.

International media and other humanitarian organizations have not given priority in their public statements to importance of a thriving Palestinian media, as well as the need to provide its working members with the rights and privileges provided to members of the international media. Foremost of these rights is the freedom to travel freely in and out of occupied areas, and to have access to "hot" areas under Israeli control.