The inability of the Palestinian Authority to pay its employees a salary for the last three months is beginning to have serious repercussions, writes Omar Shaban. 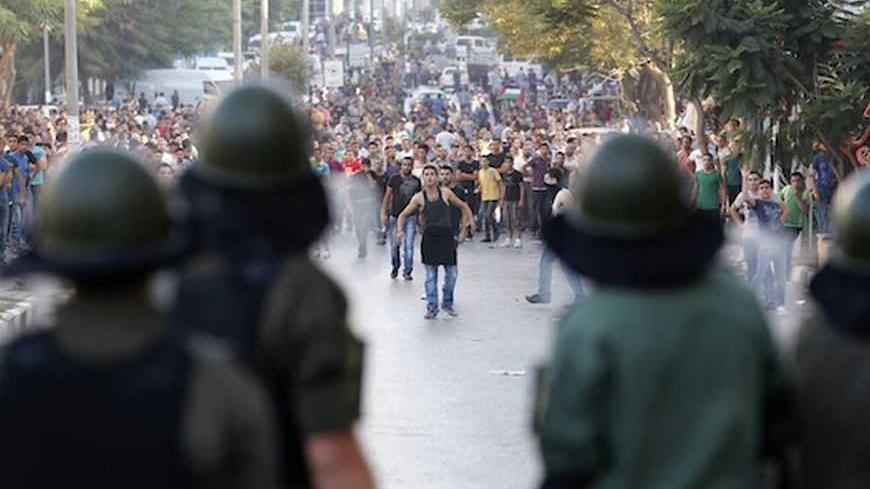 Palestinians security officers stand in front of protesters during clashes at a demonstration against high living costs and the government in the West Bank city of Hebron, Sept. 10, 2012. - REUTERS/Darren Whiteside

The financial crisis facing the Palestinian Authority (PA), which has left it unable to pay its employees, has had negative consequences for Palestinian society. The crisis has affected the PA’s popularity and the stability of Palestinian society, and it has increased anger and tension between the PA and the people.

During the three months of October, November and December, the PA paid its employees one month’s salary in two installments. Meanwhile, the Hamas government has managed to pay its employees on a much more regular basis.

Ever since the Palestinian split in June 2007, the Hamas government in Gaza and the PA in Ramallah have competed with each other on several levels — especially their ability to pay their employees and demonstrate their sound management. To be sure, the two governments are very different in terms of the number of employees and the size of their monthly expenses, but the crisis has weakened the PA's position in its competition with Hamas.

While the PA spends $205 million on monthly salaries for its roughly 160,000 employees in the West Bank and the Gaza Strip, Hamas’ monthly wage bill for its 42,000 employees in Gaza amounts to $37 million. The PA’s annual budget for 2012 reached about $3.9 billion, while the Hamas government’s budget for 2013 was estimated at $890 million. Furthermore, the Hamas government does not assume any financial responsibility in the West Bank, as opposed to the PA, which continues to pay the salaries of its 55,000 employees who have stopped their work in the Gaza Strip.

The inability of the PA to meet its salary obligations has at least five major consequences:

The PA’s inability to pay its employees — in the midst of soaring prices and inflation rates that were not accompanied by an increase in wages — have led to popular protests across the West Bank over the past two years. These protests have raised doubts as to the PA’s ability to survive and continue its political program. Demonstrators have demanded a minimum wage of $400 per month, and many have waved placards demanding the dissolution of the government of Palestinian Prime Minister Salam Fayyad and the PA itself.

Moreover, the government’s officials in the West Bank have been on strike, demanding that the government pay employee’s salaries. These protests and strikes have been accompanied by accusations of corruption against some government consultants. The government has also been accused of indifference to the seriousness and repercussions of the crisis.

2.    Deterioration of national indicators and stagnation of economic activity.

These indicators are used to measure average growth, the well-being of people and the gross domestic product (GDP) of a country. The government’s spending, including on salaries, represents a key GDP driver. Governments are bound to pay their employees not only to enable them to meet the increasing cost of living, but also in order to stimulate the domestic economy, encourage households to consume, increase market movement and create new job opportunities. As in a game of dominoes, the decrease in government spending negatively impacts the government's ability to pay its bills for education, health and social services. It also leads to a reduction in Palestinian purchases from Israel, which reduces the value of tax transfers (clearing) collected by Israel and transferred to the PA.

The PA’s employees provide for nearly one million people, representing 25% of the total population. The crisis of salary non-payment has pushed the low-ranking administrative employees into the pit of poverty, as they have lost their only source of income. Irregular salary payments have increased direct dependency in Palestinian society. The dependency ratio has reached 7:1 — meaning that every salaried worker provides for seven non-working persons who are of legal working age (15 to 60 years old). The PA’s employees have turned from breadwinners into dependent members.

The high dependency ratios reflect the depth of the crisis. In light of the high unemployment rate and irregular salary payments in the public sector, the private sector and civil society now have the upper hand in production.

This has caused a devastating imbalance to the economy, social relations and the system of values and ethics. Salaried workers are directly providing for those close to them and indirectly supporting the rest of society. They are financing health services, education, transportation, and are paying duties and taxes, which is taking its toll on the whole of society. People have become worn out, as the dependency requirements exceed the breadwinners’ abilities. Dropout rates have also increased, not to mention early marriages for girls, rising divorce rates and falling marriage rates.

4.    Poor Palestinian bureaucracy and a dwindling sense of belonging.

The government is a country’s main source of strength and its main tool for development. The existence of a qualified government is one of the prerequisites for achieving human development. The salary crisis has produced a sense of futility among public sector employees, weakening their desire to go to work and limiting their ability to perform their jobs. This has caused the bureaucratic system to become inactive, plagued with absenteeism and deepening sense of futility. Monthly salaries do not represent an appropriate financial payoff for employees, and do not reward their expertise and qualifications.

Due to intermittent salaries, households have had to restructure their basic purchases and expenses. Some families began to dispense with unnecessary spending, including leisure activities, trips, buying books and going to the theater. Other households have had to stop sending their children, and especially daughters, to schools.

Re-prioritizing spending has happened at the expense of food, beverages and clothing. Some household have stopped consuming expensive food products like meat and fish in favor of bread, rice and legumes, which are less expensive but which have less nutritional value. This will ultimately lead to poor levels of public health, reduced life expectancy, poor mental and physical health, and diseases like osteoporosis, anemia and malnutrition — especially among children.