A Syrian official says Damascus is in principle open to dialogue, but not with preconditions, reports Jean Aziz. 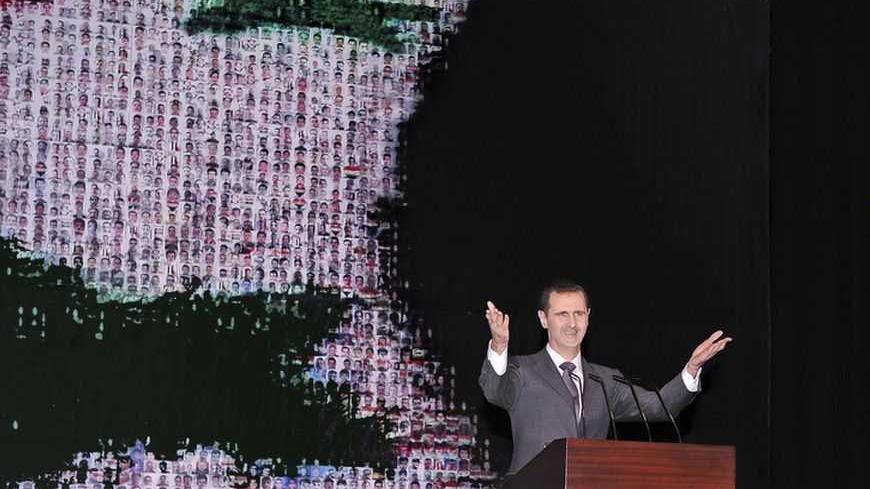 Official photo of Syria's President Bashar al-Assad speaking at the Opera House in Damascus, Jan. 6, 2013, when he presented a new peace initiative, which his opponents dismissed as a ploy. - REUTERS/Sana

A high-level Syrian official has confirmed that the government in Damascus is open to dialogue initiatives to resolve the ongoing crisis, in particular because Moscow continues to advise Syrian authorities that they must respond to international initiatives in order to improve the regime’s image abroad and to provide their allies with something with which to endorse them. The Russians have also been emphasizing that the armed Syrian opposition faces a dilemma regarding whether to engage the regime in dialogue: agreeing to a compromise — thus forfeiting their call for toppling the regime and therefore possibly further dividing their ranks — or refusing to compromise, which could lose them diplomatic clout.

Despite recognizing the benefits of dialogue, the Syrian official, during a brief visit to Beirut, said that there are two considerations determining the way to deal with such initiatives.The first involves what the regime refers to as "sovereign issues." For instance, the same official stresses that by agreeing to negotiate with only a single, specific Syrian official, the opposition is undermining the dialogue before it even starts, or rather, is confirming that the opposition has no intention of seriously engaging in dialogue. It is obvious that the Syrian official is referring to a statement by Moaz al-Khatib, head of the National Coalition for Syrian Revolutionary and Opposition Forces, suggesting Syrian Vice President Farouk al-Sharaa as an acceptable negotiator for a dialogue with the regime.

The official asserted that “this cannot happen, we can never agree on any preconditions to negotiate,” especially since the regime settled that issue at the time of the current government’s formation. Former UN envoy Kofi Annan — on July 8, 2012,  during his last meeting with President Bashar al-Assad — suggested a dialogue between the conflicting parties and that Assad nominate a representative for it. On that same day, Assad told Annan that Ali Haidar, minister of national reconciliation, had been tasked with the mission. Since Haidar is the head of a wing of the Syrian Social Nationalist Party, he is (from the Baath Party’s point of view) a member of the internal opposition that agreed to take part in parliamentary elections held on May 7, 2012, and to participate in the current Syrian government. Sources have confirmed that Annan had at the time questioned Assad about Haidar’s ability to accomplish his mission. Assad replied that Haidar was completely capable of representing the government as well as the Syrian president, since their relationship goes back to the early 1990s, when they were classmates as ophthalmology students. Syrian officials did not, of course, reveal a hidden element behind selecting Haidar: On May 2, 2012, his son was killed by jihadists, which given the implied sensitivities, complicates Haidar being suggested as a negotiator.

The Syrian official asserted, "The importance of the issue is not limited to the fact that we reject any conditions imposed by insurgents, but that we also want to make sure that those negotiating with us are powerful on the ground or are capable of actualizing whatever may result from dialogue. This very point seems intractable. It is very well known that the regime in Syria makes decisions, commits to them and compels others. But who is responsible on the other side of the conflict? Who is capable of showing commitment and compelling militants? These questions are yet to be answered.” He also revealed that an aide to Lakhdar Brahimi, Annan's successor, had told Syrian officials that his team had to that point counted 134 armed groups in Syria, all working independently of each other, without any group having authority over the other. “Who would we negotiate with?” he mused.

According to the official, the second consideration — the balance of power on the ground — will determine the boundaries of any negotiation between the parties to the conflict. "Since the conflict began, the Syrian army has not been led to any confrontation at any point or time. It has been the one to call the shots and to initiate strikes and confrontations. Therefore, what some may see as a setback or loss in a specific location is actually part of planned and studied military tactics on the part of our army," the official contended.

He then asserted, "With the exception of a narrow strip on the Syrian-Turkish border, where direct intervention by Ankara led to obvious security and military chaos, the remaining Syrian territory is still under the control of the regime in Damascus, despite the fact that there are armed opposition strongholds in many areas. The Syrian army, however, is capable of taking care of them at any moment, should it decide to do so."

Does this tactic aim at degenerating the ranks of the opposition on the one hand, while trying to prove to the West and the international community on the other that the jihadist elements are dangerous? The Syrian official abstained from answering but confirmed, however, that the regime "is still in control of the military situation, and this is what has been witnessed in Daraya, in the southeastern suburbs of Damascus."

The official explained that more than 10,000 gunmen had gathered in a densely populated residential area in which about 300,000 citizens live. This situation prompted "the Syrian army to quietly work on limiting the insurgents and then isolating them from the civilian population in preparation for the third step, which consists of resolving the situation in Daraya. This will constitute a significant change in the security and military scene in Damascus, thus affecting other Syrian areas in which insurgents are spread."

As the official left Beirut, the information being received from his country contradicted much of the military scenario he had tried to craft, a contradiction that only proves one point — the conflict in Syria is not likely to end anytime soon.

Jean Aziz is a contributing writer for Al-Monitor’s Lebanon Pulse. He is a columnist at the Lebanese newspaper Al-Akhbar and the host of a weekly political talk show broadcast on OTV, a Lebanese station.