Rubio Says US Should Give Ammunition to Syrian Rebels

Sen. Marco Rubio, a possible candidate for president in 2016, urged more U.S. support for Syrian rebels and cast doubt on the likelihood of success of negotiations with Iran. 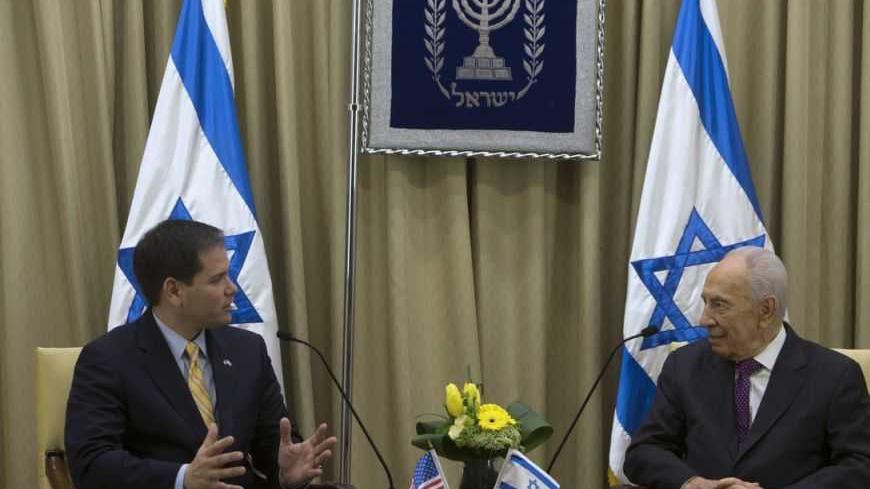 Florida Sen. Marco Rubio, a rising star in the Republican Party and possible 2016 presidential candidate, said Wednesday [Feb. 27] that the United States should provide ammunition and intelligence to elements of the Syrian opposition to help it defeat President Bashar al-Assad and gain influence after Assad falls.

Speaking to the Washington Institute for Near East Policy shortly after returning from a trip to Israel, the West Bank and Jordan, Rubio said it was important to counter the power of anti-American, radical elements that otherwise might dominate Syria in a post-Assad period.
“There is real resentment building among the Syrian opposition that the West in general and the United States in particular has abandoned them,” Rubio said. “There is a real risk that when Assad falls … the largest and best equipped [groups] will be those against our national interest.”
Rubio’s remarks came as there are reports that the Barack Obama administration may be considering a more forward-leaning posture toward Syrian rebels.
Secretary of State John Kerry is due to meet with the leader of the Syrian Opposition Council in Rome Thursday [Feb. 28]. While Kerry has stressed that the United States seeks a "negotiated outcome" to the two-year conflict, he has also said that he has some new ideas to present and that Washington will not leave the Syrian opposition“twisting in the wind” as the death toll rises beyond 70,000.
Beyond Syria, Rubio delivered a veritable tour of Middle East issues, speaking fluently without consulting any notes. He took a sip of water from a mug before beginning and pointed to a big pitcher of water on a table next to him, joking that “this is a bit much.” Rubio was lampooned for interrupting his live televised response to President Barack Obama’s State of the Union address by grabbing and drinking from a plastic water bottle.
Rubio, a member of both the Senate Foreign Relations Committee and Select Committee on Intelligence, expressed skepticism about reports of progress in talks between Iran and the five permanent members of the U.N. Security Council plus Germany. The two sides agreed to hold technical meetings in Istanbul next month and another session at the level of political directors in Kazakhstan in April.
“I personally believe that the Supreme Leader has concluded he wants a [nuclear] weapon,” Rubio said. “I hope there is a breakthrough in negotiations… but I don’t believe that will happen. I believe negotiations are just a ploy to buy time.”
On other issues, the senator said:
• He supported Jordan’s constitutional reforms as “an important step as long as it is the first step in a process of multiple steps.” Rubio added that he was concerned that in his discussions in Jordan, “I didn’t see a clear and concise plan to grow the economy.
• The downfall of the Assad regime is “the ultimate sanction against Iran” because of its role as a base and conduit for support for anti-Israel and anti-U.S. groups.
• The time was not ripe to resolve the Palestinian issue but that more could be done to bolster Israeli security and improve the daily lives of Palestinians in the West Bank. “That begins to create the conditions where a breakthrough is possible,” Rubio said.
In Israel — on his second visit there since 2008 but his first as a sitting senator — Rubio, a Cuban-American, showed no daylight between his views and those of his hosts. He told reporters in Israel: “There is no more important relationship for the United States, perhaps in the world but certainly in the region, than Israel.”
Asked by Al-Monitor Wednesday if there was any Middle East issue on which he disagreed with the Israeli government, Rubio suggested that he was willing to allow more time for sanctions to impact Iranian decision-making even if in the end, he did not believe sanctions would convince Iran to give up what Rubio called the regime’s “ultimate insurance policy” of nuclear weapons.
“We have to give it a chance but time will eventually run out on the process,” Rubio said, without specifying when that might take place.
Rubio’s articulate performance — if not all his views — won kudos from the audience and his hosts.
“He was impressively conversant with the issues,” Rob Satloff, executive director of the Washington Institute and the moderator of the discussion with Rubio, told Al-Monitor. Rubio showed “a great sense of nuance and detail and was quite creative in some of the issues he put forward.”
Barbara Slavin is Washington correspondent for Al-Monitor and a senior fellow at the Atlantic Council where she focuses on Iran. She tweets @BarbaraSlavin1.