The Campaign to Save New York's 'Little Syria'

Todd Fine outlines the campaign to save what's left of the historic "Little Syria" neighborhood on Washington Street in New York City. 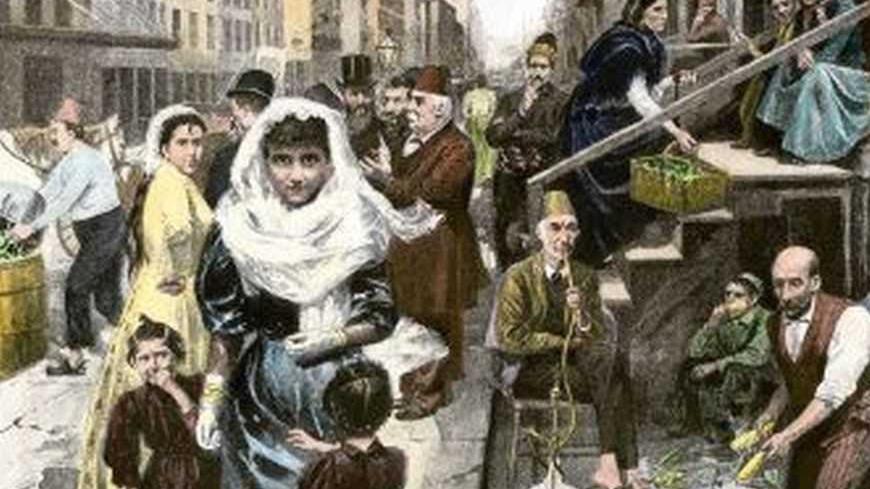 For the oldest living generation of Arab-Americans and for the youngest Arab-American activists now rediscovering their heritage, a walk in downtown Manhattan brings tremendous feelings of loss and foreboding.

From the 1880s to the 1940s, a world-famous center of Arabic-speaking life, business, literary culture and journalism existed along Washington Street in the lower west side of Manhattan. Most structures were destroyed in large property-seizure actions supported by the government, the first instigated by New York dictatorial icon Robert Moses to build the Brooklyn-Battery Tunnel and the second with the construction of the World Trade Center. No other major ethnic Manhattan neighborhood of the period has been devastated as thoroughly as “Little Syria,” and one can empathize with the pain of a Lebanese-American former resident like Marian Giachi, who told the BBC World Service, “It’s not nice. It’s sad to see, I really mean this.”

Now, the final remaining sliver, an extraordinary trinity of buildings on Washington Street (a Melkite church, community center and final tenement that huddle together in a field of skyscrapers and hotels sprouting like mushrooms), stands in danger of being destroyed, damaged or structurally weakened.

Ten years ago, in 2003, the well-known New York City historian and tour guide Joseph Svehlak wrote a manifesto arguing that these last landmarks of Little Syria should be preserved in order to recognize the people of many diverse ethnicities (including his own, Moravian) who lived in this forgotten residential neighborhood in the financial district. He and his colleagues in the Friends of the Lower West Side group succeeded in a six-year appeal to the Landmarks Preservation Commission to designate the exquisite St. George’s Syrian Catholic Church as a city landmark, and now the fight to protect the other two buildings continues as I and Carl Antoun, a twenty-one-year-old college student whose ninety-three-year-old grandmother grew up on Washington Street, have taken up the banner through the “Save Washington Street” campaign.

In an irrelevant coincidence, this same neighborhood was the approximate site of the attacks of Sept. 11, 2001. Mentioning this fact is unavoidable for the simple reason that it is the easiest way to convey the location to many people. Associating Arab-Americans with Sept. 11 has always been an absurdity, and therefore we have focused almost entirely on the social history and the architectural qualities of the remaining buildings. The only legitimate conflation, in our view, of the two topics is that Arab-Americans have suffered after Sept. 11 to explain their history in the face of racism and suffocating stereotypes, and that, therefore, protecting the Washington Street heritage in downtown Manhattan would help younger Arab-Americans bolster their identity and self-esteem in a confusing and infuriating cultural environment. The value of this limited aim is still a floating question. Under the rubble of the South Tower of the World Trade Center, excavators found the cornerstone of St. Joseph’s Maronite Church, and the National September 11 Museum has not yet decided if this fact, along with the existence of Little Syria, will be mentioned in the section of its permanent exhibit addressing the post-attack excavation and the history of the area before the towers (including “Radio Row”).

Our campaign strives to be true to history and explore the Washington Street neighborhood in terms of its stories and the people who lived there, including esteemed writers such as Ameen Rihani, Kahlil Gibran, Mikhail Naimy and Elia Abu Madi. We will leave the battles over terminology and labels — such as whether to refer to the neighborhood as “Arab,” “Lebanese” or “Syrian” — to others. There are valid debates to be had, perhaps, but protecting the last remaining buildings from destruction does not require a consensus about such terminology.  Our goal is to be inclusive in making the case for Washington Street as a historic cultural landmark for both Arab-Americans and the city of New York.

Outside the maddening Twilight Zone of distracting political baggage, there is a strong and straightforward case to be made to save Washington Street and advance its memory.

First, the architectural qualities and social history of these buildings justify a basic hearing under the Landmarks Law. Alongside a strong coalition of Arab-American, Greek and Armenian groups, the leading historic preservationists in New York — including at the Historic Districts Council, City Lore/Place Matters and Columbia’s historic preservation program — have signed letters to the Landmarks Preservation Commission and its Chairman Robert Tierney advocating the designation of these buildings.

The Colonial Revival architecture of the Downtown Community House, which provided services to the immigrants, makes an overt visual statement that links the extraordinarily diverse collection of “Little Syria” immigrants to the foundations of the country, and we produced a substantial report this summer articulating the architectural argument. Little Syria has already been uniquely devastated by severe eminent-domain decisions, and the Landmarks Preservation Commission, after viewing numerous Community Board resolutions and letters signed by thousands of people, should evaluate this request fairly and schedule a hearing to allow interested parties to make their case for these last buildings on their merits.

Second, preserving these structures and possibly creating an Arab-American cultural center (devoted to the neighborhood’s literary contributions, religious diversity and tenement life) would educate New York, the United States and the world about the importance of Washington Street within the American story. Little Syria, as a location, has already become one of the most significant tourist destinations globally (with the Sept. 11 memorial and the Statue of Liberty ferries attracting 10 million-plus yearly visitors), and the popularity of writers like Gibran, alongside constant curiosity about Arab contributions to the United States, would ensure many pilgrims and wide appreciation for a decision to preserve this lonely but crucial cluster. Bolstered even further by a calligraphic memorial to the writers which could be built in a local park, Mayor Michael Bloomberg and President Barack Obama could deepen their symbolic legacies by saving Washington Street.

Third, the intellectuals of Lower Manhattan remain extremely popular in the Arab world, and their work still seems highly relevant to the issues of our day. Ameen Rihani, in particular, who grew up on Washington Street and whose life will be better visualized if these buildings are preserved, played a singular role in Arab history through his 1920s travels, in which he met many rulers and emirs and instigated his own personal foreign policy in pursuit of high ideals. (A few weeks ago, we did a special with Al-Jazeera that explicitly connected the “Little Syria” preservation crisis to Rihani’s memory.) Anchoring our valuation of Washington Street, as a physical place, on the memories of Ameen Rihani and his fellow writers would help us to reconnect to a healthy, thoughtful and established basis for Arab-American contact, relations and dialogue.

Far beyond comforting the young activists and older residents who have been working so hard, protecting these three buildings and memorializing Ameen Rihani and his cohort of writers will transform American notions of Arab-American history and identity. Our campaign’s appeal should be taken seriously, and the Landmarks Preservation Commission should immediately schedule a hearing to allow this coalition to make its case.

Todd Fine is the co-founder of the "Save Washington Street" campaign and the founder and director of Project Khalid, an effort to celebrate the centennial of Ameen Rihani’s The Book of Khalid (1911).