Israelis on Facebook Ask: Obama, Come to the Square

Israelis are hoping that US President Barack Obama will speak at Rabin Square and renew a sincere and friendly dialogue, writes Nadav Eyal. 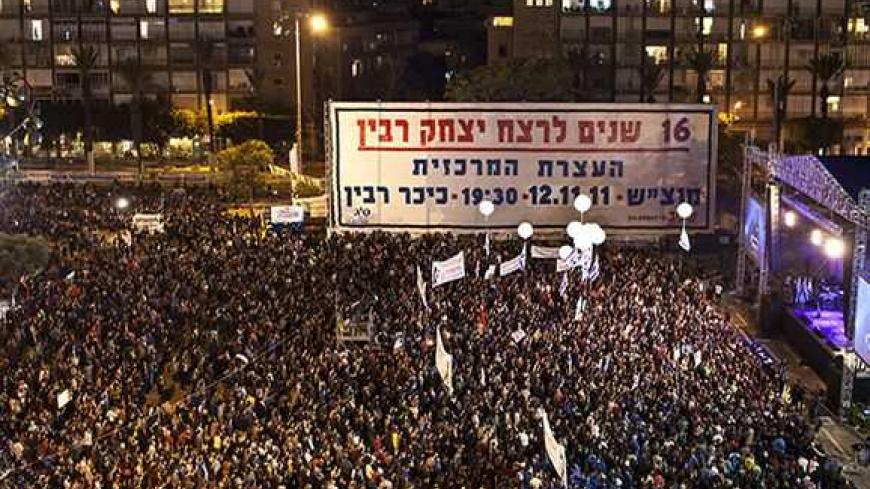 In the interest of full disclosure, I did not come up with the headline for this article. It’s the headline of a Facebook page started on Wednesday, Feb. 6 by Israelis who want the American president to come to Rabin Square in Tel Aviv and speak directly to the Israeli public. This request touches the deepest cords of Israel’s collective consciousness and expresses a desire that is more than just a social network event. Israelis want to conduct a conversation with US President Barack Obama. More precisely, they want him to start talking to them.

Over the past four years, the US-Israeli public dialogue has been confined to very narrow arguments. These include the personal relationship between President Obama and Israeli Prime Minister Benjamin Netanyahu, the extent of the US security commitment to Israel, Israel’s commitment to the peace process and even Obama’s personal sentiments toward the Israelis. Into this morass there seeped off-the-record briefings to reporters, mutual and uncomplimentary character assessments, recurring crises of confidence and above all, a sense of continuous discord.

Many Israelis — I believe the vast majority — have absolutely no doubts regarding Obama’s personal commitment to Israel’s security and to the extent of the contribution mounted by the previous administration to this security. The prime minister is being blamed in the United States for placing himself squarely as a Republican supporter in the recent elections, and in Netanyahu’s circles, Jeffrey Goldberg’s famous column (which read that Obama regards Netanyahu as a “political coward”) is being treated as payback and blatant interference in the Israeli elections. Let us assume, after this brief summary, that it takes two to tango.

Both in terms of history and of substance, US-Israeli relations amount to much more than this trading of blame. The shared interests of both nations, as well as the fundamental principles upon which they both were built, have established the foundation for fruitful dialogue. As an Israeli, I will allow myself to assume that this is productive for both sides. But also, and no less important, it’s about the inside stories Israelis and Americans tell themselves. When cynics attacked Obama during his first run for the White House, saying he was offering false hopes, he responded in his famous New Hampshire speech that “in the unlikely story that is America, there has never been anything false about hope.”

I believe this sentence is true just as much for Israel’s story, perhaps even more so; Jews heard over and over again that their national dream was impossible, and over and over, people like Zionist visionary Theodore Herzl and former prime ministers David Ben-Gurion and Menachem Begin reiterated that in Israel’s vocabulary, there’s no such expression as “impossible.” They adhered to the national anthem, "Hatikva," which is Hebrew for “The Hope."

Success against all odds, an ability to change and grow in the face of mighty challenges, conservation of liberty under every pressure — the Americans and Israelis are close in spirit, above and beyond clichés. The last elections proved that Israel, like America, can reinvent itself. Those who wrote off Israeli society were wrong; Israel’s flexibility and healthy logic still beat strongly. They are humming to the tune of change.

President Obama, come to the square and talk to the Israeli public. Come to the place where an Israeli prime minister was assassinated in the grueling battle for peace. Come to the place where Israelis convene in times of joy and sadness, to celebrate what singer Arik Einstein dubbed “the adventure of our life,” the improbable story that is Israel. Or come to any other square, any other place where people can freely convene. Such a gesture will be more important than any wreath you lay or any promise you grant.

The square will be full. Israelis yearn for a conversation with you, for a new dialogue with America. As a friend of Israel — its most important friend in the world — you are the one who can conduct such a dialogue with sincerity and clarity. As a friend, it is your duty to tell us hard truths, if necessary, and we must understand that the responsibility for our lives and for changing our lives is ours alone. If you come to the square, you will understand Israel better than through any speech in the Knesset. But even if you make do with our parliament, know that the Israelis are listening intently and that the things you say, and have said in recent years, have and will resonate loudly.

Nadav Eyal is a contributing writer for Al-Monitor’s Israel Pulse. He directs Chanel 10's foreign news desk and was formerly a political reporter and European correspondent for Maariv daily. Eyal was named one of the hundred most influential people in the media for 2011 by the Israeli business magazine Globes.