Each Side of Syrian Conflict Claims Israeli Strike in Its Favor

Following the Israeli aerial attacks on Syria, each side of the Syrian crisis questions the intentions behind the seemingly spontaneous offensive by their southern neighbor, writes Jean Aziz. 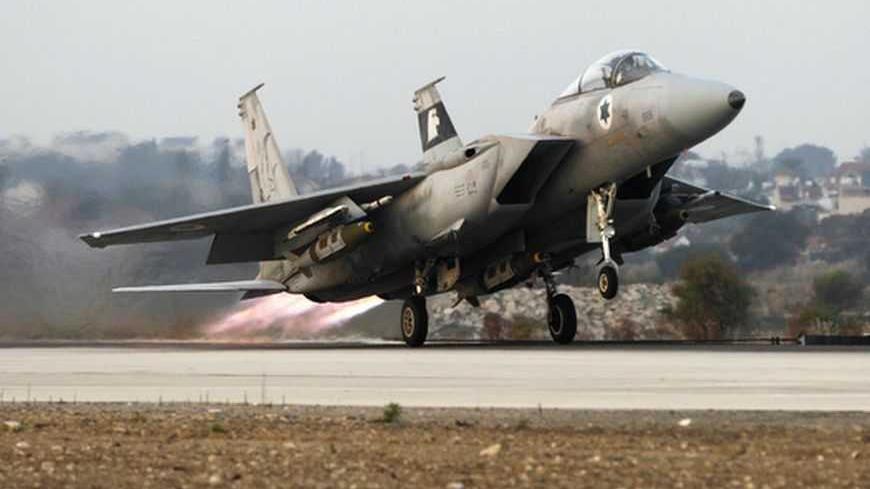 An Israeli air force F-15E fighter jet takes off for a mission over the Gaza Strip, from the Tel Nof air base in central Israel, Nov. 19, 2012. - REUTERS/Baz Ratner

Beirut may be the only city in the region where you can meet — on the same street or in adjacent cafes — representatives of the two parties involved in the conflict in Syria and hear from them concrete information, rather than mere readings and analyses. For example, the Israeli air raid that targeted Syrian sites near Damascus on Jan. 30 is interpreted in two accounts from Beirut: Israel carried out a raid against Syrian President Bashar al-Assad, or Israel raided on his behalf!

News reports, especially in the Western press, discussing the Israeli air raid on the outskirts of Damascus raise the same general questions: Has the Assad regime crossed a red line — or almost crossed one — prompting Tel Aviv to deter it? Did the Assad regime cross a red line by possessing non-conventional weapons, or by attempting to transfer such weapons to Hezbollah? Or by allowing Iran to transfer weapons to this Lebanese Shiite organization?

Both supporters and opponents of the Syrian regime who are based in Beirut and active in political and media discussions rule out these possibilities, and consider them secondary in the search for reasons for the raid. They provide contradictory analyses reinforced with credible arguments.

Pro-regime Lebanese sources who have visited Damascus say that the Syrian officials consider the air raid on Damascus to be a message to Washington and the West. According to these sources, some Damascus officials saw the raid as a fiery protest message by the authorities in Tel Aviv against the settlement proposals for the Syrian crisis coming from Western capitals. Syrian officials believe that Israel is very upset about the meetings taking place in Dublin and Munich, and about the statements being made by Syrian opposition officials, including Ahmad Moaz al-Khatib and Haytham Manna, and their acceptance of dialogue initiatives with the regime. The sources add that Israel is especially upset about the Western sponsorship in general, and US sponsorship in particular, of this direction.

The sources say that the appointment of John Kerry as Secretary of State and the nomination of Chuck Hagel as Secretary of Defense must have increased Israel’s discontent. Thus, Tel Aviv decided to send a message to all of these parties in its own way, saying: "We are not content with your efforts to resolve the Syrian crisis."

For all these reasons and others, Damascus officials believe that Israel has an interest in the continuation of war in Syria. It certainly prefers this to a victory by the regime, which could help it regain its influence domestically and regionally. Israel also prefers this to a victory by the Syrian opposition, especially after the rise of fundamentalism within its ranks, which raises concerns about the approach of jihadists to Israel's borders.

However, US-Russian-Western efforts to find a solution or compromise have emerged in spite of Israel's strategy. Thus, Tel Aviv decided to issue a red card against this “offside” attempt.

Syrian officials believe that this Israeli tactic is known and has been used previously. They cite a similar raid by the Israeli air force on a Syrian facility in Sept. 5, 2007 on the grounds of it being a nuclear-reactor project in cooperation with North Korea. However, Damascus interpreted the move as a fiery protest message by Israel against the West’s openness toward Syria after the election of President Nicolas Sarkozy in Paris and his launch of a new political process to approach Assad in coordination with Western countries, Qatar and Saudi Arabia. This attempted rapprochement translated into a series of weekly visits by aides to the French president, Claude Gueant and Jean-David Levitte, to the Syrian capital. This new policy resulted in great convergence between Assad and Sarkozy, which lasted until the outbreak of the Islamic revolutions and the parting of Doha and Riyadh from Damascus.

On the other hand, representatives of the Syrian opposition adopt the conspiracy theory that the Israeli raid targeted them and aimed to strengthen Assad. The Syrian opposition agrees with the regime’s analysis that Israel does not favor a victory of the armed opposition in Syria. However, it adds, Israel prefers to see Assad in power, as his regime has established full calm on the Golan front for over 40 years, and helped to push the Palestinians toward the Oslo Accord after having encircled and targeted them in Lebanon.

As for how the Israeli raid on the Damascus suburb could be interpreted as in support of Assad, the opposition reveals that they have intelligence that the leaders of the Syrian opposition decided last summer to move the battle to Damascus and conclusively end it without continuing the battles taking place across Syria. The opposition adds that the leaders themselves — after two failed attempts to enter the capital, the first in July and second in December — had decided to execute an operation to overthrow the city from within. According to this plan, thousands of opposition insurgents would infiltrate the Syrian capital in the form of sleeper cells. Scores of explosions and car bombs would hit Damascus all at once, which would lead to a complete state of chaos, panic and fear. According to the same account, the opposition was betting on creating such a situation and activating their sleeper elements in Damascus to trigger the residents of the Syrian capital to launch a mass popular protest movement, take to the streets and squares and hold mass riots, which would force Assad to step down.

However, according to the opposition account, the Israeli raid placed two obstacles before this scheme: First, it allowed the regime to impose strict security inside the capital immediately after the raid, whereby it was divided into 250 security zones. Second, the raid evoked feelings among Damascenes that Assad is targeted by the "Israeli enemy," which helps to quell any popular uprising against him. The opposition sources conclude that Israel carried out the air raids in the interest of Assad, not against him, whether knowingly or unwittingly.

Thus in politics — unlike in physics — one incident can produce two completely contradictory explanations.