Palestine Should Not Wait for Obama

Senior Fatah official Husam Zomlot speaks to Daoud Kuttab of the need for Palestinians to press ahead with their own strategic track, and not wait for the United States to impose a solution. 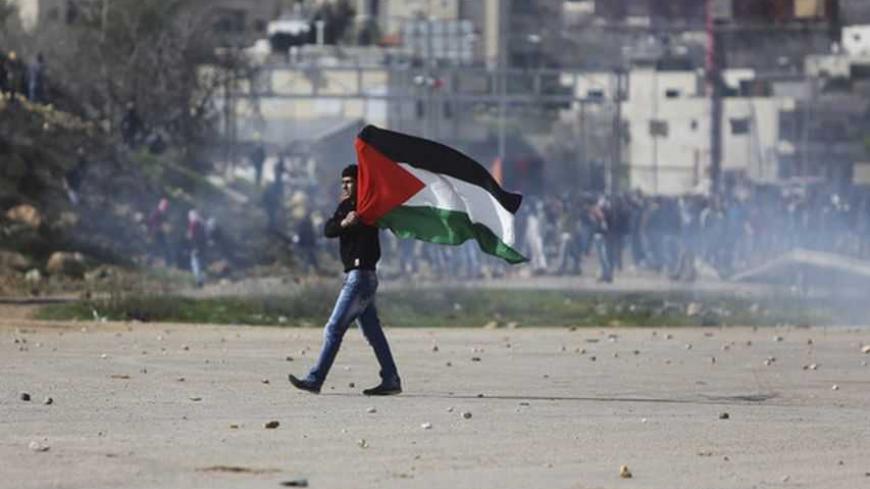 A Palestinian protester holds a flag during clashes between protesters and Israeli border policemen outside Israel's Ofer prison near the West Bank city of Ramallah, Feb. 15, 2013. - REUTERS/Mohamad Torokman

As Palestinian political strategists are in the process of preparing for the first visit ever of President Barack Obama to the state of Palestine, new thinking is emerging. Instead of routinely preparing for a set of demands and tactical gains to be accomplished, some are worried that the visit might slow down a paradigm shift that has been taking place in the direction of the Palestinian leadership.

One of the young rising stars in the Fatah movement, Husam Zomlot, explains to Al-Monitor the new thinking using a sports metaphor, “For 20 years, we have been playing on someone else’s playground, according to their rules, their fans and even their referee.” Zomlot  says that the playground is the peace process as it stands now, which treats both parties as equal, requires that they come to a compromise on their own with each side giving a little, with some possibilities of confidence-building measures in the process.

The former Harvard and London School of Economics scholar explains that "in this paradigm, ending illegalities like military occupation, depopulation and colonization, segregation, blockades and apartheid policies are not unconditional obligations as should be the case under international law, but considered Israeli gestures of good will and painful compromises.”

"The purpose of controlling and keeping the process is exactly to prevent the outcome" and that "no matter what you do within this framework, it's designed not to challenge the status quo, but to comfort it," he insists.

Zomlot, who is director of Fatah’s Foreign Relations Commission, believes that what is urgently needed is a radical paradigm shift from the current framework into one that disempowers the occupation and enables the Palestinian people to utilize their strengths, seize emerging regional and international opportunities and better face the many challenges surrounding them. He points out that while the Palestinian 1988 initiative of declaring a state in the West Bank and Gaza gave birth to the idea of the two-state solution, the agenda for how to achieve the endgame was controlled by others.

For the Palestinian strategist, the big problem has also been the referee. “The US has been the one and only arbitrator in this conflict.” Zomlot rejects that the US is incapable of solving the conflict. He ticks all the times from Eisenhower, to Bush Sr., until now that the Americans have proved very capable when they choose to act. In his interpretation, the problem has been that Washington has been unwilling until now to take a decisive stand.

The decision by the Palestinian leadership to request UN state recognition has now qualified Palestine to move ahead in the process that could produce results. According to Zomlot, the biggest obstacle in the way of the political breakthrough is the current Israeli lack of a sense of crisis or urgency, partly caused by a culture of impunity that Israel enjoys. The idea of utilizing the international political and legal systems, including the International Criminal Court, together with the popular nonviolent struggle in Palestine, would eventually produce results, namely raising the cost of occupation and settlements to a level that would enable a future Israeli leadership to argue for ending and dismantling them.

Until now the Israelis are enjoying the best of all worlds. They have a cost-free occupation that is also producing high quality security and little painful international condemnation. For Israelis, the Palestinian issue is a zero-sum game with little room for major changes in attitude.

The reframing of the Palestinian agenda will not happen overnight and this is why Zomlot is worried. He fears that the visit of the US president, if not backed by a plan and strong political will, might slow down the process of creating the Palestinian/international "playground." While he acknowledges that Palestinians have an interest in a US re-engagement in the political track, Zomlot stresses that the Palestinians must press ahead with creating a simultaneous strategic track, what he called “a national and global sanctions campaign against occupation.” This can only be achieved through the evolving framework that is a rights-based approach and has international rules as the only reference.