Tulin Daloglu writes that Israel’s strategic partnership with the Republic of Cyprus, including over Mediterranean gas fields, is yet another complication in Israeli-Turkish relations. 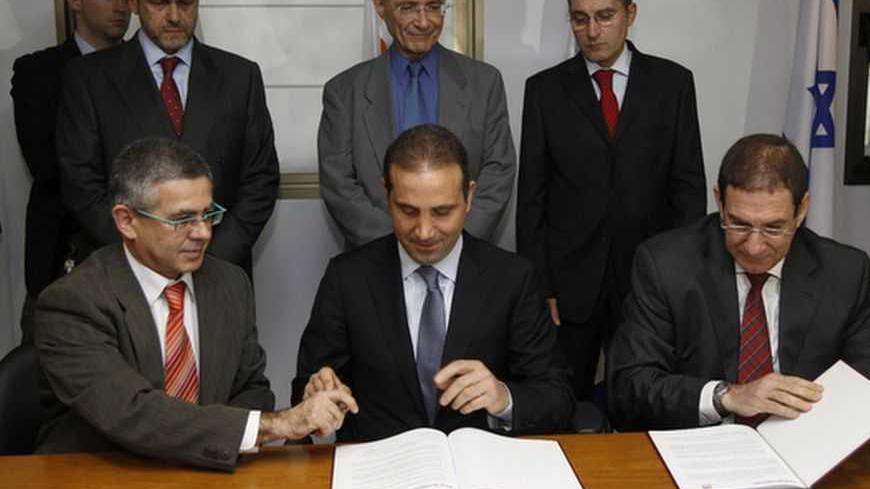 In November 2007, Israeli President Shimon Peres and Palestinian President Mahmoud Abbas jointly addressed the Turkish parliament, an event that buttressed Turkey's role in the region as an honest broker for peace. The Peres address was the first ever by an Israeli president before a Muslim parliament.

Turkey and Israel at that time were weighing the construction of an “infrastructure corridor” between the port cities of Ceyhan and Haifa, which would have included five separate underwater pipelines for oil, natural gas, electricity, water and communications. There was also speculation that these pipelines could go through Northern Cyprus.

That, however, was a red line for Greek Cypriot Foreign Minister Erato Kazakou-Marcoullis, who feared that Israel would thereby legitimize the Turkish side of the island when Nicosia had overwhelmingly rejected a United Nations proposal for a referendum in May 2004 on reuniting Cyprus, and despite that it had been accepted by the European Union as a full member.

In order to get reassurance from the Israeli side that their strengthening of ties with Ankara would not come at the cost of damaging their stiff position toward the Turkish Cypriot side, Marcoullis visited the Jewish state in December, only a month after Peres and Abbas made their historic appearance before the Turkish Parliament. No action she took scuttled proposals for a Turkish-Israeli “infrastructure corridor,” but developments in the region conspired against it.

The discovery of hydrocarbon fields in the eastern Mediterranean made things even more complicated for the Turkish side. Turkey's European Union accession talks received mixed blessings. "The Greek Cypriots completely disconnected themselves from the Cyprus issue, but made Turkey's EU accession directly dependent on this conflict," Ergin Olgun, an advisor to the President of Turkish Republic of Northern Cyprus (TRNC), told Al-Monitor. "This has to be recognized as a serious diplomatic victory."

Moreover, in January 2009, Turkish Prime Minister Recep Tayyip Erdogan strongly reacted at the World Economic Forum in Davos to an Israeli air raid on the Hamas-controlled Gaza strip, and stormed offstage after a heated debate with Peres. Tensions between Ankara and Jerusalem peaked following the Mavi Marmara crisis in May 2010, when Israeli soldiers killed nine Turks on a flotilla off the shores of Gaza.

As the Turkish-Israeli relationship deteriorated, Greek Cyprus and Israel started to build a strategic partnership. In February 2012, Benjamin Netanyahu became the first Israeli prime minister to visit Nicosia, where he agreed with President Demetris Christofias to launch a joint natural gas and oil exploration venture in their adjoining territorial waters. Speaking to Al-Monitor, Mehmet Ali Talat, former president of the TRNC, summed up this new close friendship in the region as, “my enemy’s enemy is my friend.”

“Why did Israel not even attempt to have any close ties with the Greek Cypriot side when it was at a good standing with Turkey?” he asked. “Christofias and I joined demonstrations before we both became presidents to condemn Israel for its aggression to the Palestinians, and joined the crowds together marching to the Israeli embassy. When we both became presidents, we released a joint condemnation of Israel’s attack to Lebanon in 2008. To my knowledge, Christofias was a die-hard Israel enemy.”

Nevertheless, the Greek Cypriot side claims it has no desire to act against the interests of the Turkish side. “This should not be perceived as a threat to Turkey,” Nikos Christodoulides, spokesman of the Greek Cyprus Presidency of the EU, told Al-Monitor. “Cyprus is exercising its sovereign rights. We consider this as our legitimate right. We don’t have talks with Turkey because it does not recognize the Republic of Cyprus.”

And that’s the crux of the issue. It really doesn't matter whether the world only recognizes the Greek side of the island as the legitimate representative of the whole of Cyprus, and that it’s only Turkey that recognizes the TRNC. The United Nations is still attempting negotiations to resolve this conflict.

In fact, there were high hopes when Talat become president following the late Rauf Denktash, who was known as uncompromising and an advocate of dividing the island. Talat dedicated his personal and political life to the reunification of the island and had been boldly outspoken about the mistakes of the Turkish side.

Surely, the Greek Cypriot side believes it has an advantage as the only internationally recognized representative of the island. “The Turks approached many governments, and asked to open diplomatic missions in the north,” said Marcoullis during a visit to Israel in 2007. “But the international community is committed to the resolutions of the UN Security Council and thus no country in the world maintains relations with an illegal entity.”

Dervis Eroglu, president of TRNC, told Al-Monitor that the Greek side heavily benefits from this status quo and desires to assimilate the Turks of the island by way of osmosis. He says there is no incentive out there that would really push the Greek side to even consider a fair solution to this conflict. “However, if the international community opens the UN Security Council resolutions 541 and 550 into a debate, that prevents the countries to recognize the Turkish side as a legitimate country; and if the UN Security Council ends the mandate of the peace force on the island, only then the Greek side can seriously consider getting to the table for reaching a solution,” he said. Seriously though, no one should really expect the UN body to take such a bold step.

“We won’t immediately start profiting from this finding,” said Christodoulides. “It has been agreed that the natural wealth of Cyprus will be shared through the budgets of the constituency when there is a solution.”

Yet Eroglu told Al-Monitor that this issue has to be addressed now to secure the rights of his people. “I proposed to the Greek side through directly engaging the UN secretary general and offered them to establish a committee that would be composed by equal number of Turkish and Greek Cypriots, where they would assess the profit made from these hydrocarbon fields, and put our share to a bank account accordingly,” he said. “I suggested that we use that money to sort out the economic challenges once we decide on the terms of the unification of the island. But the Greek Cypriot president turned it down without a second glance.”

In short, Cyprus still remains as a conflict zone until the parties to this issue reach an agreement as to whether to continue as a united or divided entity, and they need to sort out in a civilized manner how they’re going to share the island’s wealth. The international community should be a facilitator in this direction. Yet Eroglu argues, “I’m not convinced a hundred percent that the US, Great Britain and Israel really want to see a resolution to this issue. Their interests openly clash with the Russians.”

For Russian interests, as Olgun explains, the continuation of the Cyprus issue is a desirable outcome. “As long as this issue remains unresolved, because of Turkey’s standing on Cyprus, it will not be possible to see NATO fully embrace the European security and defense policies.”

Still, Israel shouldn't get engaged with yet another long communal conflict — as if dealing with the Palestinian issue isn't enough — until the Turkish side’s share in the natural wealth of the island is assured. Greek Cyprus isn't like any other sovereign state, and any attempt to violate the rights of the Turkish side is considered a direct rebuke to Turkish sovereignty. While the current political atmosphere between Ankara and Tel-Aviv is at a stalemate, a sealed agreement under today’s conditions between Greek Cyprus and Israel would kill all the possibilities for healing the rift between Israel and Turkey. And if that’s what the Jewish state calculates as in its best interest in the long term, it shouldn't hesitate to go ahead in its joint venture with the Greek Cypriot side. But common sense might suggest otherwise.